Drew Brees isn’t the only Texan leading the New Orleans Saints: Johnson City’s own Rita Benson LeBlanc emerged as a the public face of the Saints’ management in the wake of Hurricane Katrina.

In a 2400-word profile on espnW, Elizabeth Merrill describes how the 35-year-old Texas A&M graduate—and the Saint’s much beloved part owner and executive vice president—holds her own in the male-dominated world of professional sports management.

LeBlanc can somehow fit in anywhere, in a boardroom full of execs, at an art exhibit, or on the streets with fans. Everything she does, six years since Katrina, is still geared toward promoting New Orleans. The granddaughter of billionaire Saints owner Tom Benson is savvy, goofy, outgoing and kind, but she also gives off a don’t-eff-with-me vibe.

Born in Cut Off, Louisiana, LeBlanc grew up as a bookworm on a ranch outside Johnson City. Saints fans in Texas (they do exist . . . in signifigant numbers) will appreciate that, when describing herself, LeBlanc tells people she has “Texas heart, Cajun blood.”

LeBlanc worked her way up through the Saints’ various departments, winning over anyone who wrote her off as the “owner’s grandkid” with her inquisitiveness and competence.

After Katrina, LeBlanc blossomed under pressure. “The Saints had to re-examine their brand after Katrina, and they took a look at their image and their role in the community. LeBlanc was a big part of the restoration project,” Merrill writes. LeBlanc was also instrumental in bringing next year’s Super Bowl to the city and advocates for the city every chance she gets. 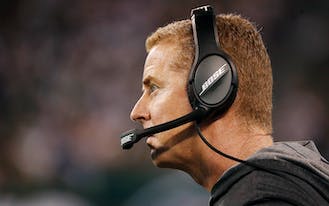