Or not quite night. Baldwin stood for a moment, let his thoughts fade into the stillness and his eyes adjust to the flatland twilight smoldering like a brushfire out there somewhere. It was startling then, right then, how dead it was. How there was nothing to keep the distance out. How the noise of the TV back in the bar seemed like the ticking of his worn-out, blown-up engine cooling down. Joe Newby leaned against the tailgate of his pickup, throwing up. “Oh, crap,” he’d say and throw up some more. It was a real nice pickup—one of those big crew-cab diesel pickups. Newby was trying to aim away. “Oh, crap. Oh, crap.” At last he took a deep breath, stood up, and said, “Oh, crap,” and then, “Get in.”

Just past the bank they took a sloppy, skidding turn onto a dirt road heading straight out into the great expanse of hard and scrubby nothing-in-particular, over a dip that made Baldwin wince against the silence of the tools that were not in the big chrome toolbox, headlights bouncing into the sky. They lurched left across a cattle guard and then, as if they’d run into a rock, stopped, with all the dust they’d sucked along behind them settling through the beams that shone upon an aging double-wide with an unfinished, tacked-on porch and the pallid light of a TV flickering in the window. Left in the truck exchanging glances with a pit bull tied to a post, Baldwin reassured himself that this was probably not the home of someone with a numeral after his name. He closed his eyes. A lingering trace of Newby’s discomfort mingled sadly with the smell of brand-new pickup. After a minute he opened the door, observed the length of dog rope that now was pulled taut in his direction, and stepped into the night to find a bush. Unhappy sounds came from the trailer. A woman’s voice. Shrill and uncertain. Suddenly quiet. Then the TV off and quiet all the way out to the horizon.

Newby’s boy sat in back in the middle looking at Baldwin. Ten or eleven maybe—hard to tell. Retarded almost certainly. Not the obvious kind—not Down syndrome or anything like that but something missing, something empty, skewed, looking back at Baldwin in the faint green glow from the dash.

“He likes stuffed monkeys,” Newby confided. They were heading out of town now to the west. “Them kind with the floppy arms and legs, you know?” Newby looked at Baldwin. Baldwin nodded. Then they were quiet for a while.

The subtle brightening up ahead could have been the fair or, given their rate of speed, the sun coming up again. They topped a rise, and it appeared as if all the life that seemed to have been sucked out of the town, or maybe every little town throughout the years, had come out here. So far away out in the dark all by itself, the fair shone like an idiot’s dream of heaven. There was a struggle with the seat belt in the back, and then Newby’s boy leaned in between them, eyes wide, fastened on the glory with an uninterpretable look, like terror maybe, in another, but in this case who could say.

Baldwin stood by the truck, looked back and forth between the lights of the fair and the full moon rising blood-red over the Permian Basin, flat and dark as that ocean people smarter than Baldwin said all this used to be.

“Why in the hell’s it way out here?” Baldwin looked at Newby across the hood.

Newby finished hitching up and tucking in and straightening up his boy, whose eyes remained fixed on the lights. “They had a bunch of trouble last year with the sheriff.” He came around with the boy in tow, a little steadier than before. “Right there’s the county line.” He nodded back at the road.

Newby’s boy had his jeans stuffed into fancy red boots so large that if he were to fall asleep, they’d probably hold him up. It took an effort to get him moving past the nasty-looking ticket-taking clown, but after that he did okay just scuffing along behind his dad from ride to ride, but only to watch. They stopped at the carousel for quite a while—the animals, not just horses but all kinds, were carved with the strange exaggeration of the key fobs at the motel. Baldwin fingered the little wooden horse in his pocket, looked back at the moon, still red though now above the dart throw and the ringtoss just behind. There didn’t seem to be much fair as such—some empty folding tables near the entrance might have held competing cakes and pies, but not now. Baldwin turned to find a cup of beer thrust at him. Newby drained his, then knelt with a huge pink wad of cotton candy and gently turned the boy to face him, wrapped the boy’s hand around the paper cone, and said, “Okay, let’s do it.” From the other end somewhere a burst of hoots and shrieks and brutal-sounding laughter, then they’re standing at the dart throw, where, beneath a ruddy moon, a floppy monkey might be won.

“The what?” The carny had that hollow, skinny, trouble-with-the-sheriff sort of look.

“Ain’t got no monkeys,” said the carny, Zeus-like fist of darts extended. “We got SpongeBobs.”

Newby said nothing, stepped aside to let a giddy high school couple have a go. Screams from the Twizzler or the Sizzler or whatever that tilting, spinning thing was called seemed to fling out into the night. The giddy couple wandered off with one of the idiotic stuffed square-headed prizes. “What the crap’s a goddamn SpongeBob?” asked Newby. His boy stood at the barrier, gazing upon the yellow cartoon characters as upon some revelation, holding his untouched cotton candy like a torch.

The moon had climbed out of redness into angry yellow-orange. It seemed like the hoots and screams of the rides themselves, the animals on the merry-go-round, had joined the overlapping carnival melodies in a general sort of howl. Newby slapped down his money, won two consolation prizes—bright-red plastic water pistols—then got lucky. Baldwin wound up with the cotton candy and a water pistol in each pocket; Newby took the beer, his boy the SpongeBob. They drifted now, caught up in the noise. Between the rides and booths and concessions Baldwin would catch a glimpse of moonlight on the caliche out there and wonder if the real animals were watching like they must have watched the crazy fire-lit goings-on a thousand years ago.

They drifted naturally toward the center of the wildness, where the whoops and shrieks were loudest and a pretty good crowd had gathered to appreciate the antics of a bunch of good old boys in their hilarious abuses of a “Gunslinger” game—dropping and rolling, bouncing off the flimsy structure, nearly jerking out the cable to the laser-shooting six-gun. “Ahh, you got me,” gasped the mechanical desperado, who was no match for these cheaters, running up the score and threatening the carny to the delight of all assembled, especially Alexander Johnson III, in a gaudy Western shirt, who, Baldwin noticed, even so far from his stern financial protocols out here in the dusty, bloody streets of Dodge, maintained command, egging on the drunkest one to do his worst. And then, as the plug was pulled and the tinny “Oh, Susanna” piano music stopped and the drunkest one threw down his laser six-gun and turned to look for the vanished carny, there was Newby’s boy standing all alone with his SpongeBob, now beneath his gaze. The drunk was having too much fun to lose the crowd. He made a face and crouched in front of the boy, as if to draw his six-gun, and, receiving no response, waved a meaty hand in front of his eyes. Baldwin looked around for Newby, who must have gone for a beer. The drunk squinted at the boy and, running through his well-thumbed list of school yard tactics, plucked the SpongeBob, held it up next to the boy, then asked if all did not agree it looked just like his little brother.

There was laughter and the splash of a cup of beer hurled to the ground as Newby shoved past. Baldwin grabbed his belt and hauled him back and doubled him over with an elbow under the ribs. Baldwin walked up to the drunk, retrieved the SpongeBob, and returned it to its owner, who he sent back toward his dad. The moon had faded into a sad, exhausted yellow. Baldwin placed the grungy cotton candy in Alexander Johnson’s hand, then turned to the drunk, whose smirk had lost conviction. A little breeze came off the desert. Baldwin drew his water pistols and showed them all around, the way the drunk had done with the SpongeBob. Then he shoved one into the drunk’s jeans pocket, put the other into his own, backed away a step, but just a step, and said, “Now draw, you silly, stupid sonofabitch.”

A balloon blew past like a tumbleweed. From somewhere a voice said, “Roy, come on. He’s crazy.” Then again, from a little farther off: “Roy, come on.” Then Roy backed away and everyone was gone with the ghosts. Baldwin listened for the laughter that he knew would come eventually, but it didn’t. On the way back Newby said nothing. Newby’s boy sat with his SpongeBob, gazing upon it as if he had always loved it, always held it in his heart.

Chapter Four, by Amanda Eyre Ward, in which a hungover Baldwin is haunted by his past. 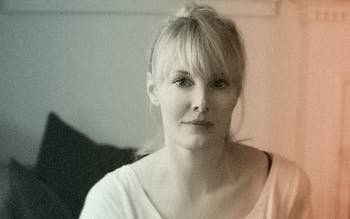 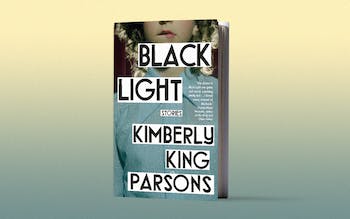 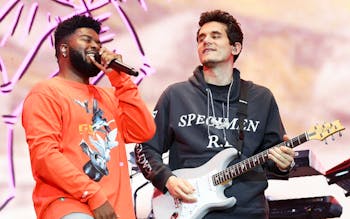 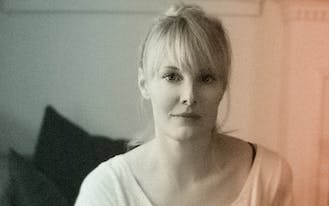 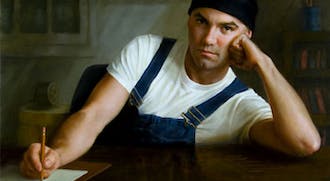 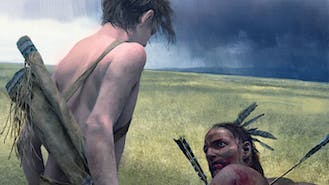 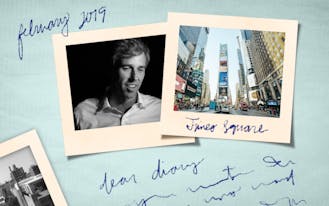 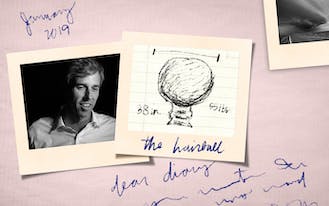 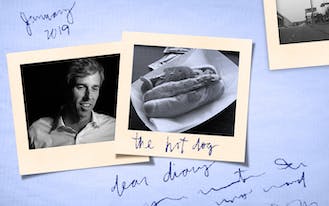 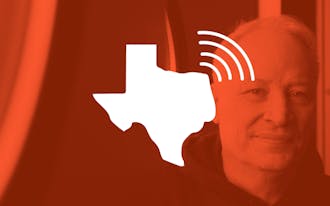 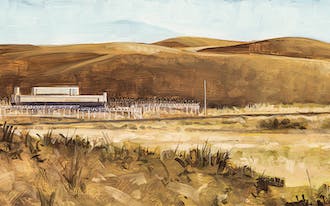 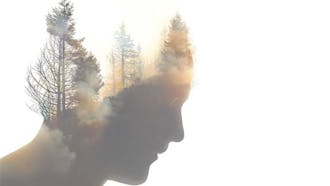 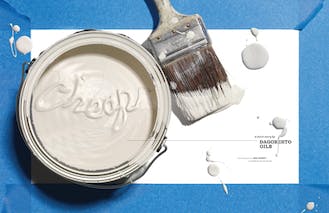