Demolition experts from Maryland rigged MD Anderson’s Houston Main Building, located at 1100 Holcombe Boulevard, with 1,250 explosives and pushed the button on Sunday. “It took 17 seconds . . . for the first skyscraper built outside of downtown Houston to turn into a pile of dust and rubble,” Naheeda Sayeeduddin wrote in the Houston Chronicle.

The sixty-year-old building originally housed the regional headquarters of Prudential Insurance, but was taken over by MD Anderson some two decades later, Sayeeduddin wrote. The last MD Anderson employees moved out of the building two years ago.

Due to a heavy fog, the demolition was delayed more than three hours, to 11:15 a.m., allowing the brunch crowd a glimpse at the destruction:

MD Anderson decided that the building’s asbestos and a sinking foundation made demolition a more practical solution than rehabbing the space.

“This building was a beehive of activity in the 1970s, but it lost its usefulness over the years,” Steve Stuyck, MD Anderson’s vice president of public affairs, told CultureMap Houston‘s Tyler Rudick. “I really dragged my feet when we had to leave . . . We all have great memories of this place.” (CultureMap‘s story is accompanied by a great slideshow of the demolition.)

When it was dedicated on July 29, 1952, the Prudential Building was the second modern skyscraper to be built in Houston. Houston architect Kenneth Franzheim and his chief designer, Anton Skislewicz, imbued the building with a sense of urban style and suburban comfort that was never quite equaled in any of Franzeim`s other Houston projects. The ground level walls of the Prudential Building are clad with deep red polished Texas granite; the upper floors on the northwest and northeast sides are clad in Texas limestone. The southwest and southeast sides, though, were faced with a ‘unique full-height aluminum an arrangement… that will utilize solar rays and air circulation to effect economies in air conditioning.’

The building also featured an olympic-size swimming pool and a tempura mural painted by Peter Hurd that depicted a ranch scene titled “West Texas Farm.”** That mural was transferred to Artesia, New Mexico, where it will be restored and displayed at the town’s public library, the Chronicle reported in 2010.
**Correction: A previous version of this article misstated the name of the mural, referring to it as “The Future Belongs to Those Who Prepare For It.” We regret the error. 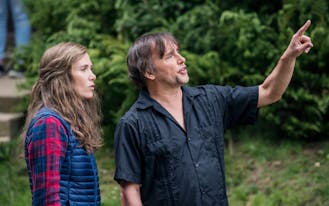