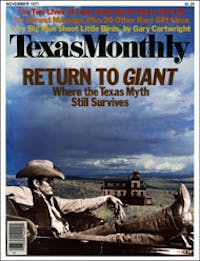 Remember that play with the wonderful parody title, The Roar of the Greasepaint—the Smell of the Crowd? It pretty much sums up crowds, theatrical and otherwise. We all end up in crowds from time to time, but no one in his right mind chooses to get stuck in one for long. Which brings us to an interesting subject: the private box.

Opera houses, those bastions of culture, have row upon row of boxes where rich people in fancy evening clothes with lorgnettes go to spy on each other. The most expensive and exclusive private boxes these days, though, are not at opera houses or cultural centers. They are in, of all things, professional sports arenas. There, high above the throngs or nestled down close to the field in the best sight lines, you will find several dozen sanctuaries where rich people wearing $75 jeans or Western-cut leisure suits go to drink with each other and watch the game on closed-circuit television.

At its most basic, the stadium box is a way the hoity-toity can separate themselves from the hoi polloi. (It’s so unpleasant to be jostled by someone wearing blue jeans and a T-shirt from Penney’s while you’re trying to concentrate on the action.) At its most extreme, the box is a vehicle for the conspicuous display of wealth and, hence, power. Whether bought or leased, a stadium box costs thousands of dollars, probably more than your first house. Because only the very wealthy can afford them, it is only natural that they have become yet another extension of private clubs, airplanes, yachts, and retreats where the rich and influential conduct their daily affairs. Viewed in this light, a stadium box has about as much to do with sports as a convention banquet has to do with nourishment.

With this in mind, we went to the three best professional stadiums in Texas to look at some of the private boxes and talk to the owners. Would you, we asked, allow Texas Monthly to photograph your box and publish a few words about it? Fat chance. The big-bucks corporations, which invariably have the most lavish boxes, turned us down flat. Why? Because, as they freely admitted, they didn’t want their stockholders to know where the money was going. Fortunately not everyone was so skittish. We persisted and came up with three private boxes that show you what it’s like to be rich, or a friend of someone who’s rich, and go out to the old ball game.

The Summit, newest of the big three, was conceived by Greenway Plaza developer Ken Schnitzer to round out the billion-dollar complex of offices, restaurants, shops, and theaters. Much smaller (only 17,094 seats) than the other stadiums, the Summit is definitely the most attractive from a design standpoint. Sitting amid the tall buildings of the plaza, it creates visual excitement through the use of bright lights, colors, and banners. Architects with Kenneth Bentsen Associates designed the stadium, with Lloyd, Morgan and Jones (the same firm that worked on the Astrodome) as consultants.

The Summit caters unabashedly to the upper crust, and all things considered, it provides a lot for the money. A mere $20,000 a year will lease a minimal but tastefully decorated suite, 14 by 24 feet, with ten seats, a wet bar, bath, and closed-circuit TV, with season tickets for the basketball and hockey seasons thrown in. All twenty suites are furnished alike except for different color schemes and are located on, and open to, the top row of the stadium.

The showplace of the Summit is the flashy Greenway Plaza Suite, which is used to entertain friends and business associates of the plaza. The Schnitzers wanted a design with some “pizzazz” and employed the architectural firm of Golemon and Rolfe to do it. Architects Allen Rice and Jim Gwin designed a box of solid mirrors and glass with red neon tubing describing the perimeter. No one was eager to discuss what this extravaganza cost, but by the square foot it was undoubtedly more than the cost of building a luxury home.

The brainchild of Judge Roy Hofheinz, the 9 ½-acre Astrodome is the biggest stadium in area in the country. Despite its overall lavishness (6000 tons of air conditioning and 50,000 padded seats), it has, oddly enough, the lousiest private boxes of the big three. The notable exception to this rule is the Hofheinz Suite. Before he sold his interest in the Dome, the Judge had not one box but a complex of extravagantly decorated rooms. Hollywood set designer Harper Goff, genius of 20,000 Leagues Under the Sea and Fantastic Voyage, did all the rooms in the gaudiest style imaginable. Besides the quarters where Hofheinz at one time lived, there is a floor for guests, which includes a nursery, bowling alley, putting green, shooting gallery, kitchen/dining balcony, and a wacky Victorian saloon (with slanted floor and walls and other funhouse gimmicks). On the top floor in the same suite is the Caribbean Room, which has the only legitimate box seats in the stadium. It is used under contract by the home teams and the corporations that now own the stadium lease. It is a long, narrow room decorated in Polynesian style with thirty chairs looking out onto the playing field. Last, but certainly not least, is a mock gothic chapel for all faiths, complete with interchangeable stained-glass windows. Hofheinz built it after finding that bullfighters wouldn’t perform in a place with no chapel. The cost of the Hofheinz suite was in the hundreds of thousands of dollars, which shows to what lengths some people will go to entertain their friends.

By contrast, the regular private boxes, called skyboxes, were merely an afterthought, tacked on after construction of the Astrodome began. Architects Lloyd and Morgan will claim no responsibility for them. It was the Judge’s idea to put the elite at the top of the stadium, mistakenly thinking that aristocrats sat at the top of the Roman Coliseum. No matter. In the Astrodome, these are the worst seats in the house, far too high for the spectators to see what’s going on below. Besides this, the boxes themselves are merely narrow, enclosed rooms behind the seats where you can get a drink or something to eat. The Astrodome decorated these boxes in 1965 to the specifications of leaseholders, but today they are dated and rundown. The fans must be more interested in sports than flash, because no one seems too concerned with their somewhat shabby appearance. All the boxes are leased for this year’s football season.

Ninety-six per cent of the skyboxes are leased by corporations, and the management doesn’t hesitate to sock it to them. First, the owners have to pay for a block of stadium seats in increments of 24 or 30 in order to get the use of a box. The tickets to see the Oilers are $17.50 a seat per game, and they must be purchased on a seasonal basis. Add to this the expense of entertaining business contacts, and it is small wonder that the owners of the Astrodome boxes have chosen to let them go to pot.

At Texas Stadium the box seats are the best in the house. The stadium was the dream of Clint Murchison, Jr., Texas millionaire and owner of the Dallas Cowboys. A football fan and something of a purist, Murchison has always thought that the game should be played outdoors but that cover should be provided for the fans on cold, rainy days. When the stadium was designed, architect A. Warren Morey created a 65,000- seat, bowl-shaped arena with an uncovered playing field “to provide all the creature comforts for the fan” and still allow the game to be played under normal weather conditions. The 178 private boxes are the most spectacular thing about the arena. Located between the upper and lower levels, the 16-by-16-foot cubicles look directly onto the field, which gives the viewer a feeling of being part of the crowd without the inconvenience. Each air-conditioned space is rather like a comfortable living room that seats twelve people (and one bartender). The stadium sold 158 of these boxes at a shameless $50,000 each. They leased the other 20 suites for $10,000 to $15,000 a year as part of package deals for corporations that included minimal decorating of the box, season tickets for football and hockey games, parking places, memberships in the Stadium Club, and one minute of advertising on the large electronic scoreboard for every commercial event in the stadium. Unlike many other stadiums in the country, Texas Stadium consistently makes a profit.

Fifty thousand bucks for four concrete walls and a floor is a lot to pay, considering it could take another $15,000 to $25,000 to put in plumbing and furniture and cover the surfaces. Most of the owners have hired interior designers and architects, and the results are quite lavish. In order to have larger spaces, some corporations knocked out walls and combined two or three boxes. Others resorted to mirrored walls and vaulted ceilings to give the illusion of space. A few are tasteful enough for the likes of Architectural Digest; others are outrageous, ranging from saccharine French Provincial to fake African. The cost, including purchase and decorating, easily runs from $240 to almost $300 per square foot.

The owner of one of the most appropriately decorated boxes, David McDavid of McDavid Pontiac in Dallas, said he was initially hesitant to pay $50,000 for a box on the 35 yard line, so he took a week to think about it. In the meantime, the box was sold and the only one left was on the 10 yard line. He promptly bought it, rationalizing that “all the seats in the stadium are good anyway,” and hired Fred Miceli to decorate it in a “Western motif that wasn’t country.”

That’s what he got. The box is well designed and great fun because it reminds one of Texas without being overdone. It is filled with antiques—“from all over the world,” says Miceli—which gives it a warm, comfortable feeling. The cost of the decor was $25,000 to $30,000, and it was obviously a good investment: McDavid was recently offered $165,000 for his box after Tony Dorsett was signed by the Cowboys.

With all the money needed to use and maintain such fancy sports arenas, it is not surprising that three of Texas’ most prominent millionaires were involved in their planning and financing, although the good people of Texas were also allowed to kick in their share, through the sale of bonds of various types.

And if these aren’t enough, there’s more to come. On the drawing boards right now are plans for a new sports arena in Dallas dreamed up by Mayor Bob Folsom to be financed largely through the sale of revenue bonds.

Buddy can you spare a grand?