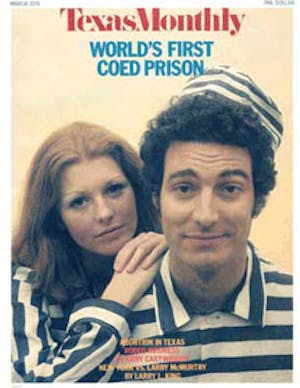 Better known for his paintings, the French Impressionist artist Edgar Degas saw only one of his seventy-three sculptures exhibited in his own lifetime. Admirers of his work today are more fortunate. Seventy pieces, on loan for the first time from New York’s Metropolitan Museum of Art, are currently being shown at Dallas’ Museum of Fine Arts. They include his much-admired statue of a young ballerina, Petite Danseuse.

POLITICIAN, THY NAME IS WOMAN

Just before the Riggs-King tennis matches last fall, some women from the National Women’s Political Caucus called Gladys Heldman, editor of World Tennis magazine and organizer of the women’s pro tour, to tell her they were going to fly down from New York as a group to cheer Billie Jean King on.

Heldman discouraged them from coming.

“If she wins, is that going to give us 30 women senators?,” she asked. “If she loses, is the women’s movement dead?”

Instead, Heldman offered to help them with another plan which would not be identified with professional tennis but which would, as she explains it, “make people aware that 51 percent of the population is not being directly represented.”

That’s how the “1974: The Year of the Woman” Forum was hatched. Feminist editor Gloria Steinem, Congresswoman Barbara Jordan, and Texas Democrat Sissy Farenthold, among others, will try to raise money for local and national women’s political caucuses, with an eye toward boosting more women into elective office. Both men and women are welcome to attend.

A man named Hamilton Smith patented the photographic process known as tintyping, back in 1856. The idea became all the rage among Civil War soldiers who sat before the cameras and sent an inexpensive, durable image back home to their loved ones. This picturesque art form prospered for a couple of decades and then gradually yielded to roll film techniques.

Now it is being revived. Howard E. Hillard & Company—three young Houstonians who describe themselves as “Purveyors of Ancestral Portraits using the Original Wet Plate Photography of the 1850’s”—have been making the rounds of Texas folk festivals photographing customers at $10 per tintype. To facilitate nostalgia, they supply a choice of various 19th-century costumes for the subject to wear.

If you can’t wait around to catch the Hilliards at a fair, they will do your tintype by appointment, same price, in their Houston studio. The whole process takes about 15 minutes.

What do Cambridge, England, and Cambridge, Massachusetts, have in common? Well, for one thing, each is the destination for regular shipments of a special salad dressing that’s manufactured in a little, one-room shack in Austin, Texas. I. R. “Peanuts” Smith has been making his La Martinique Salad Dressing for twenty-five years, eight gallons at a time, and his mail-order customers can be found practically anywhere expatriate Texans have settled. For 59 you can buy six-ounce bottles of his poppy seed, French, remoulade, or blue cheese dressings (French is the best) at the better grocery stores around the state. Or you can order a case of twelve bottles directly from him for $6.50 plus postage, and get a pamphlet of “Salad Hints and Recipes” in the bargain.

In an era when everything on your grocer’s shelves seems to spring from the corporate recesses of Kraft Foods or some other giant conglomerate, there is something wistfully reassuring about a product that’s still made by the Company President’s own hands—hands that are swollen from laboriously and painfully peeling several pounds of choice garlic and onions every morning—and then hand-packed and labeled by his three employees. Time was when everything was made that way.

No one ever said tennis was a poor man’s sport and despite the increasing popularity of the game, it’s definitely not headed in that direction.

If you have the money, however, and want to improve your game while taking a little vacation, you can do it at April Sound Recreational and Resort Community, under the guidance of top pros Rod Laver and Roy Emerson. The Laver-Emerson Tennis Weeks open March 10, inaugurated by the Glenn Campbell Celebrity Tennis Tournament, and run through May 18: ten weeks of tennis clinics, with intensive on-court training and a holiday vacation besides.

The pursuit of rattlesnakes is a long-standing Texas tradition. The month of March is the favorite time for municipal rattlesnake hunts in numerous West Texas towns, and—festivals being what they are—these hunts have expanded over the years to include such things as Saturday night dances, Miss Snake Charmer pageants, handling and milking demonstrations, sacking contests, and snake roasts. Herpetophiles should mark their calendars to include the following events:

Jacksboro, Annual Rattlesnake Safari, first or second weekend in March (date not selected at press time). Demonstrations at the Armory Building, Lake Jacksboro; hunt “all over Jack County.” Prepared rattlesnake meat will be served to visitors. Registration fee for hunters.