As one third of the Texas barbecue trinity, smoked sausage has important stature in Texas. Central Texas has its beef sausages, East Texas has got hot links, and you’ll find plenty of smoked boudin along the Louisiana border. In Houston, they have it all as J.C. Reid and Michael Fulmer showed me in a guided tour last week through the south side of town. There are still plenty out there still left to try, but we got a good sampling of this multitude of meat in casings.

Killen’s in Pearland opened earlier this year, and has already garnered high praise from Houstonia magazine and the Houston Chronicle. Much love has been given to their smoked sausage, and rightly so. It’s house made with a Central Texas influence. There’s more pork than a Lockhart beef sausage, and more spice as well, but it’s a Texas sausage to be proud of. Try the jalapeño version for a tad more heat.

In the Third Ward, up in Houston proper, Ray’s BBQ Shack does their own version of homemade sausage. Also a beef and pork mix, these smoky links trade the German meat market flavor for that of a Gulf Coast crawfish boil. It’s a signature spice mix with a Cajun flair which helps make these juicy links hard to resist. Ray’s shows even more of its Southeast Texas identity with a homemade smoked boudin. Marrying a traditional Louisiana dish with a Texas smoking method, Ray’s might break some arbitrary “rules” of regional barbecue, but the results are too good to argue with. Owner Ray Busch says he adds more rice to the mixture than the richer Louisiana versions, which is fine by me because you can then treat it like another side item instead of the main course.

One big advantage that Houston has in the sausage department over other large Texas cities is B&W Meat Co. in the Heights. You can find thirty varieties of homemade sausage and boudin in their enormous meat case, and all that I’ve tried are good. Even if a barbecue joint doesn’t have the time to make their own, they can still offer a high quality local sausage by shopping at B&W. That’s where Greg Gatlin of Gatlin’s BBQ gets his deer sausage, and I’ve seen other local pitmasters in the checkout line with a cart full of B&W sausage. 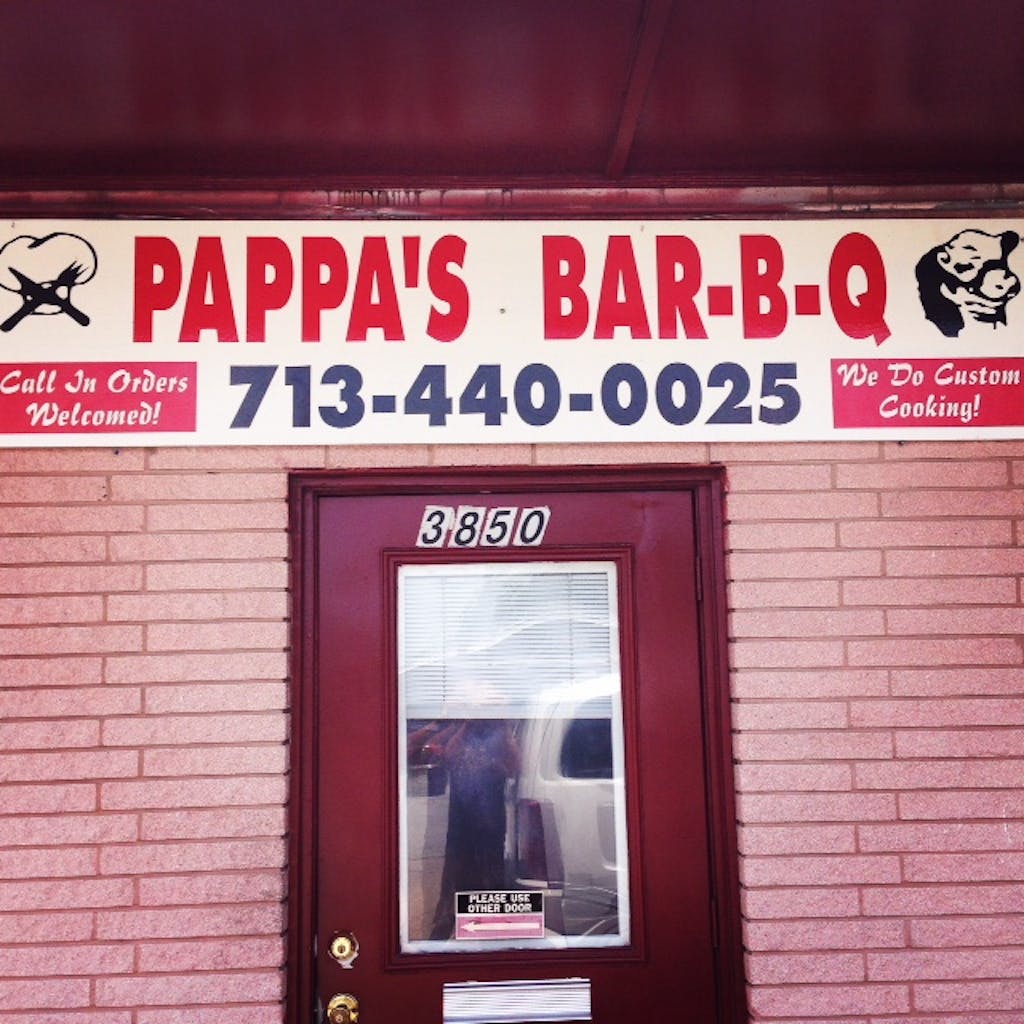 Houston was once famous for juicy beef links from the likes of Joe Burney and Harry Green. Many of those old recipes are either out of favor for their heavy fattiness, or out of the rotation entirely. But in the South Side neighborhood near 610 and 288 they still make spicy beef links at Pappa’s Bar-B-Q. There’s no connection to the Houston-based Pappas BBQ chain, but the few Yelp reviews of this largely unknown joint are meant for the other Pappas. On the menu is a rarity besides the beef link – veal brisket. The cut I tasted was incredibly bland, so I quickly moved onto the links. The beef casing was tough as expected, so I removed it. The beef filling was dense and a bit drier than I’d hoped. It had the characteristic garlic flavor, but was missing the zing of places like Patillo’s and Broussard’s in Beaumont or Leon’s in Galveston who make similar links.

It took less than a mile to find a better version of beef links. Wayne Lemons is responsible for the handmade links at Powell Bar-B-Q in Sunnyside. They are all beef with a beef casing, and are spiced with plenty of garlic and paprika. The fattiness was more to my liking. One bite of these juicy links and I was transported back to Beaumont, and that’s precisely where Wayne said this recipe, which belongs to Mr. Powell, originally came from. Thankfully, these traditions are staying alive on the south side.

Just a few miles from Powell Bar-B-Q is the building that once housed Green’s BBQ where Harry Green made his famous juicy links. Mr. Green passed away several years ago, but that recipe didn’t go with him. Besides being printed in Robb Walsh’s Legends of Texas Barbecue, the recipe is still made every now and then by Wayne Lemons who once worked for Green. He doesn’t make them on a regular basis, but Powell Bar-B-Q is worth a visit for any variety of links that Lemons is cooking in the old brick smoker. It’s just one of the many sausage varieties you’ll enjoy on a Houston barbecue crawl.