Every other week, Daniel Vaughn compiles the latest in barbecue news and unearths a few surprises. Here’s the roundup for August 3–16.

I spy a couple of BBQ joints on this list:

The 40 most important restaurants of the past 40 years https://t.co/VOyMLgZRdw pic.twitter.com/DWv7rf9o5F

“Other than the day I married my wife and the day my son was born, it was the greatest day of my life.” – Wayne Baker, of Baker Boys BBQ in Gonzales, reflecting on the day they became a Texas Monthly Top 50 BBQ joint.

The Smoking Ho has been spending a lot of time at LeRoy and Lewis Barbecue in Austin these days and offered this updated look at their barbecue.

Jambo’s Original BBQ Shack in Rendon has reopened under new ownership. No changes are expected at the other two Jambo’s locations in Arlington.

Hutchins BBQ has been invited to New York to cook at the James Beard house next month. Before they go, they’re offering a preview dinner in Frisco on August 30 of just what they plan to serve.

I'm pleased to tell this story: #BBQ joint @SmokeyJohnsBBQ will reopen after a fire, and at that same Mockingbird Lane address. https://t.co/nsjEGtrZUk

MySA was impressed with the heft and the “cargo” held within the stuffed potato at the Bad to the Bone BBQ food truck.

It was a challenge for Mike Sutter to find a full barbecue menu at Crossroads BBQ in San Antonio, but he enjoyed the pulled pork and the barbecue nachos.

Brooks’ Place in Houston is back open after some lingering electrical issues caused them to shut down for a few days.

Mighty Quinn’s Barbecue, founded in New York in 2013, currently has 15 locations. The company now has plans to sell franchises and open 60 stores across the country in the next 5 years.

Ducks Eatery in New York has created a new dish called the watermelon ham. It’s a cured and smoked whole watermelon that’s sliced like a steak.

This fella didn’t know he was gonna start a bread war:

BBQ restaurant: Here is your platter of hand trimmed, slowly smoked meat with a sauce that took us 24 hours to make based off a secret family recipe and it is served with some untoasted slices of shitty off-brand white bread we got at the 99 cent store

If you want to get your hands on the only green barbecue sauce out there, Charleston’s Lewis Barbecue is now selling bottles online.

They’re offering all-you-can-eat barbecue in New York at Hill Country for $32 per person on Mondays.

A blast from the past when Julia Child got BBQ from Sonny Bryan’s: 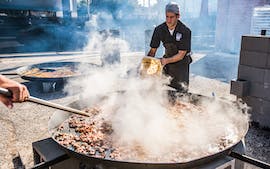 BBQ News Roundup: A Job Posting for Chief Grilling Officer, Brisket Pizza, and the Effects of a Barbecue Only Diet 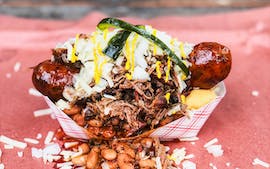 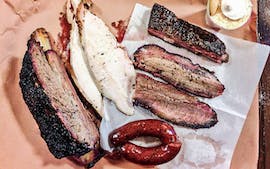 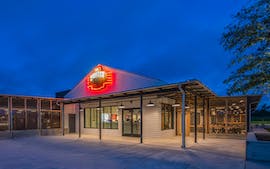 BBQ News Roundup: Saving Sam’s, Catching a Prime Suspect, and the Opening of the Switch