Smoking a brisket is no easy task, and you’ll need a crowd to finish the six or so pounds of smoked meat. Short ribs, specifically beef plate short ribs, make for a much easier hunk of beef to tackle because they’re consistent. Their thickness, marbling, and the direction of their grain are the same all the way through. With more intramuscular fat than a ribeye, they’re almost impossible to dry out. Basically, mastering smoked brisket is barbecue calculus and beef ribs are nothing more than long division.

The December issue of Texas Monthly teaches us how to cook like a Texan, including a recipe for smoked beef short ribs. In the issue, the 9+ hour smoking method of Ronnie Killen at Killen’s Barbecue was detailed, but there was also a short note about cooking the beef ribs hot and fast. I added more detail about the process in my draft of the article, but the print editors cut it to save room for foods that aren’t barbecue. Shame.

The idea was to find a fast and easy method for great beef short ribs. I wanted to see if I could use a basic backyard grill for smoking a big cut like beef ribs, so I bought a few racks and lit a few fires. 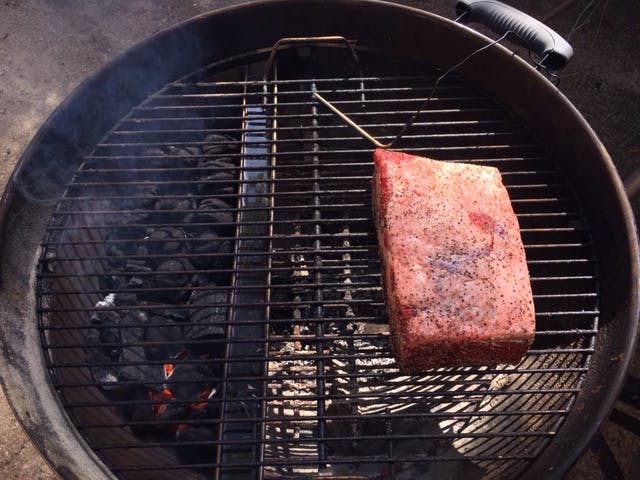 I have plenty of cookers to choose from in my backyard, but I know folks are more likely to have a basic charcoal grill than an offset smoker. I’ve never bothered using my Weber Kettle for smoking meat, but it worked well for beef ribs. One reason being that it’s a cut which can take high heat, like in the 300-350 degree range, because it’ll never run out of juice like a brisket flat, no matter how hard you hit it with heat.

I set up the grill with a Slow ‘n Sear to make it easier to hold the charcoal to one side, but additional equipment isn’t necessary. If the charcoal was lit all at once, the grill would get far too hot, so you’ve got to light just a few briquettes on one edge of your pile of fuel to create a slow burn (see bottom left of photo above). This can be done with newspaper and matches, but a charcoal starter pad works better. For the lump charcoal purists, sorry. This method works better with briquettes.

Adjust the lower damper and upper exhaust to get the grill temperature to 300 degrees. This may take some time to settle the temperature fluctuations, but a steady 300-325 is optimal. Place the rack of short ribs on the grill, seasoned however you like them, opposite the fire, and close the lid. Monitor the temperature (I placed the lid vent directly over the ribs and dropped a probe thermometer through the hole), and adjust the dampers as necessary. Make only small adjustments to the dampers, but the fire should stay steady. A large chimney worth of charcoal should be plenty to finish a full rack. 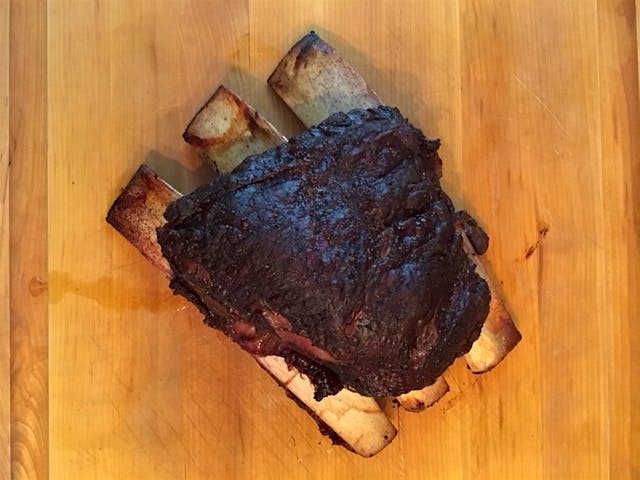 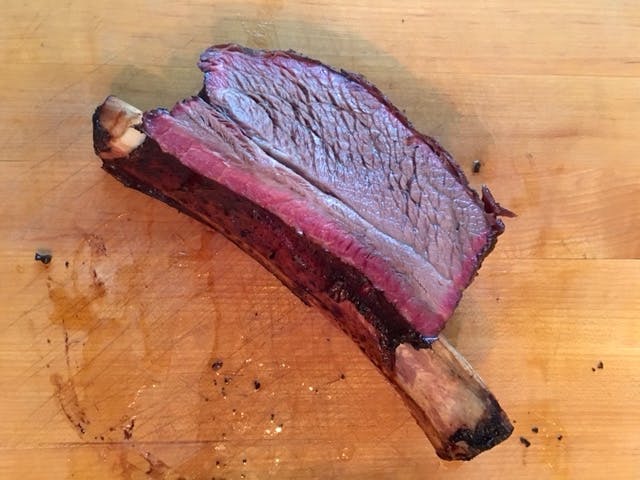 In about four hours, the ribs will reach an internal temperature of 200 degrees. That’s a popular target for low-and-slow cooking, and will make for great short ribs, but you’ll need a knife. They won’t fall apart easily like at your favorite barbecue joint. Wesley Jurena, the fast-cooking owner/pitmaster at Pappa Charlie’s Barbeque, offered a tip on cooking hot-and-fast. “The higher the heat, the higher the internal,” he tweeted to me when I posted photos of the first couple attempts. When I pulled the next rack of ribs at 210 internal, they were even better, and it took just a hair over four hours. In half the time as most barbecue joints, and with a basic charcoal grill, I had beef short ribs I’d be proud to serve to any critic.