A large pickup truck whizzed along Lamar St. (State Highway 70) in Sweetwater while we sat in the parking lot of Big Boy’s enjoying some smoked meats while my newborn son ate in the backseat. The scene was only worth a glance until a State Highway patrolman followed with lights and sirens blaring . . . then another, and another, and another, until five police cars had passed, one of which narrowly missed a semi truck as it passed under the I-20 overpass. We wouldn’t know until the next day that the driver had stolen the vehicle and was shot dead just a few blocks north of where we had sat.

Moments before, things were much more calm inside Big Boy’s. It was getting near closing time and the place was pretty empty on a Saturday night. I chatted with owner and pitmaster Gaylan Marth while my order was being put together, and he made no qualms about sharing his cooking method. “It’s not smoked,” he said. In the way of Cooper’s, Hard 8, and Schoepf’s, this meat had been cooked directly over mesquite coals. Gaylan uses whole briskets that are around eight or nine pounds so that they cook a little quicker under his 275 degree fire. On this day I was seeking some of that brisket along with the ribs and beans. Dessert wasn’t in my plans, but they generously offered to give me a large serving of banana pudding gratis after they returned with a huge pan of it from a catering gig. 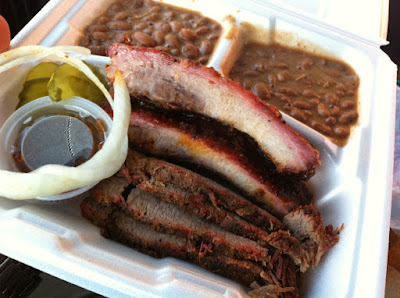 St. Louis-cut ribs had more than a subtle glaze. This one was pretty thick with black pepper and possibly honey. There wasn’t really a smoky flavor to cover up given the cooking method, but it would have been duly covered. While providing and enjoyable flavor, the glaze was certainly the dominant flavor on these perfectly cooked ribs. Brisket was sliced from the flat end and was very tender. I’m used to seeing brisket sliced very thick at other direct-heat joints because of the tenderness, but these were sliced thin and fell apart completely after handling. Even if only small pieces could reach my mouth, the flavor was excellent. The meat really took on the flavor of those mesquite coals unlike I’ve seen before. The sweet black pepper rub was a good complement. I just hope the next visit will be a bit less dramatic.