I was in the neighborhood, which doesn’t happen often when speaking of Lavon, Texas, and I was hoping for the best since my visit to the much heralded Big Daddy’s just two years ago left much to be desired. Both fatty and lean brisket are listed on the menu, so I felt confident that an order of the fatty stuff would bring me some BBQ joy on this day. Samples of their weak commercial sausage and what I think were Smokey Denmark’s hot links convinced me to venture away from the tube steaks, so I rounded out the three meat plate with pulled pork and ribs. 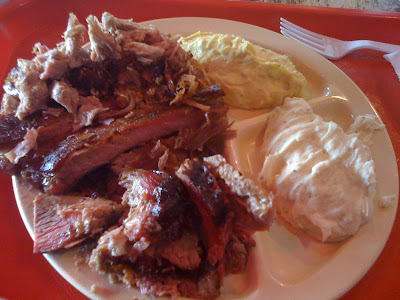 Two potato salads are available. Both are mashed, but I found a mixture of the two worked best since the mustard version was too acidic and full of pickle flavor while the mayo version just tasted like mashed potatoes with too much mayo. A mish-mash of dry and moist meat, neither with much smokiness, was thrown together in my pile of pulled pork. The meat was too salty and contained too much unrendered fat. Ribs were the best item. They also needed a bit more smoke, but the meat was moist, tender and provided just enough give as it came off the bone. Brisket was just plain bad. The fatty slices were very much undercooked and contained so much unrendered that the slices were chewy. The meat didn’t stay in my mouth long enough to pick up much of anything else. Luckily there was a good slice of buttered Texas toast. I piled some pork, sauce, pickles, and onions on it for a filling end to the meal. It’s too bad it took so much work to make it good.