Two culinary school graduates joined forces in an East Texas barbecue joint, and have created a barbecue synthesis like none other. Every Wednesday, and only on Wednesday (for now), Bodacious Bar-B-Que in Longview smokes a batch of burnt end boudin. A marriage between Cajun cuisine and Texas barbecue has never tasted so good.

Jordan Jackson and Scott Turner met at Le Cordon Bleu in Austin, then went their separate ways. Jackson chose a barbecue path that took him to Stanley’s in Tyler before he reopened the original Bodacious Bar-B-Que location with his father-in-law, Roland Lindsey, in June of 2015. Turner dove into fine dining at restaurants in Dallas, Savannah, and Jackson Hole before coming back to Texas where he reunited with Jackson just six months after the Bodacious re-opening. They’ve been humming along serving excellent brisket and ribs ever since, but unlike most joints in East Texas, they also make their own sausage.

After finishing another batch of pork and beef sausage, Jackson got the itch to make boudin last month. Now, this being East Texas, there’s plenty of boudin to be had, even at barbecue joints. Longview is just fifty miles from the Louisiana border, and Carter’s Bar-B-Que just up the street from Bodacious is famous for the Carter’s Special which includes smoked boudin (spelled boudain on their menu). Smoked boudin in Texas isn’t uncommon, but homemade boudin is, especially anywhere north of Houston. But Jackson didn’t want to recreate a Louisiana boudin. “We wanted to make it our own, and make it barbecue,” he told me. That meant ditching the traditional pork filling and adding beef. Besides, they had plenty of extra beef fat laying around. 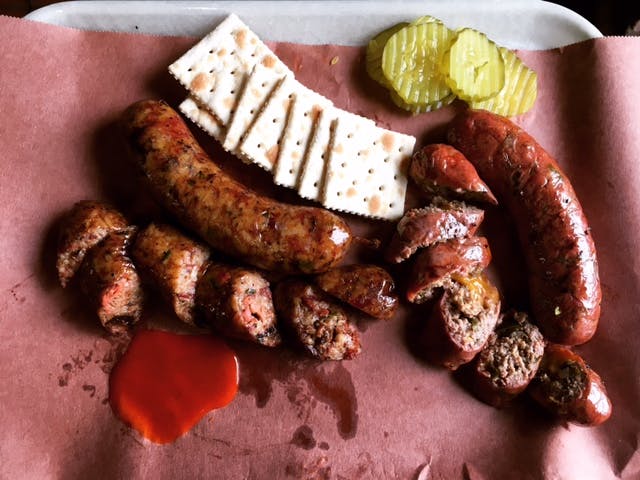 Boudin, for the uninitiated, is a sausage filled with a mixture of meat (usually pork), rice, and seasonings. The filling is cooked before being stuffed into casings, so it really just needs to be warmed up to eat. That’s done in a steamer or a smoker. In their first batch at Bodacious, they used smoked beef cheeks for the filling, and it was an unexpected hit. “Normally we’d run some test batches,” Turner said, but they went all-in with a 25 lb batch (about 75 links) and put it on the menu. It sold out within the first hour, and customers have been asking for it since. For the next batch they switched to brisket, and Turner suggested the addition of burnt ends as well. Thus, burnt end boudin was born. 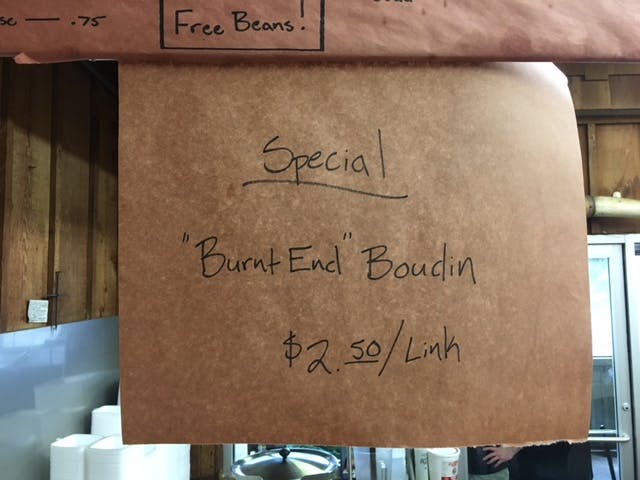 There’s more to this boudin than just mixing some chopped brisket and rice. First, they break up a fully smoked 44 Farms brisket into a pan with onions, garlic, and Coke, then braise it. The meat is ground and mixed with the rice and the brisket-flavored liquid along with green onions and cajun spices. Whole chunks of brisket burnt ends are then folded into the mixture before it all gets stuffed into casings and smoked. Mind you, they don’t have an oven or a stovetop on site, so every bit of cooking is done on the pit, even the rice. 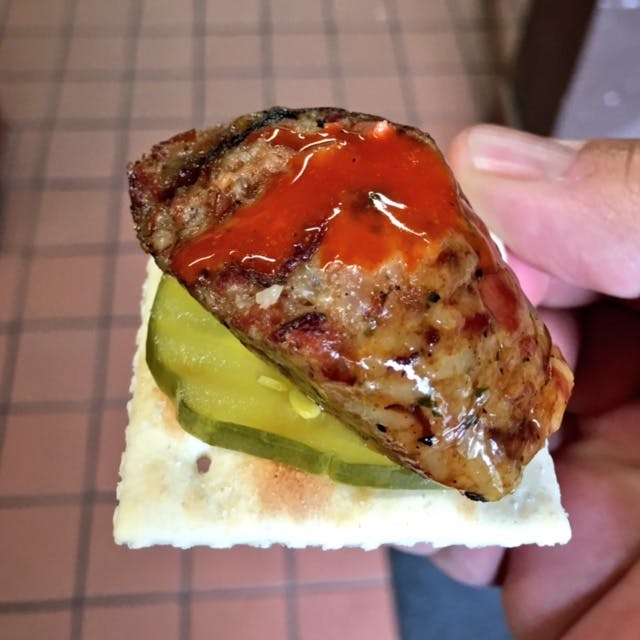 The result is the most exciting new item on a Texas barbecue menu I’ve seen. There are different levels of smokiness in each bite. The beefy, barbecue rice envelops large chunks of tender, smoky brisket that bring along a spike of black pepper and some welcome textural variation. The casing captures the final wisps of smoke as it becomes taught and bronze in the pit. It’s the most Texified version of boudin I’ve tried, and one of the best brisket sausages I can remember.

Instead of being tempted to look toward Central Texas for inspiration (like everyone else in the country seems to be doing), Jackson and Turner have created their own unique barbecue item that tells a story about their place in their own barbecue region. This is not just another beef short rib. It’s a mix of traditions that I’ve never seen but sounds obvious, especially once you’ve eaten it. As my dining guest Meathead Goldwyn put it, “This is barbecue that’s crossing borders.”