In Texas, you can find barbecue smoking in unlikely places. Circling a high-rise apartment building in downtown Houston, I spotted a sign for Cherry Block inside the six-month-old Bravery Chef Hall. The weekend prior at Foodways Texas’s Camp Brisket, the restaurant’s chef, Jess DeSham Timmons, had assured me the Cherry Block staff was smoking meats for several items on the menu. Walking into the food hall, I saw the restaurant’s tiny open kitchen just behind the counter and thought they must be smoking off site. But then the door of a compact steel smoker opened in the corner of the kitchen, oak smoke perfumed the air, and one of the cooks retrieved a tray of smoked burger patties.

The cook wasn’t just any old member of the kitchen staff. It was Jason Tedford, who managed the pits at Louie Mueller Barbecue in Taylor for several years. He came to Houston in 2018 to open a restaurant inside Saint Arnold Brewing Company. I was surprised to see him at Cherry Block, but not surprised to see him running a smoker. The black steel box was designed and built by Cherry Block’s owner, Felix Florez. So was the wood-fired grill next to it. Together they make for one scorchingly hot kitchen, as the trash can with one side nearly melted away can attest.

A huge stockpot was simmering, and Tedford said it was the beginnings of their next batch of gumbo. The stock’s foundation is smoked pork shanks from Black Hill Ranch, where Florez raises a variety of heritage breed hogs. Ham hocks are smoked for the gumbo as well, then simmered in the stock until they’re pull-apart tender. The roux begins with pork lard and flour. Slices of smoked andouille sausage, made in house, also find their way into the gumbo. Despite the allure of the smoked burgers, I had to try the gumbo.

There’s not so much a line between a soup and a stew as there is a patch of neutral ground separating them. This gumbo resides on that neutral ground. A spoonful coats the mouth and brings the richness of liquid marrow. It’s so substantial that the sausage and chunks of pork—tender but not shredded—are suspended above the surface of the stock. Spiciness from a trio of cayenne, white pepper, and black pepper lingers rather than punishes, and even mellows with a bite of the deviled potato salad. That’s right: they replaced rice with a scoop of eggy potato salad on top. I didn’t miss the rice.

Cherry Block isn’t a barbecue joint, but with its pedigree, it’s no surprise that they excel at smoking meat. Florez is also a partner at Blood Bros. BBQ in Houston, Timmons once managed Caboose BBQ in Alvin, and of course there’s Tedford’s experience at Louie Mueller. Tedford said they haven’t yet asked him to smoke beef ribs, but I’ll have to return to try the smoked burger when I haven’t already filled up on some of the heartiest, porkiest, smoke-kissed gumbo this side of the Sabine River. 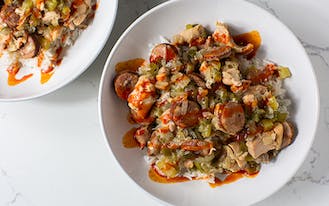