Out in the Piney Woods of East Texas, a legendary barbecue joint run by the New Zion Missionary Baptist Church has been dishing out classic East Texas-style barbecue since the seventies. Some refer to it as New Zion, after the church it supports next door. Tthers call it “The Church of the Holy Smoke.” But on the business cards that pastor Clinton Edison passes out, it reads “CHURCH BBQ; America’s Food.”

New Zion’s Church BBQ has a creation story for the books. And just like another epic genesis, the exact beginning is a little hazy. New Zion pastor and Church BBQ restaurant manager, Clinton “Clint” Edison, told they’ve been going at it for 48 years, but most peg its opening around 1979, about a decade short of Pastor Edison’s estimate. Even founder Annie Mae Ward wasn’t sure, as was made clear during a 2000 appearance on Texas Country Reporter.

No matter the timeline, it began when someone offered to buy the barbecue Ward was cooking for her husband and a crew who were painting the church. It didn’t take long to sell it all, so she kept cooking, and the people kept buying. Eventually a permanent building was erected to house the restaurant next to the church.

When Ward grew too old to run the restaurant, May Archie and her husband, Horace, took over in 2003 until May’s sudden passing five years later. After a brief closure, Pastor Edison reopened it under his watch. Since then a few things have changed, like the Ole Hickory rotisserie smoker out front. As for the recipes, Edison insists “Everything we do here is the same as they were doing it when Sister Ward and Deacon Ward first opened this place up. We haven’t changed a thing.” The story is what made them famous, but the recipes are what brought people back.

Except they almost didn’t bring me back. My only previous visit to the Church of the Holy Smoke was six years ago. I’d set my sights on it after reading a piece Texas Monthly food editor, Pat Sharpe, wrote in 2009 for Saveur. She called it “one of the most renowned yet improbable members of the Texas barbecue hall of fame.” For a place with such a huge reputation, I had left disappointed, and wrote Church BBQ off as a feel-good story in need of good barbecue.

Another story, this one by J.C. Reid for the Houston Chronicle, convinced me to give it another try. I knew my attitude during my earlier visit–that all barbecue should seek to be Central Texas-style sliced brisket–was a naive one. My outlook has matured in the past five years, and I now understood that this was East Texas where they love their barbecue sauce and see no need for butcher paper. I wondered what a fresh perspective would do to my impression of this famous barbecue joint. 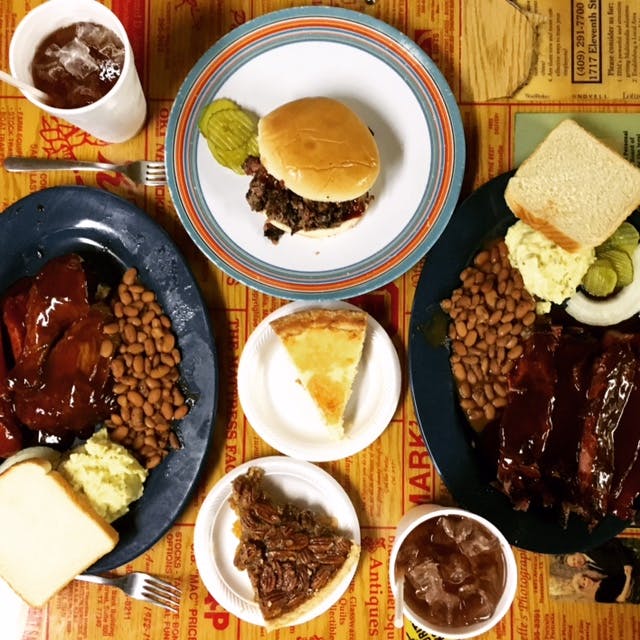 After six years, the building didn’t look any more stable. Pastor Edison, who was working the register during my latest visit, joked that “We just keep it propped up and patched up.” I shared most of the menu with my family. The deep plates were required to contain the generous servings of meat and barbecue sauce. My six-year-old daughter sought a napkin after the first bite, and I told her to wait until the end. She lit up. “I get it,” she declared. “Barbecue is about getting dirty!” My son agreed, licking the sauce from his fingers. He loved the giant spare ribs for their tenderness. After smoking, the ribs take a long simmer in covered electric cookers. They’re too mushy for me, but the homemade sauce is undeniably good. It’s a deep red with plenty of vinegar and an understated sweetness. It’s engineered to work with the brisket that would be a bit dry on its own, but paired together they warrant repeat forkfuls. Don’t outsmart yourself here by asking for the sauce on the side. Here, it’s as integral to the flavor as the smoke. 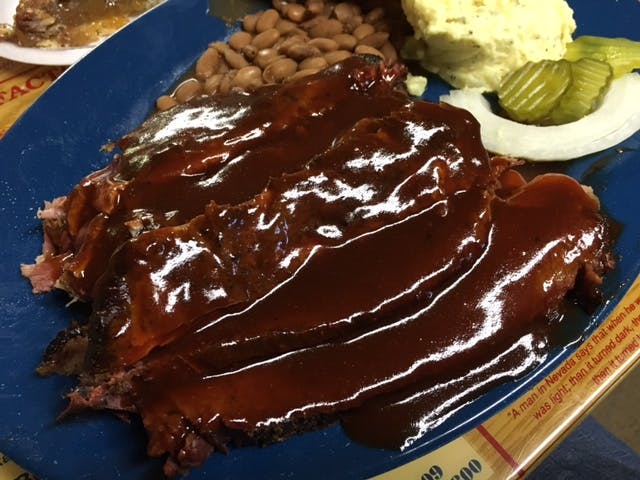 Dark meat chicken was juicy and tender, but needed a salt shaker, and the smoked sausage was serviceable. A mashed potato salad with mayo, mustard, and pickles was satisfying and homemade. So are the basic pinto beans that get a dash of sauce and maybe some chili powder too. Both sides are role players much like the bread and pickles, but the desserts are star-worthy. A slice of pecan was heavy on the nuts, but I still preferred the creamy buttermilk. 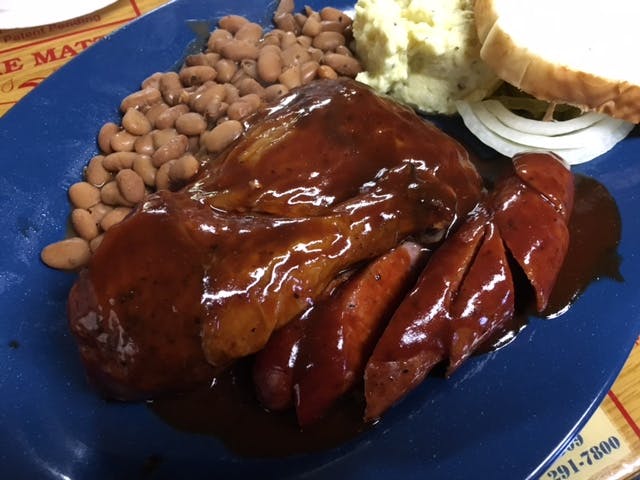 Finishing up the pie, I didn’t realize I’d left the best for last. The chopped brisket sandwich looked plain enough on a cheap white bun, but it was one of the best I’ve had a while. Smoky, fatty nubs of bark and beef were collected in a semi-cohesive mass. After seeing the drenched platters, the restrained level of sauce was surprising but welcome. I took a few bites and set it down with a smile. My daughter then snuck over and stole a couple bites of her own. We immediately agreed on our favorite menu item.

The slices of brisket I had gotten were all lean, so I asked Edison if the secret to the chopped brisket was that he used only the fatty point. “You just don’t want to give all fat, so you kinda mix it up,” he told me. I think they’ve found the perfect ratio. 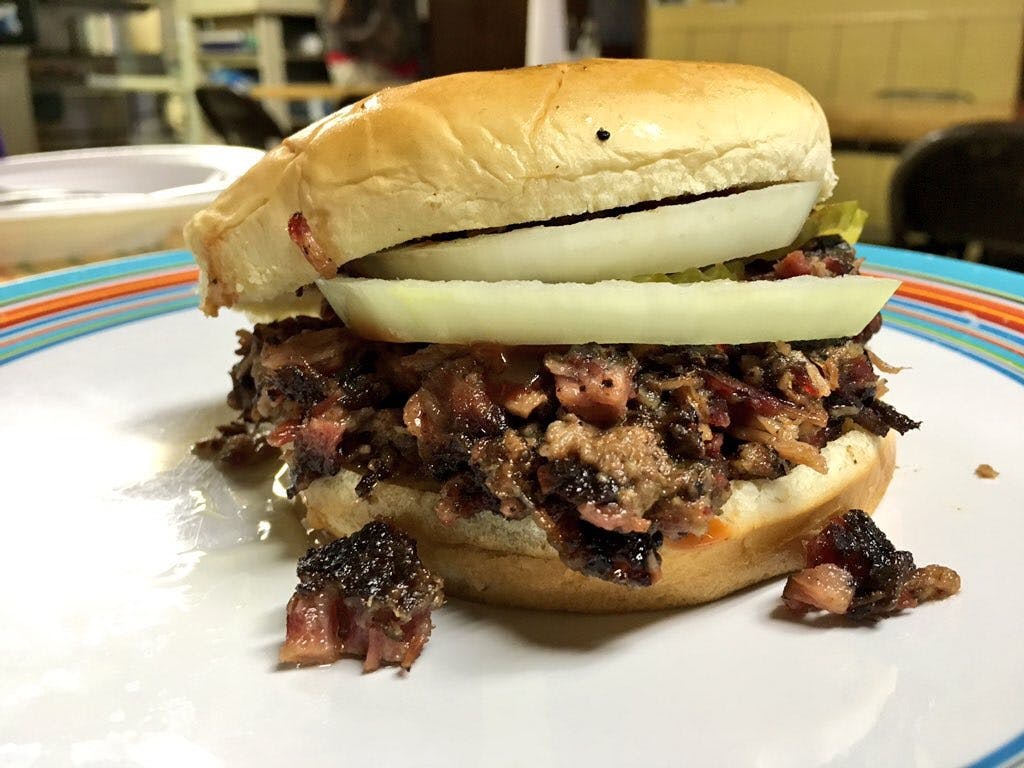 As I left, I was searching for some greater connection between barbecue and spirituality. I asked an unobliging Pastor Edison if anything about his preaching informed his barbecue cooking or vice versa. “No. Not at all,” was his simple reply. Maybe he could offer some tidbits about learning to become a pitmaster? “It just kinda comes to you.” I’d have to settle for a renewed appreciation of East Texas barbecue, and bearing witness to my children’s discovery that barbecue and getting dirty go hand-in-hand. That’s a good enough sermon for me.