Good barbecue in West Texas is about as common as an oak tree west of the Pecos River. Consequently, it was a revelation when we found Pody’s BBQ in Pecos a couple years back. When I first visited Pody’s back in 2012 it was brand new. A search around Fort Davis, Marfa, and Alpine during the same trip didn’t turn up even a single barbecue joint, so it was with excitement that I received a hot tip on a weekend-only joint further west than any other good barbecue in the state (sorry El Paso).

Come & Take It BBQ isn’t really much of a joint. Owners Scott and Jenny Turner set up a pit outside the Mountain Trails Lodge on the southeast side of town. A few tables are set up under a pavilion, and a server takes your order there. It’s a set up whose level of comfort changes significantly with the seasons, which is why they only plan to operate for a few more weeks this year before coming back bigger and better in the spring (their Facebook page is kept up to date with any changes in operating hours).

You’ll know when the barbecue is ready when the Come & Take It flag is flying at the entrance to the Lodge. That smoky scent may waft across the highway, too. Brian Bourbon mans the pit, but only on Fridays and Saturdays. There just isn’t enough demand in the area to stay open any longer.

The sun was shining at 5:00pm when I arrived. The Back Porch Players musical duo played a few old time tunes, alternating instruments with each song. One played the flute during their rendition of the Fort Davis Waltz. Service was quick, and my combo plate of all three meats (ribs aren’t available) came out quickly. 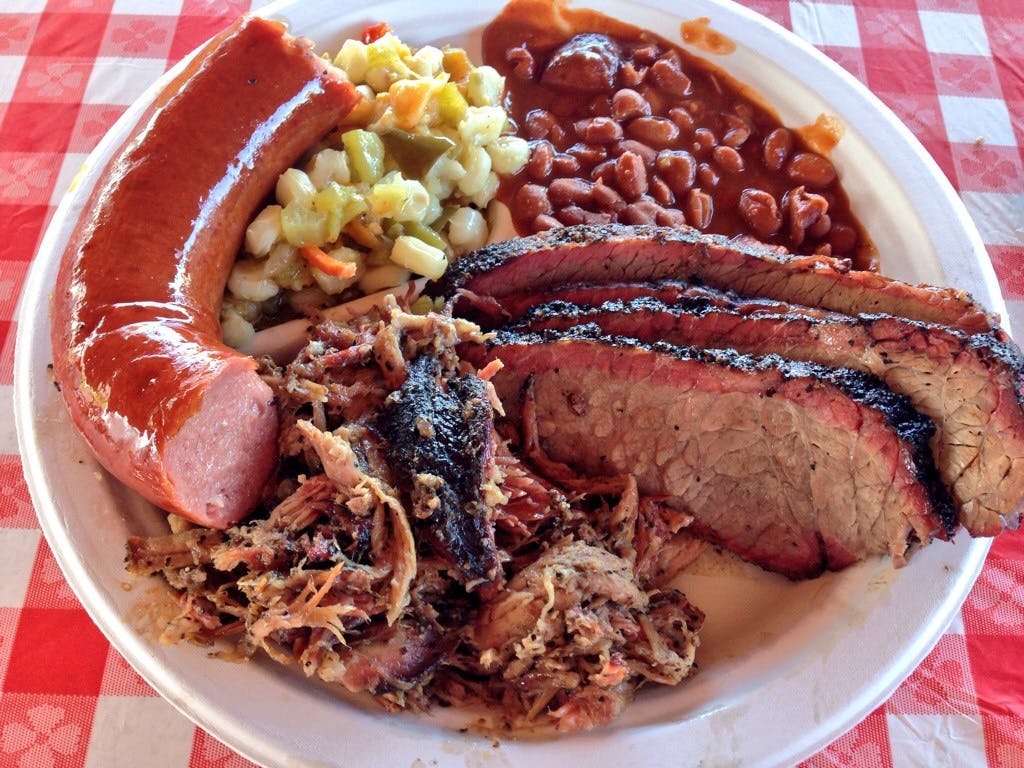 On sight, I knew the sausage would be of little consequence. It was a cheap version that you’d find in the bulk bin to the supermarket. The pitmaster even offered an unsolicited apology for the sausage during a chat after the meal. They plan to work with the meat lab at nearby Sul Ross State University to perfect a sausage recipe for when they reopen next year. For now the greasy link fits on this plate about as a well as a slice of Spam on a tasting platter of Italian prosciutto. If it hasn’t sunk in yet, skip it.

A scoop of meaty ranch beans was rich with the flavor of chiles, while a side described as cheesy baked pozole was just unpleasantly crunchy hominy with some bits of green chiles and unmelted cheese. It’s best to stick with the simple mayo slaw, where the crunch is intentional. Quickly making up for any shortcomings was juicy pork pulled into smoky tassels with lots of black bits of bark mixed in. The seasoning was generous, and so was the portion. It would have been the star of the plate if not for the brisket. 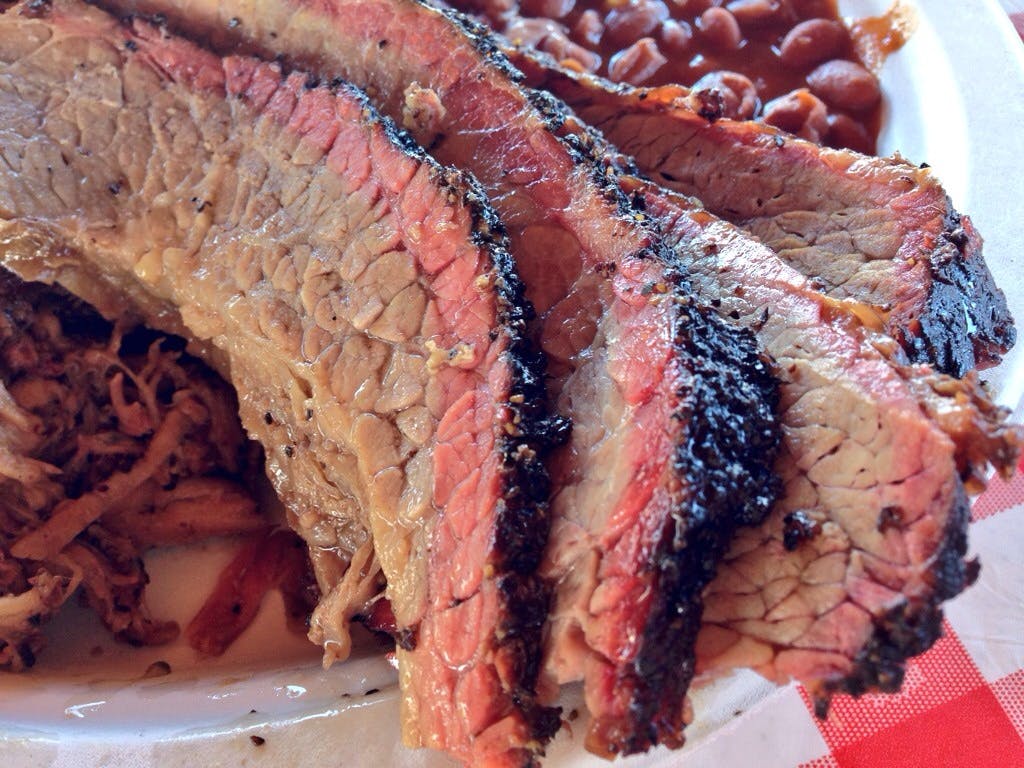 Great brisket is worth celebrating anywhere in Texas, but seeing the black crust, and deep smoke rings on these slices out in the Big Bend region got me giddy. Two slices each of lean and fatty lounged temptingly on the plate, caressing one another. The meat was smoky with plenty of salt and black pepper. The slices were juicy, and almost tender enough to find faultless. An hour of resting the meat after the cook would likely push it into a loftier category. 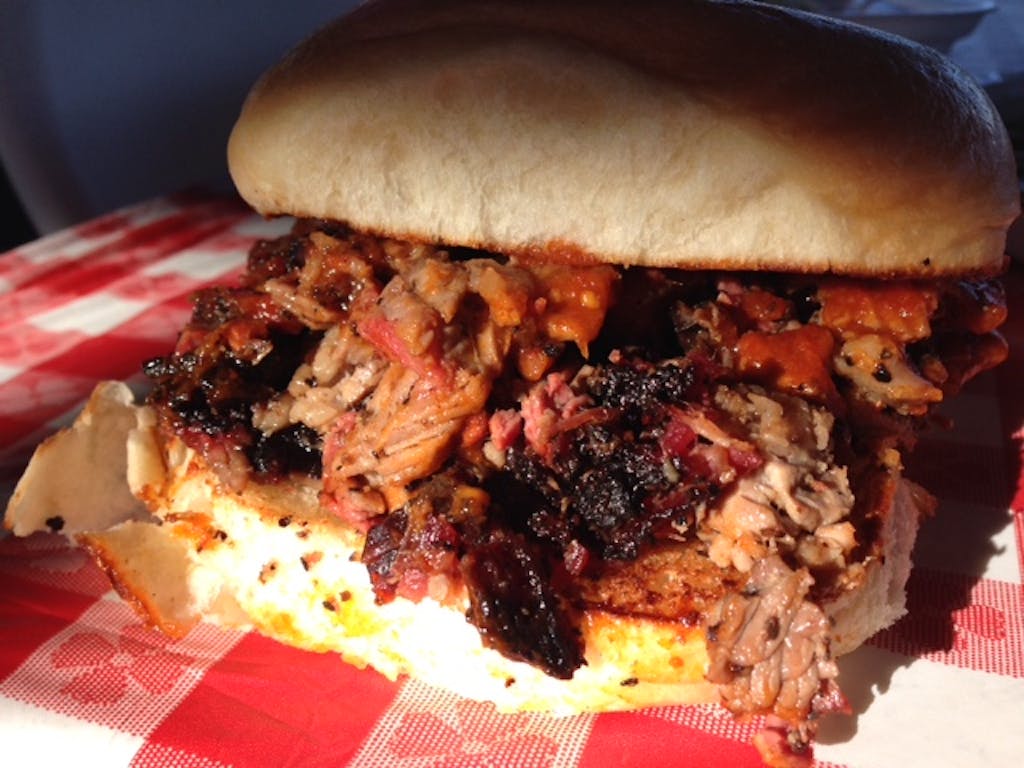 The flavors of the chopped beef were pleasantly familiar. All those crusty bits might be overwhelming if kissed with mesquite smoke, but the owners have found a rare supply of red oak in the area. The juicy meat was topped with a tomato-based sauce that wasn’t too sweet, and a good quality honey-flavored bun sealed the deal.

I almost skipped dessert, but thankfully I ordered the peach cobbler. It was like a layer of cobbler, topped by a thin coating of spice cake. It was stunningly good given its humble appearance. Come for the brisket, but stay for the cobbler. You also need to get here soon. I caught them late in the season, and their last weekend this year will be just after Halloween. If you can’t get to Fort Davis before then, you’ll have to wait until next spring for the best brisket west of Pecos.