A donut shop sits next to Brian and Julie Wright’s barbecue-centric taco joint along Texas Highway 154, halfway between Marshall and Gilmer in East Texas. The only other hot food available in the tiny community of Harleton is in a gas station.

The Wrights’ restaurant, Wright on Taco, exists thanks to a pit left behind by a previous owner. Brian had worked at his family’s machine shop (they didn’t build smokers) prior to opening the joint in his hometown three years ago. He hadn’t cooked much barbecue before that. Julie was then a nurse who didn’t yet have a salsa recipe and had never attempted to make a tortilla from scratch—that changed a year ago when the couple decided to ditch the store-bought variety. The timing of that switch may have had something to do with the matching taco tattoos the couple got during an evening out in late 2018, but whatever the case, Julie began to feel that if everything else was made in-house, why not the tortillas?

“There were a lot of failed attempts,” Julie said with a laugh about her earliest efforts. “Humidity and different weather … Sometimes it just doesn’t come together,” even today, she admits. The standard tortilla for the dozen or so taco varieties is flour. When Brian smokes beef cheeks for barbacoa, they’ll use the excess beef fat for corn tortillas. Most of the standard taco fillings are grilled or fried, but there’s a trio of smoked brisket tacos available every day, all served on those fresh flour tortillas.

The Texican taco features a combination you might find on a brisket sandwich at a barbecue joint. Chopped brisket is topped with barbecue sauce, pickled jalapeños, and slaw. The Dude is loaded with lettuce, pico de gallo, cheddar, avocado, salsa verde, and sour cream. It’s hard to choose, but I think I liked the Leftover best. Crisp bacon and creamy queso covered the brisket filling. It was comforting and a little trashy at the same time. All the tacos cost $4.25, and each comes with about one-third pound of brisket that’s juicy and smoky. I wished there were an option for sliced brisket in the tacos, but they do offer a brisket plate if that’s what you’d prefer.

The brisket is their staple. Brian smokes about twenty briskets per week and hopes to add more barbecue to the menu, but the Wrights don’t want to overextend themselves as the business grows slowly. On occasion, Brian smokes sausage, pork shoulders, and bologna. Brisket-stuffed jalapeños are a weekend special, and ribs find their way onto the menu more often these days. The couple is planning to get their various proteins on a daily schedule of specials, but first want to learn the community’s preferences. “We haven’t gone too wild,” Julie said. “The pork belly was a tough one to explain.”

Besides the tacos and barbecue, the restaurant serves as the town’s coffee shop too. Lattes and iced blended coffee drinks are made with beans roasted by Porch Culture Coffee Roasters in Tyler, and Wright on Taco might have the only affogato I’ve seen sharing a menu with barbecue. A scoop of ice cream topped with an espresso shot, it’s a great afternoon boost after a filling taco lunch.

The Wrights are proud of what they’ve built and where they’ve done it, even as they understand that Wright on Taco isn’t exactly easy to visit. Julie, who hails from Gilmer, describes the restaurant as located between Longview and Marshall, “if you go the scenic route.” She admitted that “it’s tempting to move to the bigger city where you have more people, but then you kinda lose sight of why we wanted to put down roots here.” The Wright children attend school across the street from the restaurant. Julie also recalled how the community came by unprompted when the restaurant’s dining room was getting an upgrade. “We were putting together these tables the other day, and customers came in to help,” she said. The Wrights may need to teach Harleton about smoked pork belly, but the townsfolk already know about being good neighbors. 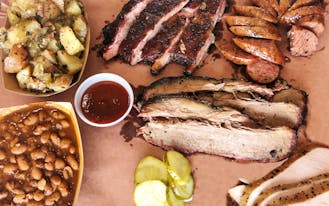