Skylight Inn cooks whole hogs over wood coals in Ayden, North Carolina just like they did when they first opened in 1947. This past weekend I embedded myself with Samuel Jones, the third generation of the Skylight Inn family, at BBQ on the Neuse. The event was centered around a whole hog cooking competition pitting eighty-four teams against one another. Their steel cookers, propane tanks, and cherry-red hogs were on display across the festival grounds, but the main attraction was a pig in the ground.

Whole hogs cooked with wood are the signature barbecue style of Eastern North Carolina, but those that still practice it are a dying breed. We’ve seen a resurgence of respect for cooking without gas in Texas, and new joints with all-wood principles seem to be opening weekly. It’s different in North Carolina where most new barbecue restaurants use gas instead of wood, and some of the old ones are making the switch. There’s even a movement to recognize the joints still using wood called True Cue. For those in Texas uninitiated to a gas-fired whole hog “pit,” they have little in common with our Texas gassers that still use wood to provide smoke and flavor. These gas cookers are just larger versions of your gas ovens at home – a woodpile is unnecessary.

At BBQ on the Neuse, Skylight Inn wasn’t part of the contest. Samuel Jones, Michael Letchworth, and the rest of the team where there more for a demonstration. Imagine Kreuz Market’s Roy Perez going colonial Williamsburg style with a makeshift brick pit in the middle of a Texas barbecue competition. It was like that. They were showing a crowd of mostly North Carolinins how their grandaddies used to cook barbecue (and how Skylight Inn still does.) Spectators gazed at the smoking pit when they walked by. Many stopped for a version of barbecue small talk.

“How long has it been cooking?”

“When can I buy some barbecue?”

The answer to the last question was wickedly ironic. The only way to eat some of this 180 lb. wood-cooked hog was to buy a seat at the judge’s table for a barbecue sauce competition. This animal was cooked simply and purely overnight only to be used for a base protein on which to judge barbecue sauce. You might as well dice up a beef tenderloin for chili meat, but word got out about the pork being used for sauce competition and a long line quickly formed of those willing to pay $6 for the honor of judging. At the dicing table back by the pit, I had access to a few good nibbles and all the crispy pork skin I could stomach, but all I really wanted to do was drive the twenty miles north to Skylight Inn, so I did.

Long brick pits line the walls of two cookhouses out behind the restaurant’s iconic silver dome. Oak burns down to coals in enormous fireplaces before being shoveled into the pits on either side of the splayed hogs. They spend most of their time with the skin side up, but they get flipped toward the end of the process to crisp up the skin. It needs to be crunchy so they can chop it in with the meat. In whole hog cooking, the meat gets very little smoke flavor from the cooking process, but the skin readily captures it. It’s this marriage of tender pork and crispy skin that gives the barbecue at Skylight Inn its signature texture and smoky essence.

The menu isn’t large. The barbecue chicken (Thur-Sat only) was already gone for the day, but I was here for pork. A medium tray with slaw and cornbread was $7.00 and the generous sandwich with slaw was $4.50. I finished them both. While the tray full of pork was the purest way to enjoy the meat – simply seasoned with salt, pepper, hot sauce, and apple cider vinegar – it was the sandwich I enjoyed most. Call it sacrilege, but a crunchy mayo slaw pairs nicely with smoky, tender pork between a cheap white bun. A crunch here and there reminded me of the prized bits of bark in a good smoked pork shoulder from a Texas pit. The inside meat creates the heft, but it’s the surfaces that bring the flavor. 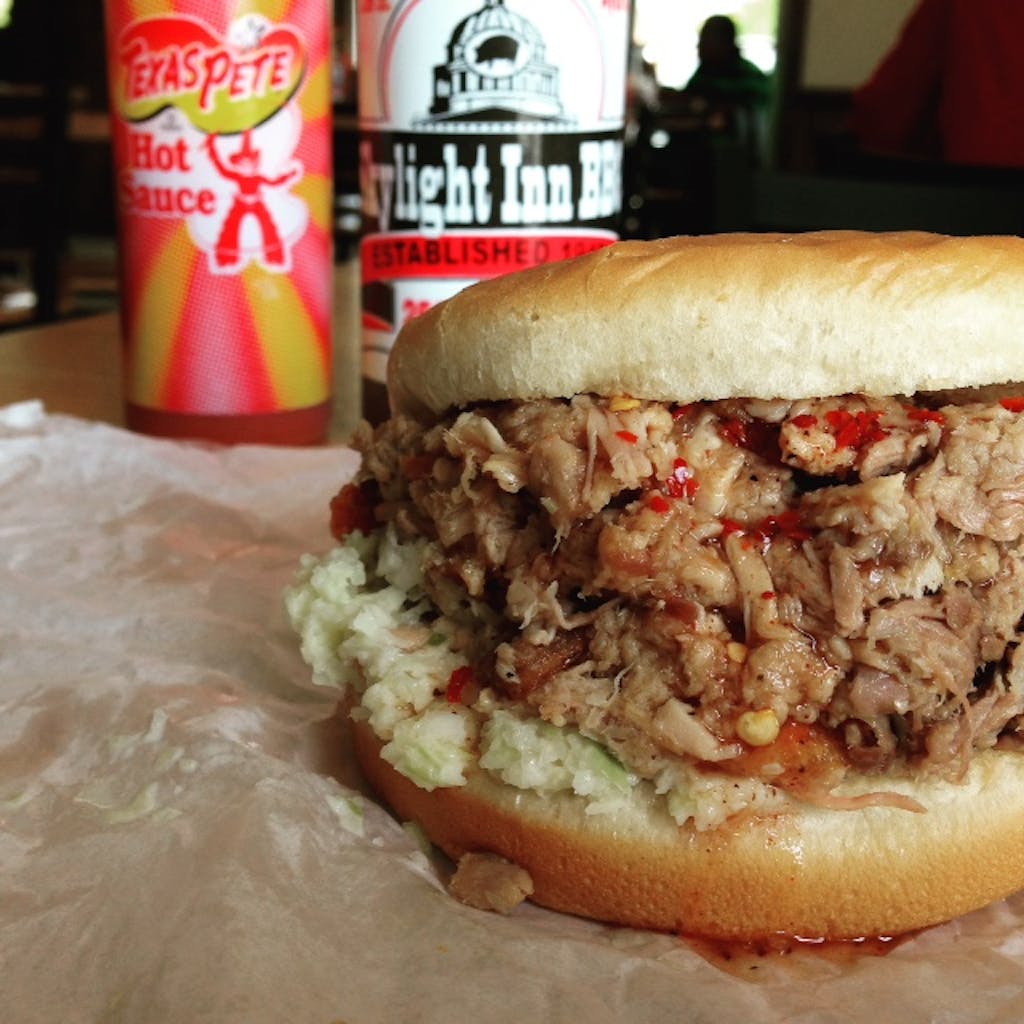 This isn’t my first meal at Skylight Inn. I tried it a couple years ago on a tour throughout the state focusing on wood-cooked barbecue. I liked it then, but I appreciated it more on this trip because I purposely included a few gas-cooked barbecue joints before and after for a better comparison. It wasn’t much of a contest. The others made a good pork sandwich, but at Skylight Inn it tasted like barbecue, just the way they’ve always done it.