The Wall Street Journal felt the swift and vicious wrath of Texas barbecue fans this weekend. Austin, the Best New Barbecue Destination was written to shed light on the burgeoning barbecue scene in the capital city. Instead, it will be remembered only for comically praising Franklin Barbecue’s boneless brisket that somehow “literally fell off the bone” according to writer Adam H. Graham. The story has since been edited online, and a correction was issued that states “Beef brisket is served boneless at Franklin Barbecue in Austin, Texas. An earlier version of this article said it had a bone.” But the incorrectly identified protein was just one of many glaring issues with the article.

1. “Texas style is generally marked by mesquite flavors…” Not in Central Texas, and certainly not at any of the restaurants being reported on.

2. “Austin is emerging as a new barbecue hub.” The barbecue boom started in Austin five years ago with the opening of Franklin Barbecue. The past tense, emerged, is appropriate here.

3. One of the four joints highlighted was Carillon in the AT&T Hotel on UT’s campus. As noted in the piece, chef Josh Watkins is no longer at the restaurant, nor is the Koren bibimbap Graham gushed about.

4. “President Obama cut in line to pick up a $300 order, fist-bumped the cashier and picked up the tab for everyone else inside.” Obama did cut the line, but he only paid for the order of the a couple that he cut in front of.

5. “When he swung past my table wearing a Pac-Man T-shirt and hauling a stack of wood…” I’ve never seen Aaron Franklin walking through his restaurant carrying stacks of wood.

7. An attached slideshow touts that Austin “is now a grilling hot spot.” Central Texas barbecue isn’t grilling, and the second photo of brisket and pork ribs is captioned as “Smoked brisket and pulled pork.”

8. In a piece that touts the growth of the barbecue scene in Austin – “more than a dozen joints have opened around the city” since 2011 – Graham goes to a total of two barbecue joints in Austin.

The author’s choice of the Salt Lick over Franklin Barbecue or Micklethwait has been lampooned elsewhere, but it comes down to personal preference, and there’s no use arguing over that here. I reached out to Adam H. Graham who apologized for the brisket snafu, while adding “The WSJ has strict guidelines for writers and I’ve been advised not to answer your Q’s, much as I’d like to.” I wanted to know what he actually ate at Franklin, so I looked back through his Instagram account to find what he meant by “earlier this year” in reference to the timeline of his visit to Austin. That incredible visit to the Salt Lick was eleven months ago on New Year’s Day, with a visit to Micklethwait the following day. There wasn’t a photo from Carillon or Franklin Barbecue to refer to:

In the end, we’re left with a missed opportunity. A national publication had the chance to report on the myriad new options for smoked meat in Austin, which is currently the best barbecue city in the country. Instead we got notes on a hotel restaurant dinner that can no longer be had, mini-reviews on two well-known Austin joints separated by less than a mile, and then the darling of many out of town guests – a trip to the Salt Lick. The whole piece seemed like an excuse for a meal at the Salt Lick, but then again, it is the author’s “personal favorite.”

For a better perspective on Austin’s barbecue scene from a national media outlet, look no further than Bill Addison’s recent spotlight on Franklin Barbecue, La Barbecue, and Micklethwait Craft Meats on Eater. He found only boneless briskets. 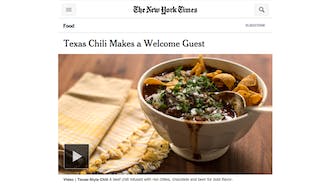 You Call That Texas Chili? Get A Rope. 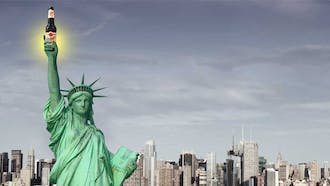 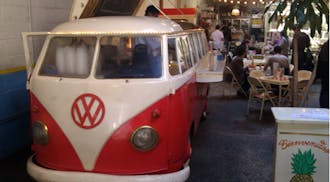 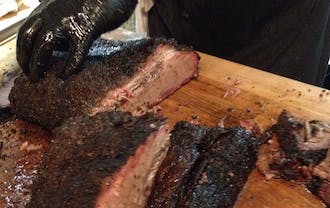 The Legend of BrisketLab Continues