Reid Guess describes his ‘cue as regular old barbecue. “The kind Jesus ate,” he jokes. The motto is painted right there on the side of the little red trailer parked beside Bare Arms Brewing just off the big circle in Waco. It’s not a commentary on the Baptist roots of Baylor, but rather a saying he shared with the staff at Lambert’s down in Austin, when he was their pitmaster, if a recipe was to be prepared without any riffs in the absolute classic sense of the dish. At Guess Family Barbecue, he’s trying to master the classics and get to the essence of barbecue.

Reid left his pitmaster position at Lambert’s, the self-described “fancy barbecue” restaurant, last year to be closer to his wife Sara’s family in Waco. Two toddlers can have that effect. He stressed how much he enjoyed his seven years in Austin, but he was eager to get to being more hands-on. “When you climb the ladder in a restaurant, you cook less and less,” he explained. Now, with a bare bones staff, he can do all the cooking he can stand for the two days a week the Guess Family Barbecue trailer is open. It’s just Fridays and Saturdays for now, but the demand keeps growing. If the Guess Family Barbecue staff can grow with it, they plan to expand their hours by the end of the month. 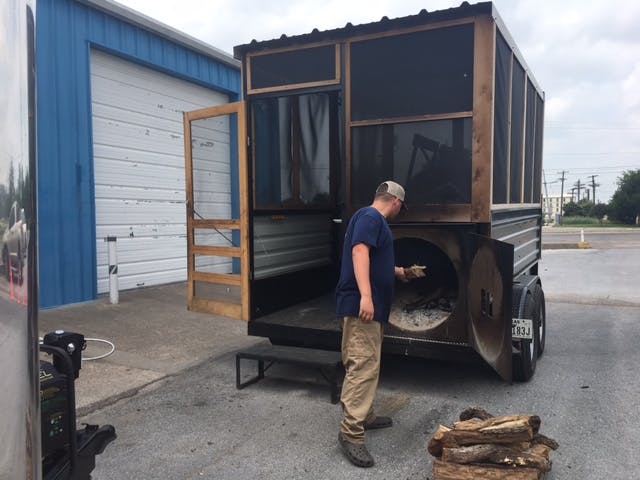 Fire is the only fuel at Guess Family Barbecue. There’s no oven or stovetop. The grits, milled locally at Homestead Heritage, are cooked to an almost pillowy softness in a huge pot heated by wood flames. The same goes for the beans, which weren’t ready at opening last Saturday. The only other side is an exemplary slaw. Ribbons of carrot and cabbage are short enough to fit comfortably on a fork. A mayo dressing, thinned significantly with vinegar, binds them together. It’s the perfect compromise between vinegar and mayo lovers. 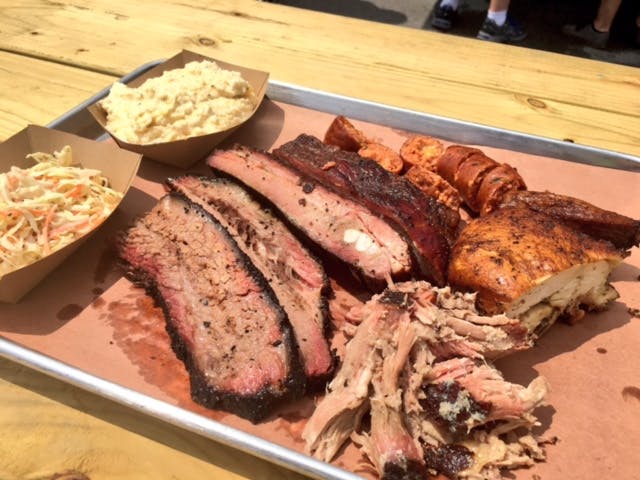 The small-batch barbecue (eight to ten briskets a day) is done in a trailer-mounted smoker, fueled with oak smoke. Reid and his father just finished welding a larger one to handle catering orders. The smokers, Ramon and Javier, are named after two of Reid’s beloved cooks at Lambert’s. “They’re the backbone of the restaurant,” Reid said, unclear if he’s praising the pits or his former staff.

Brisket anchors the focused menu. Reid uses an antibiotic-free, all-natural Angus beef label called Aspen Ridge (from beef giant JBS), but is planning a switch to 44 Farms in Cameron. “We’re about 45 minutes from that ranch down [Highway] 77,” Reid said. “I love that it’s local.” I loved the buttery tenderness of the smoked brisket. At $24 per pound, it’s some of the most expensive you’ll find, but Waco barbecue fans have been buying all that Reid can cook. After I posted the cost on Twitter, there was some spirited discussion about how much barbecue should cost. Reid told me they pay $4 per pound for raw brisket, and get a 50 percent yield, which means an actual cost of $8 per pound for the finished product. “We aim for a 33 percent food cost, so you get $24 per pound,” he explained. It’s harder to argue that it’s overpriced after a few bites of the best smoked beef in the county. 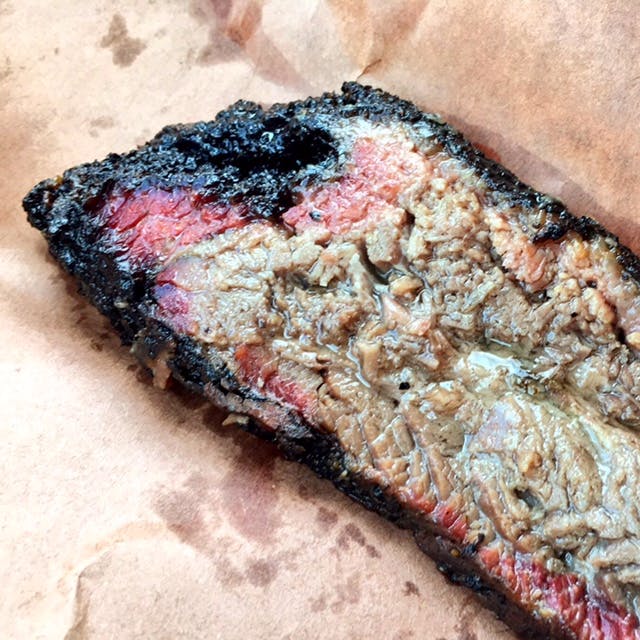 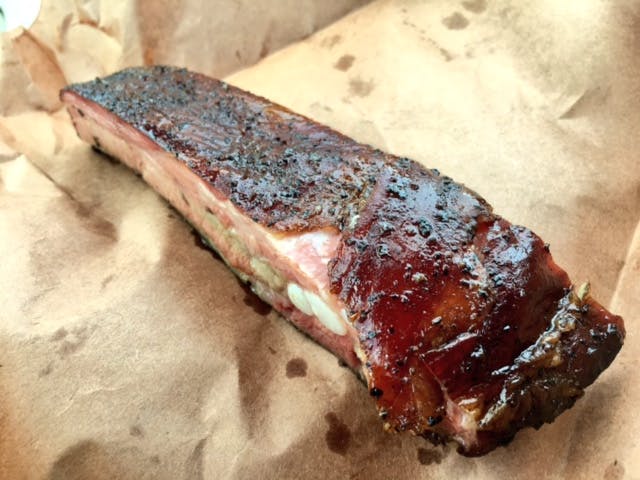 Glazed, sauced, or candy-coated seems to be the new direction for pork ribs in Texas, but here they’re a masterwork in simplicity. A good dose of salt and light sprinkling of pepper lets the smoke and the pork shine through. They’re stout, but still come off the bone easily enough. It’s as basic as a Texas spare ribs get, impressive even without the crutch of a sweet sauce. Jesus, I think, would love them. 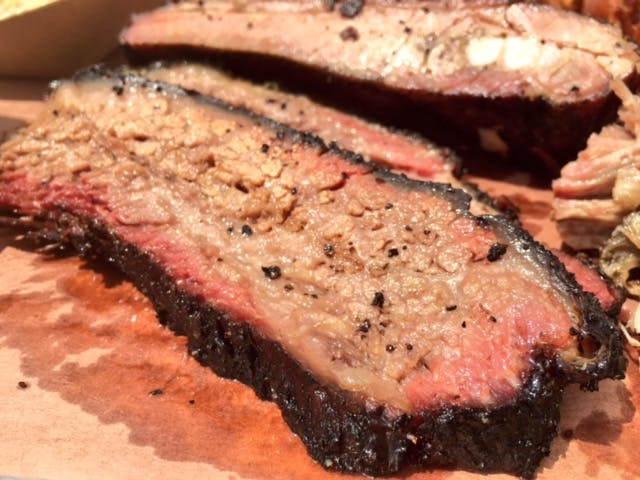 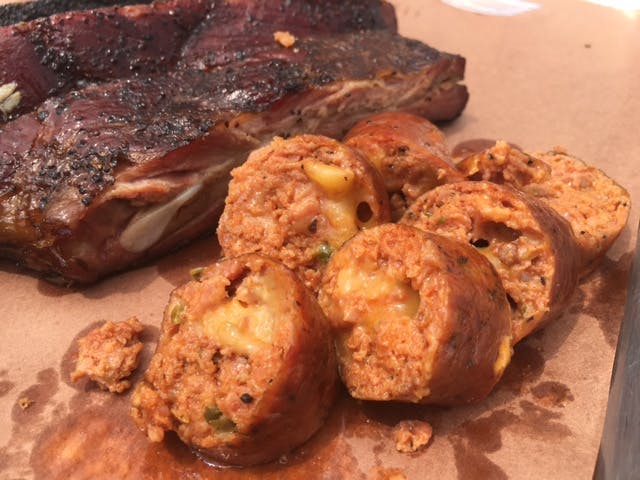 Reid’s nephew, Aaron, is one of the few who helps with the cooking. “He’s proficient in sausage making already, as a sixteen-year-old,” Reid said. Thick slices of jalapeño cheese sausage, the only kind they make, come with a salty, spicy twist I could’t quite put my finger on. “We put chipotle puree and a lot of French’s mustard in there,” Reid explained. The flavor reminds him of the sausage wraps he ate growing up in West Texas. Each bite is a whirlwind of flavors, but it’s a rollercoaster you’ll want to ride again.

Pulled pork and chicken round out the smoked meat options. Both are technically sound, juicy chicken and smoky pork, but when the target is plain old barbecue, sometimes that’s what you get. Maybe a dip in the pit-smoked barbecue sauce would have added the zing they needed, but I couldn’t find any on the tables or on my tray.

If you’re bored with the basics, there’s a weekly special as well. Flabby, undercooked bacon wrapped around stuffed jalapeños needed work one weekend, while the sweet chunks of tender pork belly served with pickled onions and micro-greens two weeks prior were a welcome modern twist on Texas smoked meats. 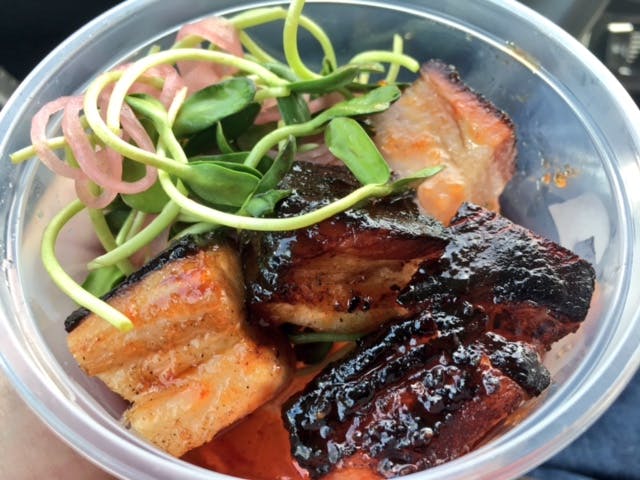 Touches like that show off Reid’s training. After high school he found himself pressure-washing restaurant vent hoods in College Station. It sparked a renewed love for cooking that he first learned from his father, who was the unofficial barbecue caterer in his hometown of Jayton. He decided to head to Minneapolis for culinary school at Le Cordon Bleu, and the education was intense. In a class of only six, which was eight students fewer than his high school, he enjoyed far more attention that the standard class size of sixty might get. But did he learn anything about barbecue there? “Not a thing. Not even a little bit.”

While Reid honed his barbecue skills in Austin, running this trailer since January has been a crash course in the barbecue business. He’s learning that he prefers the wood-fired smokers, and is also finding out that he can rely on his family for help. During my first visit, his son Elliot and daughter Emmi stood at the window. Elliot worked the register. He’s six, but a whiz with an iPad. When Reid was trying to learn the new POS system for the truck, Elliot watched over his shoulder and offered direction when he got stuck, so in the window he went. Two-year-old Emmi was there to remind everyone in line that her dad makes great barbecue. Although far from unbiased, she’s absolutely right.