It was Valentine’s Day, and some neighbors – who have also been married long enough to stay away from restaurants on the 14th – agreed to join us for dinner. I picked up a couple racks of beef ribs and had planned to smoke them indirectly. After too many dinosaur rides at Jurassic Quest (we did it for the kids) and a late lunch, I was tight on time. Some experimenting was in order. 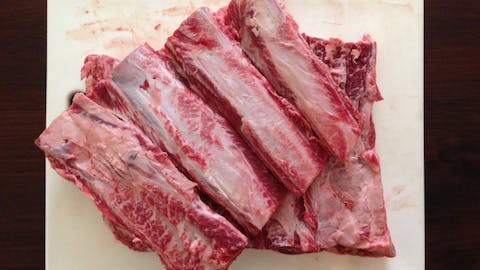 I figured I’d see how these chuck short ribs responded to direct heat cooking. I had two racks, so I deboned one to cook more like a steak. I planned to use the bones on the other rack as a heat shield. I prepared a mop sauce using beef broth, onions, and a some vinegar. Any acid like lemon juice would also work, but with the fatty beef, what this mop sauce doesn’t need is more fat like oil or butter. For seasoning, I just sprinkled them with a 50/50 Kosher salt and cracked black pepper mix.

I prepared a hot bed of charcoal initially, and got a feeder fire going for wood coals to add to the fire as the charcoal expired. Because I didn’t want to just grill the beef, I used a six inch extender ring on my Weber kettle grill that raises the grate to a total of fourteen inches above the fire. 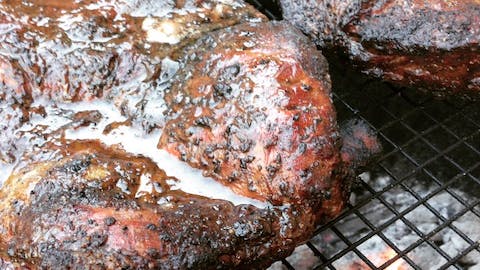 I thought the advantage of a boneless rack would be the ability to char both sides, and to get more surface area of crust. What happened was too much char as the fat from the ribs continually dripped onto the fire creating massive flare-ups. The meat also tightened up considerably without the bones to keep it adequately stretched. Even frequent flipping and mopping didn’t help. It actually spent most of its time sitting on top of the other rack with the lid closed. Raising the cooking surface even further from the fire would have helped, but the bone-in rack was so easy. There’s just no need to remove them.

Unlike briskets, beef short ribs are well marbled throughout. They have plenty of intramuscular fat to keep them from drying out like a lean brisket flat, which is what makes them well-suited for direct heat cooking. Even when indirectly smoking, Wayne Mueller of Louie Mueller Barbecue in Taylor talks about using the bones of the beef rib rack as a heat shield. In the direct heat method, it was even more crucial. 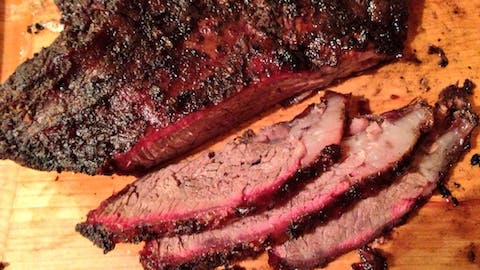 Both racks of chuck short ribs were done in 3 hours. As discussed, the boneless rack was less than ideal, but the bone-in rack was a success. Leaving the bone side down for most of the cook left the bones black and some were cracked. It didn’t matter because I wanted to remove them anyway. That way the beef could be sliced more easily against the grain and served similar to fatty brisket.

If it’s a prominent smoky flavor you’re after, this method won’t get you there. Fat dripping down into the coals during direct heat cooking creates a flavor all its own, but it’s not wood smoke. The flavor and texture are still impressive. It also shaves a couple hours of of the cook time, which means you can start them after lunch and get dinner on the table.