Joseph and Lucinda Flores took over Houston Barbecue Company in Houston’s Energy Corridor neighborhood in 2014. Joseph had close to twenty years of restaurant experience with the Pappas family, Olive Garden, Chili’s, and Buffalo Wild Wings. He’d never run a barbecue joint, but he still knew the pair of massive steel smokers in the pit room were special. “When we walked back there on the tour, I was like, ‘Wow. These are old school,'” Flores said. They were reportedly designed to replicate the pits at the original City Market in Luling. Kurt Craig of Luling City Market in Houston had been the previous owner of the joint, which first opened in 2003. Despite its equipment, my first visit in 2015 wasn’t memorable. A return trip a couple of weeks ago was more promising.

Surprisingly, Flores credits Hurricane Harvey as a positive turning point. The storm itself didn’t do much damage to the restaurant, but two days after Harvey reached Houston, the Army Corps of Engineers opened the floodgates of the Addicks and Barker reservoirs. Massive amounts of water were released into Buffalo Bayou, and Houston Barbecue Company sits along its banks, just a mile and a half down from the floodgates. The water didn’t recede for two weeks, and the restaurant was closed for more than five months. When it reopened, the Floreses felt recommitted to their restaurant and the quality of the barbecue. “We feel like it sort of swiped everything away, you know? A clean slate,” Joseph explained.

Their pitmaster, Juan Carmona, agreed. Without any prior barbecue experience, he started working for the couple about a year after they took over Houston Barbecue Company. He learned to run the pits from Angelica Martinez, who still works at the restaurant, but it was after Harvey that Carmona felt like he hit his stride. “Before Harvey, I wasn’t paying attention. I wasn’t taking care of it,” Carmona admitted. He now checks every cut for the right doneness and spends most of his waking hours feeding oak wood into the smokers and monitoring their temperature. During my latest visit, at 3:30 one afternoon, Carmona was ending his shift. He planned to return before 10 p.m. to cook through the night, but he said the hours don’t feel like a burden. “I’ve put more passion into it. This is really something I want to do now,” he said of the renewed energy he finds in the job.

They’ve also raised the quality of the raw meat that goes into the pits. The brisket is upper choice grade, and the pork ribs are Duroc. This change is why their meat supplier, Paul Ruffino of Ruffino Meats, prompted the Houston Chronicle‘s J.C. Reid and me to give the place another try. Reid and I ate together. The sweet-glazed pork ribs were tender, but not too yielding. Slices of smoked turkey were superbly juicy and smoky. Reid took more home for dinner that night.

The brisket had also improved. A sign at the cutting block explains to uninitiated customers the difference between lean and fatty brisket. We tried fatty slices with a black bark and solid smokiness. The fat could have been rendered a little better, but leaving the briskets on the pit a bit longer is an easy adjustment. Slices of lean brisket were more tender, with a nice fat cap, and they were just juicy enough when freshly sliced. They dried out on the tray in a hurry, though, so eat them first. The brisket those slices were cut from was a huge one, probably in the twenty-pound range. A brisket that size isn’t easy to smoke, but Carmona said he serves the smaller ones early in the day and lets the larger ones continue smoking, while wrapped in butcher paper, to serve in the afternoon and evening. He also promises they don’t serve leftover brisket the following day.

Brisket is also the main ingredient in the chili, which is made from Joseph Flores’s recipe. All the brisket trimmings go into the pot, along with more ground brisket as necessary, for a batch. The menu board listing specials mentions that it’s available by the cup or bowl, but they’ll let you add it to most anything—like tater tots or even a brisket sandwich. I ordered a side of tater tots with some of the brisket chili and cheese. The side alone would make for a good meal on a cold day. I also enjoyed the dirty rice, and a bowl of charred corn with grilled onions and peppers was a nice change from the same creamed corn on most barbecue menus these days. My meal at Houston Barbecue Company was also the first time I’ve seen sriracha onion rings anywhere, let alone at a barbecue joint. The bright red rings come in frozen but were fried to order, and I really enjoyed the kick.

Hurricane Harvey derailed plans for additional locations. Flores said that still may happen, but he’s focused on getting the food right and not dwelling on the challenges the storm brought with it. “There are a lot of negatives in that, but we focus on the positives,” he said, crediting his staff for taking advantage of the unplanned clean slate when the restaurant reopened in early 2018. “We had to start all over again,” he said, and the barbecue is all the better for it. 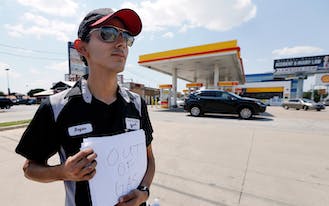