Dale Earnhardt Jr. held a charity event at the Hard Eight BBQ location in Roanoke last week. I arrived early before the press conference and sat down with Chad Decker who opened the first Hard Eight BBQ with his wife and in-laws ten years ago. Since then it has grown into a small chain of three restaurants. It’s pretty incredible that ten years after jumping head first into the restaurant business, he now oversees the operations at three successful restaurants separated by a hundred miles. I was curious how he got here.

Chad Decker: 2002 was when we found the location. There was a vacant gas station sitting there at the corner of 281 and 67 in Stephenville.

DV: So you decided to buy it?

CD: There wasn’t even a for sale sign on it. We did some research and found out that a local real estate agent owned it. We drove over there together and looked around, and I bought it that day. The very next day we started tearing it down brick-by-brick.

DV: I assume you bought it with the hope of making it a barbecue joint.

CD: Exactly. We had the vision of what we wanted to do, but we were searching for the right location. It was me, my wife, and her parents Phillip and Vicki Nivens. We designed a building to look like our hunting camp in Brady, Texas. The stone and wood and the tin roof…the patio you see now was the front porch at our hunting camp. Needless to say, when you walk in there you can tell it was designed by a first time restaurant owner. We made a lot of mistakes.

DV: It sounds like the original location was the guinea pig.

DV: Are you from Stephenville?

CD: Actually, I’m from Llano, Texas. We grew up in the Hill Country. That’s where I learned this style of cooking.

DV: That’s where they do all the direct heat cooking.

CD: That’s right. That’s where it all grew out from. My dad had a pit like this one, so did my church and my 4-H club. We all built pits like this in town. It’s just how everybody cooks in the old German style of barbecuing.

DV: I’ve also heard these called Dutch pits. Are you familiar with that term?

CD: Yes. It’s the same thing. The Hill Country area like Llano, Fredericksburg, Mason, and even a little toward the Johnson City area – all that area had a huge German influx when it was settled.

DV: So, you grew up cooking on pits like that?

CD: You bet. We cooked more outside this way than we cooked inside. I didn’t know we had a stove until I was about twenty.

DV: What were you doing before you opened the barbecue joint?

CD: I was training horses for David Dewhurst in Fredericksburg, Texas.

DV: Where do you live now?

CD: In Stephenville. I’ve lived there for the last ten years, but I met my wife there earlier. She was going to school there at Tarleton [State University]. I’d met her when I was up there rodeoing.

DV: What did you do in the rodeo?

CD: I tried just about everything, but mainly I team roped and steer roped.

DV: I guess that won’t kill you as easily as bull riding.

CD: Yeah. You can lose some digits though. It eats you up a little bit at a time.

DV: Do you have all your digits?

CD: Yes [holding up his hands], I’m not that good at team roping.

DV: Which one is more difficult, the rodeo or the barbecue joint?

CD: Oh man. I guess the daily challenge of running a business. I mean, you’re in a cooking contest every day. Your judges walk through that door every day.

DV: What made you want to open a barbecue joint?

DV: You just wanted to lose a bunch of money?

CD: I guess so, and I did. My family and I, we had no idea how to run a restaurant. The most we knew about the restaurant business was eating in one. We knew what direction we wanted to go in. God bless my father-in-law who decided once we took that direction that we’d stick to it. It was a lot of trial and error and a lot of pocket money for us to get where we’re at today. A lot of my learning was through failure.

DV: But you did get it open.

CD: We opened in February of 2003. I can remember the first day. We didn’t even have change for the register. I’m not lying. We had no idea…that’s just how overlooked some of the details were.

DV: Did you at least take credit cards?

CD: We did take credit cards. Luckily enough, the first ten or fifteen people in line had credit cards so we ran to the bank to get some change. It all seemed like a big garage sale, but it was a rude awakening the next day when I realized I had to keep doing this again for the rest of my life. It was an eye-opener. It wasn’t a fun backyard barbecue anymore. It was work.

DV: Were you working the pits then?

CD: Oh yeah. It was me and Stan Edgar who has been my partner in crime through all this. We were both working eighteen-hour days for months. We worked hard to get where we are today.

DV: And now you’ve grown to how many locations?

CD: We had four, but now there are three. We closed the Brady location in the spring of last year.  We had a lot going on in this area, and it was too much to take care of that location too.

DV: Did you buy out Lone Star BBQ there in Brady?

CD: Yes. It’s a funny story. About six months after we opened the Stephenville location – still not knowing what we’re doing – we bought out Lone Star BBQ. That’s smart, isn’t it?

DV: That’s one way to stretch yourselves even thinner.

DV: This location [in Roanoke] is the latest to open, correct? 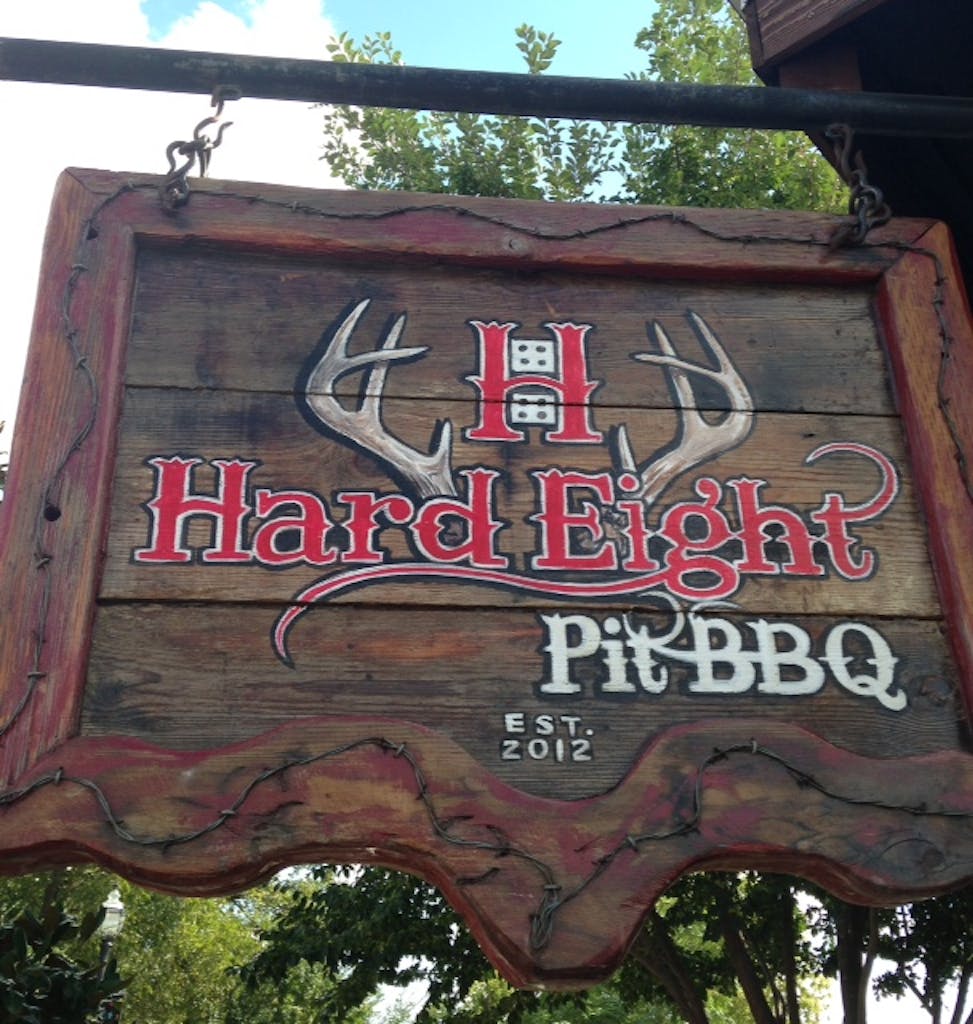 DV: Is this the largest one?

CD: No. Coppell is the biggest. It seats about twice as many as Stephenville or Roanoke.

DV: Have you looked at expanding anywhere else?

CD: We’re always looking for open doors. We’d definitely expand if we found the right location. One of these just doesn’t fit anywhere.

DV: You’ve borrowed quite a bit from those other famous Hill Country barbecue joints with the direct heat cooking, ordering meat right off the pit, and the free beans, but the menu is actually quite a bit bigger.

CD: Yes sir. We’ve expanded our menu since we’re up here in the Metroplex. We’d tried to incorporate more things for families. We also pride ourselves in one of the best ribeye steaks that you’ll ever eat.

DV: And everything is cooked over mesquite, right?

CD: Yes. All mesquite. We’re doing the best we can to eradicate the mesquite problem.

DV: Where do you get yours from?

CD: Right there in the Stephenville area. Some is from Eastland County, but most is from right there in Erath County.

DV: Do you cut it yourself?

CD: No. We have a guy who is an independent supplier who cuts it all for us.

DV: Did you have him from day one?

CD: No. We started by cutting our own. It took me about ten minutes to know I didn’t want to deal with that anymore.

DV: With three locations, I’d imagine your role has changed from pitmaster to manager. Describe that transition.

CD: God has blessed me with some great managers. That has enabled me to go out and explore other options in different cities. I’m still the general manager and president of operations, but I’m also a scout. I don’t strap the apron on much anymore.

DV: Do you have any of your immediate family involved in the business?

CD: I have two daughters that are ten and thirteen. My wife is the catering coordinator. I’ve got three or four guys who have been with me for a long while. They were unloading wood with me back in Stephenville.

DV: What is your most popular menu item?

CD: Brisket and sausage. We also have a lot of rib eaters. It also varies by location. Stephenville has a lot of big beef eaters so we do a lot of brisket and sirloin there. Here in Roanoke there’s a lot more turkey and chicken.

DV: How much meat do you go through?

CD: Between all three locations, we’ll go through 150-200 cases of brisket every week. [There are five briskets in a case].

DV: You cook a little hotter and faster than most, right?

CD: Not really. We don’t serve anything that hasn’t been on for about twenty-four hours.

DV: So your briskets are on the pits for twenty-four hours?

DV: Wow. I had no idea it was that long. Cooper’s uses a similar style, but gets them done in about six hours.

CD: We could make them done in six hours, but I prefer to cook them longer.

DV: They can’t be over the direct heat for that entire time.

CD: No. They’re holding at about 140 for more than half that time. I’d rather have a light smoke on them, then wrap them in foil and keep them nice and juicy.

DV: While I enjoy your barbecue, I used to really enjoy the free beer in Stephenville. What happened to the free beer?

CD: That’s a whole other story. When we first opened in Stephenville, Erath County was a dry county. We were in the process of getting our license to be a private club. We went through all the steps, but gave away free beer in the meantime. About four weeks into it we got our TABC license. It just so happens we were having my brother-in-law’s wedding reception on the patio at the restaurant with all this beer and wine. In the middle of the party the TABC officer showed up to give us our license. He said all the beer had to be off the premises that night if he was to give us the license. We were right in the middle of the reception so my father-in-law and I went inside to meet with the TABC officer. We asked if there were any other options. He said no, so my father-in-law said “I guess we’ll just keep giving it away then.”

DV: That was certainly a poorly timed visit.

CD: Yes, it sure was. Well, we sell beer now. Erath County is no longer dry, but for eight and a half years we gave every drop away. I know it sounds funny, but I’ve probably bought enough beer for every person in Texas, so it’s about time they buy me one.