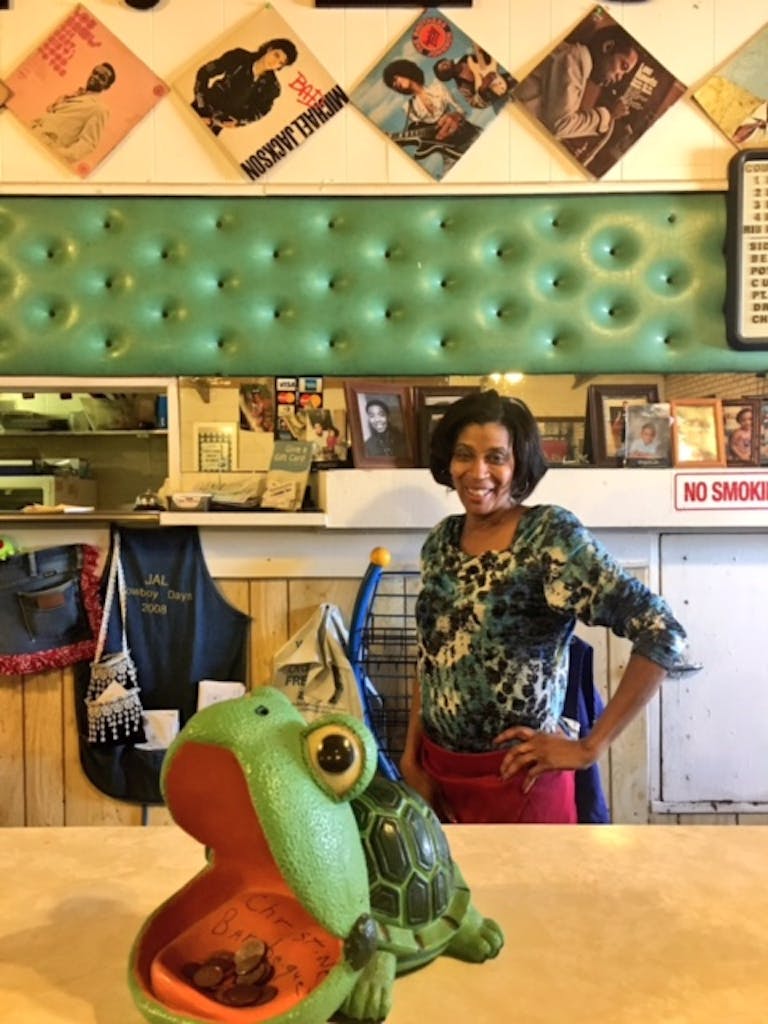 Records line the wall above the bar at Christine’s Blues ‘N BBQ. As soap operas played silently on the television, I asked her where all the good music was. With a smile, as if she thought nobody would ask, she found a classic R&B Station and hummed along. That’s customer service at Christine’s. She told me all her customers are family, but that also means you might be asked to get your own drink out of the cooler if she has too many folks to tend to.

Christine’s sits along the main drag in tiny Kermit, Texas. Jones chose the town seventeen years ago, although she live 45 minutes away in Odessa. Everything at the restaurant is homemade, even the pits, built by Thomas Garden, He was the only other employee around when I visited. He built two of the three pits on site, all of which use only wood. He’s especially proud of the trailer mounted one that swivels.

Wood isn’t the easiest thing to come across in Kermit. Thomas said they mostly get mesquite, but much of it comes from some distance away. Even though mesquite grows around these parts, he said the trees are often too small. He’s also happy to use pecan, if there’s some for the taking. Cooking with all wood in Kermit isn’t easy, but Jones and Garden wouldn’t do it any other way.

Daniel Vaughn: When did Christine’s open?

Christine Jones: We’ve been here 11 years, in this building, but we were across the street before that. We’ve been in business for 17 years.

DV: And it’s always been barbecue?

CJ: All barbecue, right from the pit. You did not take a picture of me on that pit looking ghetto, did you?

CJ: Did you take a picture of the plate?

CJ: I could have made it prettier.

DV: It looked just fine. Where are you from?

CJ: I live in Odessa. I’m originally from Trent, Texas, but I was raised in Jal, New Mexico nineteen miles down the street. My mom is still in Jal. She’s the president of a bank, and my dad’s a trucker.

DV: You live in Odessa, so you commute up here to Kermit?

DV: When did you decide to get into barbecue?

CJ: Seventeen years ago. I wanted to just to chicken, but I decided we should do barbecue, so that’s what we did.

DV: Why did you pick Kermit?

CJ: I was going up to Jal to look at a building, and I came through Kermit. I stopped across the street, where the burrito place is now. They had it for lease, so I thought I’d do it in Kermit. I ended up buying the building.

DV: That way you could cook Texas barbecue instead of New Mexico barbecue.

CJ: Right. I love being here.

DV: Has Kermit gotten bigger since the oil and gas boom?

Thomas Garden: The amount of people that come in here to work is bigger than the town.

DV: So more people come from outside Kermit to work than people who live here permanently?

CJ: Right. They stay here a couple years. I might have a best friend who’s been coming for three years, but next month they might say they’re leaving. Then we’ll be taking pictures and crying. They’re from Oklahoma or California. It happens all the time.

DV:Does it make it harder to get attached to customers knowing that they’ll only be here for a short time?

CJ: No. I get attached to everybody. We’re family here. That means if I’m busy, then you can get up and get your drink. That’s family.

DV: Do you have any family who work here with you?

CJ: I have kids in the Dallas area and in Ennis. I have thirteen grandkids. They come here over the summer and for spring break. I can’t wait to go get them. One grandson lives with me in Odessa. I’m raising him.

DV: Does he work here with you?

CJ: He used to, but he’s sixteen. He’s all about cars and girls now. He plays football for Permian.

DV: Is it usually just you and Thomas working here?

CJ: No, We have Rebecca, Desiree, and my daughter-in-law Desiree too.

DV: I saw a lot of mesquite out there. Are you cooking with all mesquite?

CJ: We use mesquite and pecan. What did you like in the barbecue? 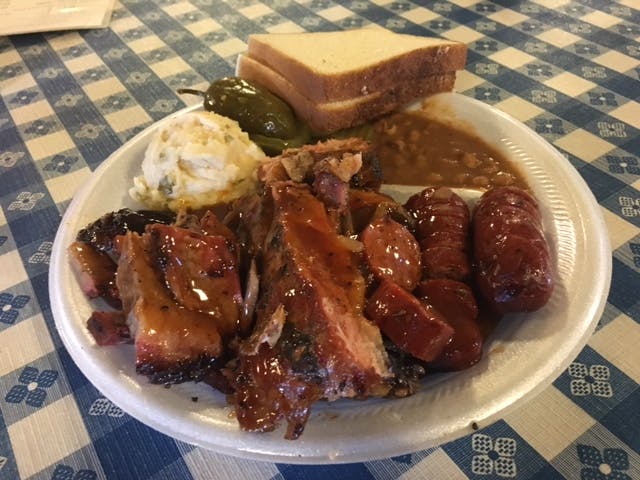 DV: I really liked the sausage and sauce. Do you make the sauce?

CJ: We make it. We do what we have to do. A lot customers buy it by it by the cup.

DV: Where is the sausage from?

TG: It’s out of Snook. Slovacek’s.

DV: The potato salad is good too, but it’s really sweet and almost completely mashed.

CJ: We hand-peel potatoes, cut onions, and cook our own beans. We don’t buy that stuff already made. We do it all ourselves. [She looks over a table with two large bags of potatoes on it.]

DV: Do you need to peel some potatoes?

CJ: I do need to peel some potatoes, but don’t take a picture of me peeling potatoes.

DV: Okay. I see outside you’re cooking on the small pit. When do you fire up the bigger one?

TG: The small one cooks faster. The big one is for brisket.

DV: What’s the most popular order?

TG: Everybody gets brisket, and then sausage.

DV: How long does that last you?

CJ: Two days, but guess what they ask me to do at every family reunion. Barbecue and potato salad. 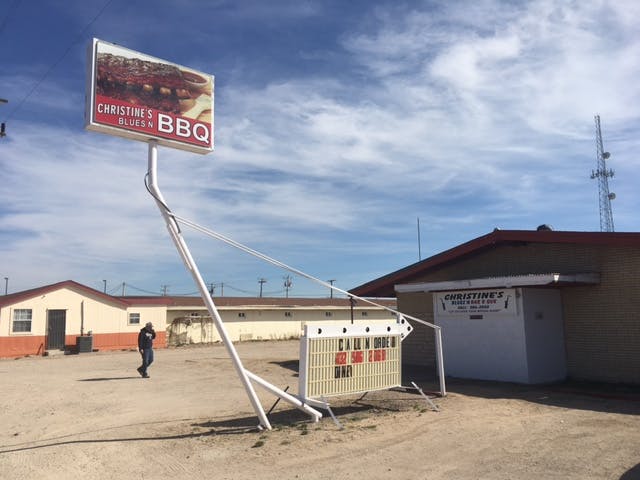 CJ: I love barbecue. I eat it every day. If anything goes wrong with the barbecue, I’d rather you tell me you didn’t like it than to go criticize me to somebody else.

DV: What do you prefer?

CJ: Ribs and hot links. Then one month, I might get a different craving. I might eat a chopped brisket sandwich five days in a row.

DV: Do you eat anybody else’s barbecue in Texas?

CJ: Not in Odessa, but when I go out of town, I like to go try it to see what they’re doing. I’ll take others people’s advice, but I’ve been cooking barbecue, at least for my family, for 37 years. One man told me to boil my potatoes whole. I didn’t like that. I’ll keep peeling my potatoes. My way is ok.

DV: Do you use a specific rub recipe?

CJ: No. We use different things. Steak seasoning, Cajun seasoning, lemon pepper on the chicken.

DV: So you don’t use just one type of rub.

CJ: We don’t do the rub or put it in the oven to make sure it’s tender. We gotta work that pit out there, because that’s what we’re supposed to be doing. We’re a barbecue place – a small, country barbecue place.

DV: It’s a cool spot you’ve got here, and when those pits out back I knew you weren’t doing any automated barbecue here.

DV: Have you ever thought about leaving Kermit and opening closer to home in Odessa?

CJ: The oil field is good. I’m content with what I’m doing. I want to be a millionaire, but it’s just like if you want to be a professional football player. Is it ever gonna happen? You see what I’m saying? It’s one chance out of a million.

San Antonio, After All That

A Texan’s Guide to the Kansas City Taco Scene