“The further west I go, the more I seem to like the barbecue.” That’s a curious way for a native of North Carolina to start off a press conference, but NASCAR superstar Dale Earnhardt Jr. was just being honest. He doesn’t much care for the pulled pork barbecue of his home state. In fact, he has ribs delivered to his house in Mooresville, North Carolina from Rendezvous in Memphis; proof of which can be seen in this episode of MTV’s Cribs (go to the 8:00 mark). Despite that fact, his new line of potato chips features a flavor called Carolina Barbeque. With the thick red sauce there on the bag, they must have their precedents in the Piedmont. 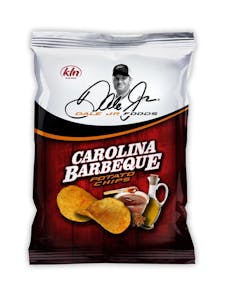 Dale Jr.’s overall interest in barbecue has grown recently after learning a bit about smoking meat at home. He says he learned everything from barbecue competitor and TV host Myron Mixon. He used those tips to smoke a brisket for Mother’s Day earlier this year. It should be no surprise then that it was Dale Earnhardt Jr. who was a guest on Mixon’s BBQ Pitmasters show this past season.

Dale Jr. will be in Texas this weekend for the AAA Texas 500 at Texas Motor Speedway (TMS), but he visited Roanoke a few weeks back. He came to Hard Eight Pit BBQ for the BBQ Pit Stop with Dale Jr. benefiting the Speedway Children’s Charities. For thirty minutes before his appearance to hundreds of adoring fans on the Hard Eight patio, he sat with members of the media in a side room. It may be Dale Jr.’s new found love of barbecue, or simply the venue, but the PR folks for TMS decided to invite me. They didn’t know I would hijack the press conference.

#DaleJr talks to the print media while a giant elk looks on. pic.twitter.com/iSwWJD6OFi

For a while the questions were predictably about racing. I grabbed a small plate of barbecue and drank my first Mountain Dew (A Dale Jr. sponsor) in a long time while I listened. Then he made the comment about liking barbecue better the further he went west. Dale Jr. then made a comment about being able to make his own barbecue these days.

Daniel Vaughn: Have you gotten good enough with your barbecue at home to stop ordering the Rendezvous ribs?

Dale Earnhardt Jr.: Well, I don’t know. The Rendezvous ribs are pretty good. Anytime you go into town you have to go by there if you’re a fan of the place. I enjoy the trial and error, you know?

DV: That’s what barbecue is all about, right?

DEJ: That’s been my experience. You get some good results and bad results and that gives you an idea of what works and what don’t work. Every step that you implement is key. There aren’t any shortcuts, and the results will tell you the truth. I’ve enjoyed it. You know, you cook a lot of food, like a fifteen pound brisket, and feed your family and friends and everybody tells you how good it is. It’s a good thing.

DV: Is it going to be brisket instead of turkey for Thanksgiving?

DEJ: I’ve been asked if I’ll cook a brisket for Thanksgiving, so we’ll see how it goes.

Random conversations about racing leads to a question about his patience on the track and how he’d like to works towards getting points toward winning the cup.

DEJ: I’d like to get it all back at once.

Here I realized the irony of a man like Dale Earnhardt Jr. who makes a living by slamming on the accelerator. He can still find the patience to make a proper smoked brisket. Then a funny thing happened. Other reporters started asking barbecue questions.

Reporter: In your travels throughout the South and your appreciation of barbecue, what have you noticed about the different styles of barbecue across the country?

DEJ: Obviously North Carolina has a completely different style than in Memphis or Texas. I’m not a huge fan of North Carolina barbecue. I like Memphis style barbecue and Kansas City. Oklahoma Joe’s has a style that’s more my speed. I’m a big fan of Myron Mixon. I’ve read a couple of his books, and I’ve learned the little bit that I know about barbecue from those books. They’ve helped us get up to speed and make an edible brisket.

DEJ: Wet. I also really like the dry rub ribs like they do at Rendezvous in Memphis, but those are really hard to replicate.

Reporter: Have you done Corky’s in Memphis?

DV: You said you’re not big on Carolina barbecue. Do you at least have an opinion on the eastern side versus the Piedmont?

DV: Did you grow up eating barbecue?

DEJ: I really didn’t. We had barbecue places in North Carolina and we’d go there occasionally to eat, but I wasn’t aware of how regional it was and how different the styles were.

DV: Do Gary’s, Troutman’s, or Lancaster’s [barbecue joints near his hometown of Kannapolis, NC] mean anything to you?

DEJ: I’ve been to all those. To me they weren’t a big deal. Going to someplace like Oklahoma Joe’s was a big deal to me. Seeing them on Man v. Food and other TV shows made me want to go. Then seeing BBQ Pitmasters, even before I was on the show I was watching Pitmasters, I really enjoyed the competition aspect of it. I wasn’t really a huge cook to begin with, so what really drew me to barbecue and what made want to do it is the process. Between starting the smoker, and even the night before soaking the wood and all that. That’s really similar to preparing a car during the week to get ready for race weekend. You get the trailer ready, you get the gas on the truck, you get the car ready and grease the bearings, you put the motor and tranny in…the process and the steps you need to take are all really similar to barbecue to make it all work. I enjoy that process of making something like that. You can also do it with your friends. It reminds me of when we went late model racing down in Myrtle Beach. It was all friends helping because you couldn’t afford to pay anybody. It’s like that hanging around smoking meat. It’s just you and your buddies and everyone’s pitching in, everybody’s got ideas and we talk smack. I even take notes about what works and what doesn’t work. I need to keep track of how long I did something or any adjustments I made. It’s just like working on a car.

DV: You just left Kansas City and flew here to Dallas to eat barbecue here at Hard 8. Is there a statement there about Kansas City barbecue that should be implied from that?

Reporter: You mentioned Man v. Food. Have you ever done any food eating challenges?

DEJ: No. It’s just a great show. I think my girlfriend got me into watching all those shows. I like Man v. Food, Diners Drive-ins and Dive. Restaurant Impossible is pretty good too.

Reporter: [to Dale pointing to me] Ask this guy what he does for a living.

DV: Hi. I think you might have a copy of my book. At least I signed a copy for you that a friend of yours brought to one of my book signings.

DEJ: Yes. I’ve got this book…a hardback, a thick one. Y’all went to a lot of restaurants. Like ton and tons. I peeked through the book, but I haven’t read it yet.

Maybe he will now.

Three days after the interview,  Dale Jr. finished 8th at the race in Kansas. Going into this weekend’s race at Texas Motor Speedway he sits in the 7th spot overall, just 56 points behind leader Matt Kenseth. If you don’t have anyone to root for in the race, then you might as well pull for the guy with a real love for barbecue. If you’ll be at the race, then you might want to track down the Pig Rig at TMS where they’ll be selling a Shake ‘n Bacon Brew milkshake with beer and bacon mixed in.