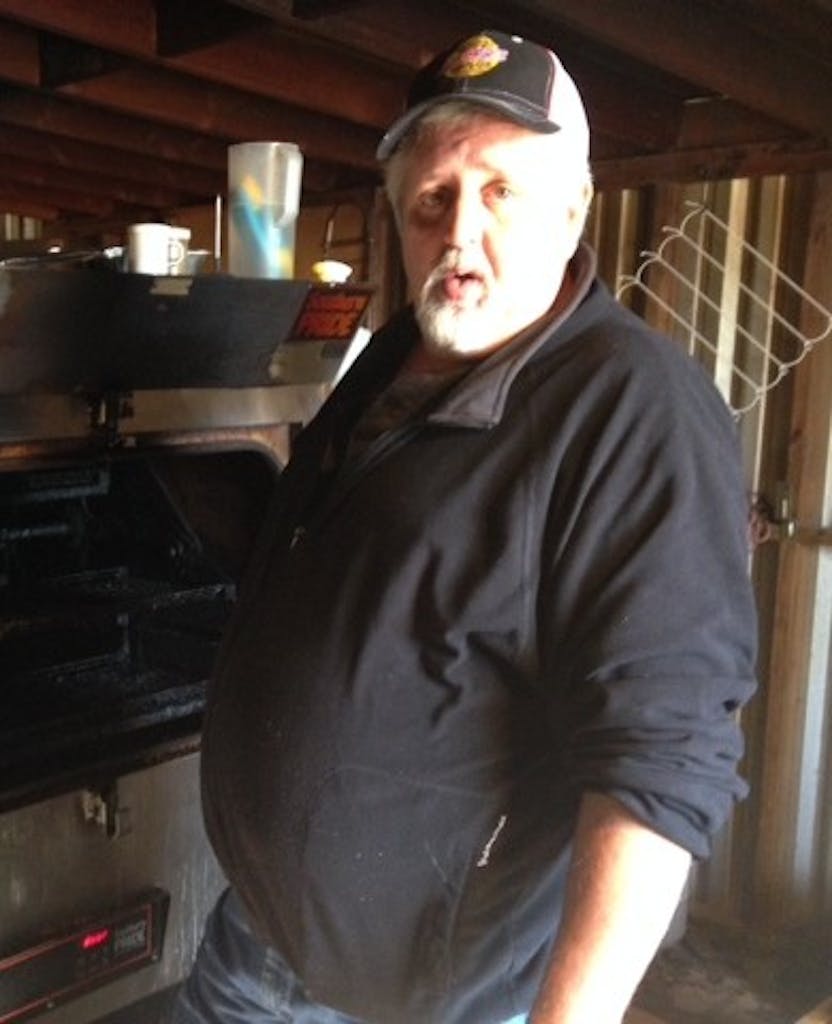 About six weeks ago I sat down with J. D. Bost at Jasper’s Bar-B-Q in Waco. He’s the general manager of this nearly century-old barbecue restaurant on Elm Street started by an Italian immigrant. Since the DiMaria family sold the business it has gone through multiple hands. Now a trio of local investors own it, and J. D. Bost is the man they hired to run the joint. J. D. has not only kept the traditions going of boiling the meat in a large vat of au jus, but he has also added some menu items. Sliced smoked brisket can be had from the flats that Bost smokes in the rotisserie that sits in the kitchen. That’s also where he has developed his sweet glazed pork rib recipe. Even with all these new menu items, most people are here for the chopped beef. By the end of the interview, you should know how to properly consume it when you come visit.

Daniel Vaughn: The history of Jasper’s goes back a long way. When did it open?

J. D. Bost: It started in 1915 [Jasper DiMaria’s obituary says it was 1918, while Tony DiMaria’s says it was 1915. The business’s logo on Facebook says 1919], so next year is actually our one hundred year anniversary.

DV: Are you going to celebrate?

JDB: Yes. We have several options with Baylor Stadium coming just up the street. Traffic to the stadium will route down Elm Street in front of us, so we’re kicking around several ideas with the owners.

DV: Who started this place?

JDB: The man who started it was named Jasper DiMaria. He started a small pushcart fruit stand which grew and grew until he built a building on this site. Over the years it has expanded in two or three phases.

DV: Was he selling barbecue from a fruit cart?

JDB: No, but he got a lot of traffic because he was at the end of the rail line here. It was the last stop before you went to Dallas which was a long haul. You’d get out here to stretch your legs and get some food. As the fruit business grew he started selling the barbecue. There’s a meat packing place down the road that he’d go and buy a quarter of a cow or a bull.

DV: Do you know if it was the forequarter of the steer that he was cooking?

JDB: I’m not sure, but I assume so. Brisket’s always been a big part of the barbecue here.

DV: If he was getting beef quarters back then, I’m guessing the primary menu item was chopped beef.

JDB: Chopped beef was the barbecue back in the day. They only started smoking the meat here with any significance just ten or twelve years ago.

DV: It was just boiled before you started using the smoker?

JDB: Traditionally back then barbecue was a boiling process. The pit back there, which is still the original pit, is a boiling pit.

DV: So there’s a big pot inside the pit?

JDB: Yes. It’s a big pot. The signature item here is the gravy. It’s the dipping sauce which is also what the meat is boiled in. It’s a byproduct of the way we cook the meat, but it’s the most popular thing here. If we run out of gravy, we’ve got a problem.

DV: To this day, that’s still the way you cook it?

DV: Do you smoke it then boil it, or boil then smoke?

JDB: We’ve modified the process a bit since I’ve taken over. We smoke the fatty end of the brisket first, then we cut it into thick steaks and boil it. The lean end of the brisket is seasoned with a brisket rub and cooked in the smoker. That’s what we serve for sliced beef.

DV: And the fatty beef is just served chopped?

JDB: That’s right. Jasper would chop it up on that chopping block [pointing to a nearby block] and sell it until they ran out. The legend is that they’d be standing in line down the street, and he’d walk down the line to a certain spot, raise is hand up and say “that’s it. End of the line. We’re out of food.” Then, his cousin Tony DeMaria opened one across the street, so when Jasper drew that line the people at the end of the line would go across the street to Tony’s joint and eat there.

DV: Is that the same Tony DeMaria that’s down the street today?

JDB: Yes. I’m not sure when they moved, but that’s them down the street. Once Jasper got out, his son took it over and ran it. Most of the people you talk to now who say they remember back when Jasper had it are actually referring to the son.

DV: Was his name Jasper?

JDB: No. They just called him that. His name was Tony.

DV: So that would mean another Tony DiMaria/DeMaria in town.

JDB: Yeah. Maybe that’s why they called him Jasper.

DV: Do you know when this building was built?

DV: And it’s been added onto a bit since then?

JDB: A few times. About five years ago they added a big section on.

DV: When you started working the pits here, what part of the cooking process did you change, if any?

JDB: Before it wasn’t smoked. It was just boiled in the gravy and chopped. At one point in time they had smoke in the pit which smoked the gravy, but they stopped doing that. I just decided to smoke it in a smoker first. I think it improves the gravy and the flavor of the meat.

DV: Other than that, is the gravy the same recipe that’s been used in the past?

DV: Is there more to it than water and some spices?

JDB: Yeah. It’s an accumulation of what we cook in it. One of the popular items is neck bones. They’re neck bones from bulls or cows. We do those once a week. There’s very little profit in cooking and selling neck bones, but they add a flavor that you can’t get without them. We serve them on Wednesdays. We open at 9:00 and they’re gone by 9:15.

JDB: I had people knocking on the door at 6:00 trying to buy them in advance, but we just can’t.

DV: You open at 9:00 and so does Tony DeMaria’s down the street. That’s not a very common time for urban barbecue joints to open.

JBD: My philosophy is that I’m here at 5:30 in the morning putting meat on the pit. If I can sell four or five plates of food while I’m here, I might as well. A lot of people eat here every day for breakfast. I’m actually considering opening up at 7:00 for the police officers, fireman, and shift workers that get off them. There’s really not much for them to eat at that hour.

DV: How did you get involved in the business?

JDB: The owners bought it about seven months ago. I had another business that I’d worked them on. When it came up that they needed a manager to run it, it’s something I always wanted to do.

DV: Do you know when the DiMaria family sold the business off?

JDB: No. I know there have been four or five owners over the years since then.  I’ve met three of them.

DV: Was Tony DiMaria the last family member to run it?

DV: Were you in the barbecue business before you worked here?

JDB: No. I just cooked barbecue at home.

DV: What do you smoke with here?

DV: You have the gravy sauce, but you also serve this vinegar-based sauce.

JDB: This is the hot sauce.

DV: What is it? Red pepper and vinegar?

JDB: Among other things.

DV: It looks like something you’d get in eastern South Carolina. Is this an old DiMaria recipe sauce?

JDB: They’ve been using this sauce for years and years. Back when they just boiled the meat it was pretty bland, but it was open to accept flavors. So they had a sweet, hot, and tangy sauce that you could flavor it up.

DV: Are there items that you’re meant to use the hot sauce on, and others that are meant for gravy?

JDB: They’re interchangeable. The people who’ve been coming here for years get the signature menu item. It’s called “The Order.” It is ½ lb of chopped beef, pickles, onions, jalapenos, and all the bread you want. What they do is fold the beef in the bread and dip it into the gravy. Some guys like to saturate the chopped beef with the sauce first. It’s like a French dip, but with chopped beef and white bread.

JDB: No buns. Just white bread that’s delivered here three times a week. It keeps the bread fresh, but after you dip it in that gravy the freshness of the bread is kind of insignificant.

DV: Who makes the gravy?

DV: Is there a specific recipe, or do you just keep adding a little of this and some of that?

JDB: There’s a specific process I go through to make it. I think the key is to have a predictable product.

DV: And if the gravy is no good, then it’s your fault?

DV: Does that boiling vat of gravy ever truly get emptied out, or is it just cumulative?

DV: Do you make a fresh batch of broth every day?

JDB: No. We scoop it out and refrigerator overnight. When I come back in I put it back in the vat and fire it up.

DV: Theoretically, there could be remnants of one hundred year old gravy in there?

JDB: Theoretically, sure, but I burned a batch back two weeks ago so I had to start from scratch.