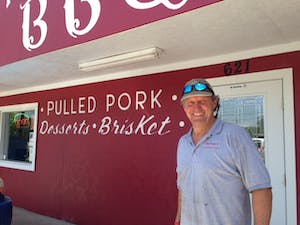 No sooner had we put the original Hatfield’s BBQ in the Top 50, than a disagreement between partners meant he was out of the business. We wrote about the controversy while Kenny was still between the old and new joint. I went down to Rockport and interviewed Kenny three weeks ago inside his newly minted Hatfield’s BBQ joint on Market St. I was in town to try the old and new Hatfield’s BBQ joints head to head, but that didn’t quite work out. His previous place had changed their name to Blackjacks BBQ & Beer Garden and had cut their barbecue hours to evening only. Now there is only one Hatfield’s BBQ in Rockport, Texas, and as the sign says, it’s the Real McCoy.

Daniel Vaughn: We’re here in the middle of your brand new restaurant. You made the Top 50 back in the June issue of Texas Monthly, but when did this place open?

DV: The name of your previous joint where the partnership dissolved was Hatfield’s BBQ & Blackjacks Beer Garden. What’s did you decide to name this one?

KH: This is Hatfield’s BBQ.

DV: Do you know if the other joint has changed their name?

KH: Yes they have. They changed it to Blackjacks BBQ & Beer Garden.

DV: That had to be a relief to see your name come off of their building.

DV: What’s it feel like to have your competition down the street housed in a building that you helped build?

KH: It’s really weird. It’s hard to describe because it took me four years to build that place. I’m torn because there was a lot of money, time, blood, sweat and tears to make it look like it does. To have to leave it was a hard thing to do.

DV: Did you know that they’ve closed for lunch now?

DV: From the crowd here it looks like the decision to leave is working out so far.

KH: Oh yes. It’s been incredible. Tuesdays and Wednesdays are supposed to be slow days, but that last two days have been incredible. We have people hanging out outside waiting for us to open.

DV: What challenges have you seen in your cooking to meet the new demand?

KH: Knowing how many briskets to put on is the biggest challenge. We’ve been averaging twelve to sixteen briskets per day. The pit has been cooking great.

DV: I saw the smoker enclosure outside with “Big Nasty” painted on it. Where did Big Nasty come from?

KH: I bought it about 4 ½ years ago then basically re-did everything on it. There are four racks in there – it’s a rotisserie pit – and it’s an all-wood burning pit. 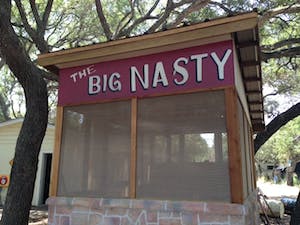 DV: What kind of wood are you burning?

DV: What is the common cooking wood around here?

KH: Oak. As long as it’s seasoned, you can’t go wrong. It doesn’t leave a bad smoke aftertaste and it doesn’t make you burp.

DV: How did you make your way to Rockport? Are you from this area?

DV: Did you learn to cook barbecue there?

KH: I started cooking when I was about twenty-five. Now, that was about twenty-eight years ago. We did the Swinney Switch wild hog cook-offs. Me, my uncle and a friend of mine would do brisket, wild hog and beans.

DV: Did you go hunt the hogs first?

DV: Was there a special recipe that you used?

DV: And add the jelly?

KH: No no. You take it out of the foil and put it back on the pit to sear it again and brown it up.

DV: I’ve seen a lot of things added to meat in competition barbecue, but peanut butter’s a new one. Maybe this interview will start a wave of peanut butter rubs.

DV: When did you come down to Rockport from Beeville?

DV: I’d imagine you had more prospective customers on a Friday then.

KH: Yes. Everybody would come. We’d have a few homeless guys who would come by and of course the dogs would come over.

DV: What were you smoking back then?

KH: We were doing everything. Brisket, chicken, ribs, some sausage and any donation food. 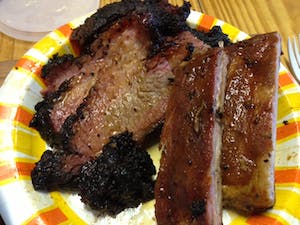 DV: So it was a bring your own meat party?

KH: Yep. Bring your meat and I’ll cook it.

DV: What finally prompted you to open up a barbecue joint?

KH: We bought the land down the road, where the other barbecue joint is now, with the idea that it would be a flooring store. This was back in 2005 and then everything tanked. We decided to utilize the asset we had by opening up a barbecue joint. My wife said “Do it.”

DV: That’s quite a pitch. Let’s open a barbecue joint instead of a flooring store. It was really that easy to convince her?

KH: People gotta eat, but they don’t have to buy flooring.

DV: It took from 2005 until just last year to complete it. That’s quite a while.

KH: It took more than four years to build the place after we decided to go for it. I would go in spurts. I would have some money, then borrow some. I did everything I could when I had some money, but there was some bad luck along the way too. We had a contractor die two days after I gave him a $7000 check. A forty-three year old guy had a heart attack and died on a Saturday morning. Crazy stuff.

DV: When did it finally open?

DV: Did you know that our Texas Monthly team was at your place just two months after you opened?

KH: No. I didn’t know who it was at the time, but Sonia Smith came in and ordered a three-meat plate. I told her she wasn’t going to have room for it. She asked what I recommended and I told her ribs, sausage and brisket. She went and ate it then came back to ask if she could talk to me.

DV: So you knew who she was at that point?

KH: Yes. I thought it was pretty neat.

DV: Did you know what to expect after that?

KH: I really didn’t expect anything. I hoped it went well, then I saw her drive back by and take some pictures. I thought that was a good sign.

DV: How did you hear the news that you were in the Top 50?

KH: There was what I thought was a barbecue issue and I wasn’t in it. I thought it was really weird because she interviewed me. I thought there’d at least be a mention, so I emailed her. She said there was another issue coming out and told me to look for it. When the next issue came out it was awesome.

DV: Who told you when the list actually came out?

KH: I think it was my wife. She was keeping tabs on that stuff.

DV: It was big local story when it was announced. I saw you on the news and multiple stories in the paper. How did that feel?

KH: It was incredible. We made it on the front page of the Corpus Christi Caller Times. It was pretty wild. On top of that I then had to move from the other location.

KH: We pulled all of our equipment and the smoker out of the old place the Sunday night that I agreed to leave there. We were in here on Monday morning working on this place.

DV: How did you find this building?

KH: A friend of mine saw it in an ad. The owner of this property had eaten at the old place and liked it. He was excited at the idea of having a restaurant instead of a bar as a tenant.

DV: I saw earlier that you’re not only cooking meat today, but also doing some work around the grounds. What’s going on out back?

KH: I had some mulch to spread. We also built a small deck and some French doors out back. We want to build a stage and have good music. It’ll be a neat little deal.

DV: You have a business outside of the barbecue joint, but barbecue has a way of consuming people. Is it tough to wear those different hats?

KH: It’s long hours. We get the day going here, then I head over to the flooring store. I have a guy answering phones and keeping things in order over there. I spend most of my time over here.

DV: You told me earlier that you have some help on the way. Tell me about the new guy who’s coming?

KH: Tom Samples* is a great chef. He’s been all up and down the coasts doing different foods. He’s arriving today. Tomorrow we’ll help him move into his house. When he comes in I want to do some little twists. We’ll always have the barbecue, but also have a chef’s night doing some different things that usual barbecue joints don’t do.

DV: So he moved down to Rockport to work here?

KH: Yes. He moved from Dallas. I’m excited. I need some help.

DV: But you didn’t have any chef help to come up with these sides or pies, right?

KH: This is a macaroni salad that a local lady makes for us. The cheesecake is made here in town too.

DV: Tell me more about this sausage.

KH: It’s made by Ron Pawelek of Pawelek’s Meat Market right around the counter from my flooring store. He makes the best sausage around. 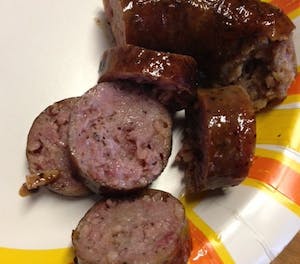 DV: Do you ever go out and eat at other barbecue joints?

KH: Oh, I love barbecue. If I go out of town, I try to find a barbecue place. The other day I was in Cotulla. There was a barbecue joint on the outside of town and I stopped for a sandwich.

DV: Did you have any favorites in this part of the state when you were growing up?

KH: Van’s in Oakville has always been a favorite. Aunt Jo’s on 77 just south of Victoria is some good barbecue too. I also like Mumphord’s in Victoria and McMillan’s in Fannin.

DV: So you’re not getting tired of barbecue?

KH: Not at all. I could eat it every day. My family is a different story. They’re sick of it.

* Kenny is referring to Thomas Mattson. He was at Hatfield’s BBQ for three days before they had a disagreement about his salary. He no longer works for Hatfield’s BBQ.