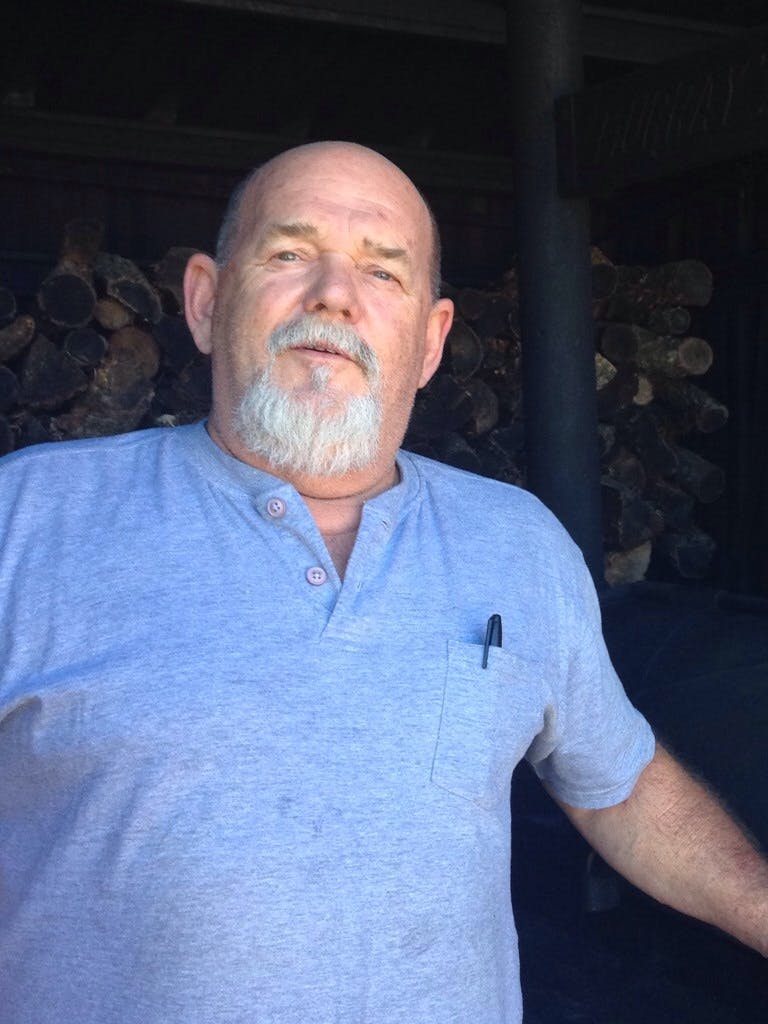 Ricky Murray handed me a chopped beef and hot link sandwich and lined up several bottles of hot sauce. He makes a good barbecue sauce, but he considers himself more a hot sauce aficionado. Before my meal and our interview ended, he was swirling together sauces to make a custom blend that he swore would go well with the last few bites of my sandwich. Ricky aims to please.

Much has changed since he opened this joint twenty-seven years ago. He no longer sells common convenience store goods and he doesn’t build hot rods in the rear garage anymore. He just cooks barbecue with wood five times a week and feeds the travelers along this route between Sulphur Springs and Paris. Unless you’re going between the two, you’d have no reason to pass by this way. I count myself lucky to have found it.

Daniel Vaughn: When did you open this place?

DV: What prompted you to open a barbecue joint?

DV: If you were cooking for yourself, you might as well cook it for some other people.

RM: Might as well. We used to do a Fourth of July part every year. It was me, my wife, her cousins, and some of our buddies. Some of these parties would last a while, maybe two or three days. When I opened this place it was a convenience store, and they all asked if I was gonna do barbecue. I said, “I think I’ll try it.” I think it worked out over time. Then the catering got really big with me.

DV: So, this building was a convenience store?

RM: Yes. I built this place. Me and an old man named W. D. Swain built this as a convenience store. There was one table, this bar and some gas pumps. Over time it got bigger and bigger in the barbecue business, and I cut the other stuff out. 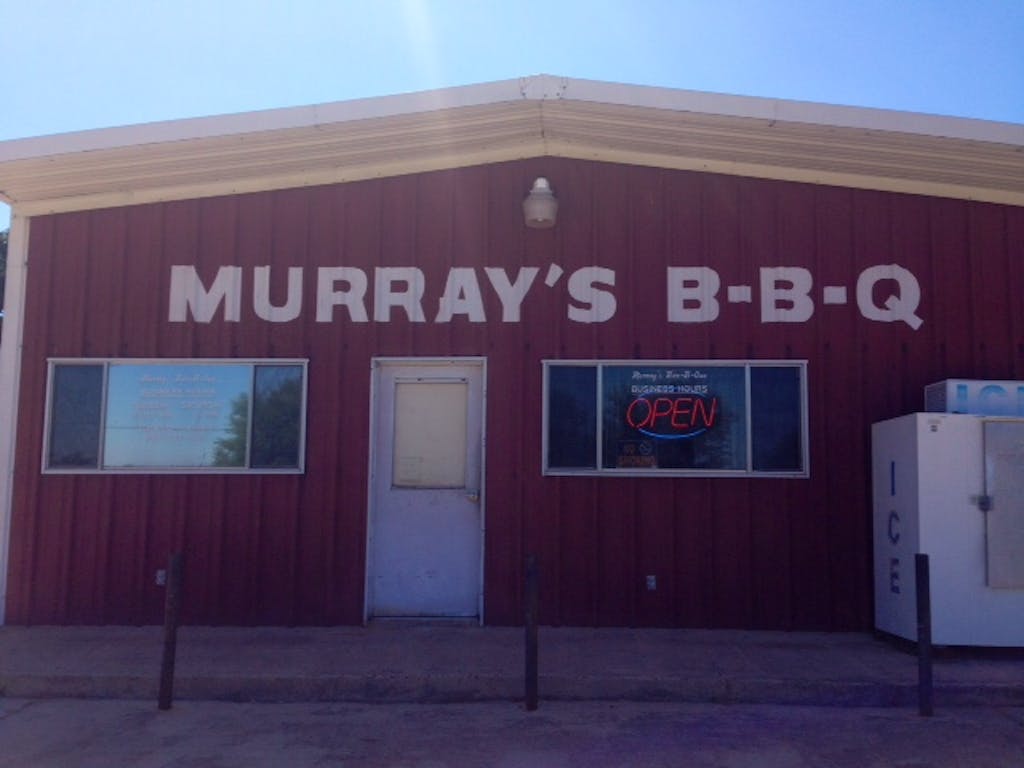 DV: What was it called then?

RM: It started out as Murray’s Store. As we got rid of the gasoline and cigarettes, then we switched over to barbecue. That’s when I went from being open seven days a week to five.

DV: Where did you learn to barbecue?

RM: My daddy always had some barbecue in that crock pot. On these Fourth of July barbecues we’d do ribs, sausage, and turkey. They were easy to do, but brisket was tough. I struggled with the brisket to get it where I wanted it. I wanted it tender. A guy that I worked with said “I got a pit down there in my shop that I never did finish. Let’s see if we can get this thing going.” Well, we did. With me being a welder by trade, I finished the pit. I cooked a few briskets on it, and I liked it, so I built another one. Then I made four or five of them. I kept two to cook here. I’m one of the few around here that cooks with all wood. I don’t use the rotisseries or any gas.

DV: What were you doing before you opened Murray’s?

RM: I was fabricating and installing dairy equipment. I’d find these little old spots like mine to eat when I was traveling around.

DV: Do you remember any favorites?

RM: Oh, there all gone now, but Bartley’s in Sulphur Springs was one of my favorites. I lived in the southern part of Dallas County, and my wife and I would go to a place called Gaylen’s. Red Coleman’s was right in the back of my mother’s house.

DV: Did you grow up in Dallas?

RM: I was born in Dallas. My mom was from Cumby. My father was from over here in Sulphur Bluff. We moved back to Sulphur Bluff and I met a girl.

DV: When did you make your way here to Cooper?

RM: In the seventh grade I made my way over here.

DV: You’re a bit out of the way here. How was the location chosen when you opened?

RM: I already owned the property. There wasn’t anything on the highway between Paris and Sulphur Springs.

DV: Is there now?

RM: Not really. In Birthright you can get a hot dog, but I’m pretty much it. I get good business from both towns. 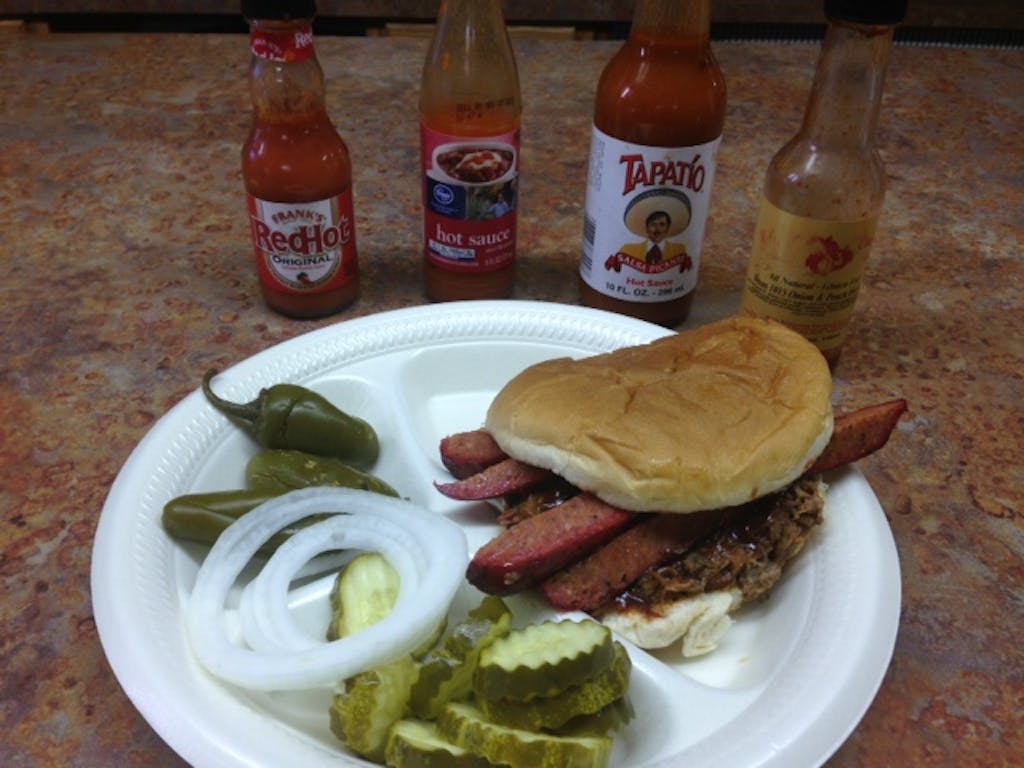 DV: I’m guessing the lunch hour is the busy time of day?

RM: Just the people coming in and socializing. We get local businessman, pipeline people, farmers, and everybody else.

DV: Do you eat at many other barbecue joints?

RM: No. I don’t eat much barbecue. I’ll eat it at somebody’s house every once in a while, but if I’m gonna eat barbecue, then I wanna eat my own barbecue.

DV: Do people act self conscious about the barbecue they make for you?

RM: They kinda do, but I always comment on it. There’s a lot of good backyard barbecuers out there.

DV: It can sometimes taste better just because you didn’t have to cook it.

RM: It always tastes better when you’re out and away from it. Even at catering events. I think it’s good that the public sees you eating some of your own barbecue. 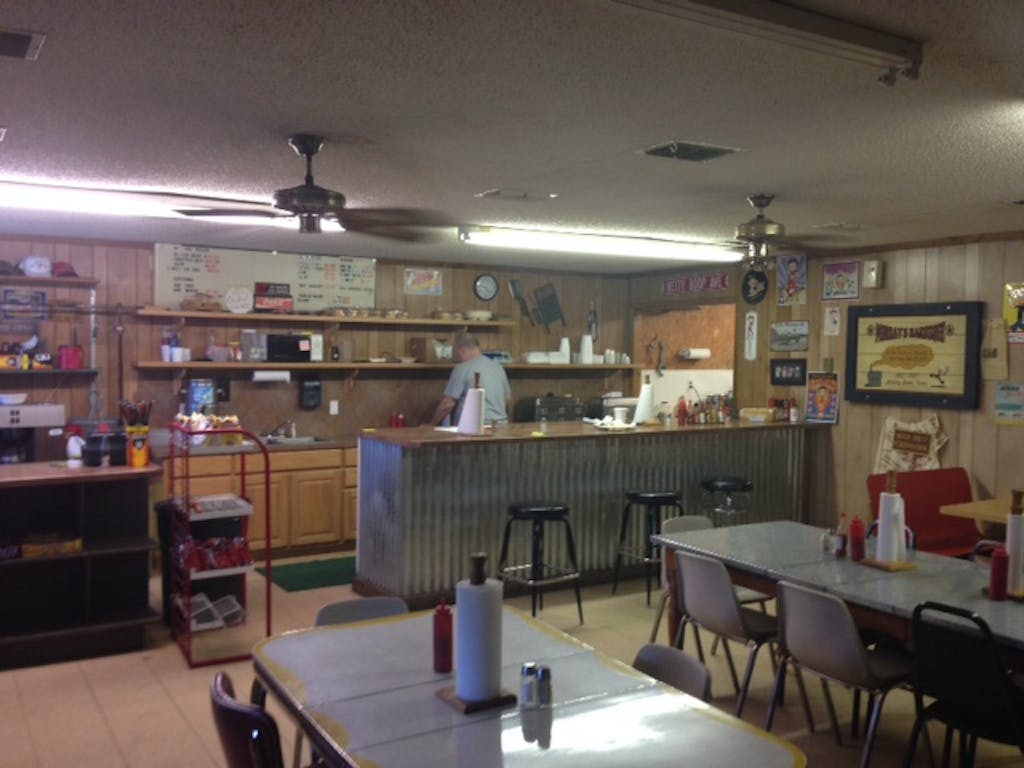 DV: How often do you eat your own barbecue?

RM: I’m a fatty end sliced beef guy. I like it where the flavor is. I’m a hot link connoisseur too.

RM: Oh yeah. She likes the fatty end too.

DV: Does she work with you here?

RM: Yes. She’s a retired and rehired teacher. She works a half day. She’ll help me do catering, and she works here every Saturday. During the week I’ve got a part time lady that helps me. She’s been here with me for ten or eleven years.

RM: A lot of people refer to East Texas barbecue as those Pittsburg hot links in Pittsburg, Texas. I really don’t care for those hot links too much. I’ll do the boudin sausage. That grease goes a long way.

DV: What kind of wood do you smoke with?

RM: Hickory if I can get it and pecan. If I need to touch up something and get a light smoke on it, I’ll throw some pecan on there, but my base is hickory. Red oak is a good wood too, but it doesn’t come by here often. Hickory and pecan are the basic Texas barbecue woods.

DV: Especially in this area. Down in the Austin area, it’s all about the post oak.

RM: Well, we’re in Hickory Grove, Texas. We’re officially in Cooper in Delta County, but this is Hickory Grove. There’s an old cemetery and the old school used to be behind me back here. The old Dallas Highway runs right behind my building here.

DV: How does your menu differ now from when you first opened in 1987?

RM: Not much difference. You’ll notice that pork ribs are not on my menu. This is beef country. Pork ribs is a once a week delicacy out here. They don’t want to eat them every day. They want to eat the beef, and they haven’t even cried about this new price we got. 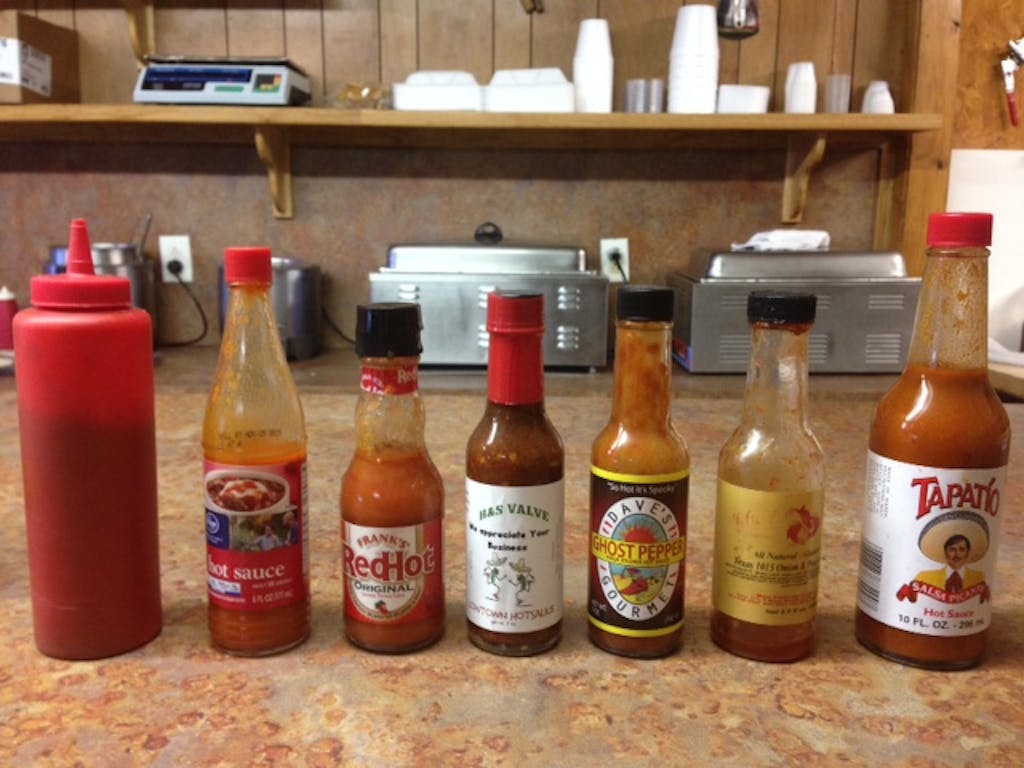 DV: What kind of brisket do you use?

RM: I use Excel Select or better and IBP Choice or higher. It’s a better grade of brisket. It cuts out better. I don’t have to trim so much. Select is what you get at the grocery store. You get whatever they throw at you. It can dry out on you. What I use all depends on what it will be used for.

DV: What are you paying for raw briskets these days?

DV: You told me earlier that you’re considering retirement.

DV: What would you do with all your time?

DV: Then you’d come home and cook some barbecue in the backyard?

RM: I don’t know man. I’ve been playing around on a wok. It’s pretty cool.

DV: Some stir fry would be a good way to use up some leftover barbecue.

RM: I like stir fry, but I hadn’t thought about that. I guess it’s cause I don’t have a whole lot of barbecue left over.

DV: How many briskets do you cook?

RM: Ten or twelve a day.

DV: Do you ever do beef ribs?

RM: I’ve tried, but you don’t see a whole lot of beef ribs in these parts. They’re hard to get.

DV: I was driving up and down the interstate today, and it seems like the chains are taking over East Texas.

RM: Soulman’s has covered up that highway with billboards. Those guys just do what they need to do. We’re all in this to make a living.

DV: Is there anyone in the family looking to take over Murray’s BBQ?

RM: All my kids worked for me, and they’re kinda burned out on barbecue. It’s just me and the wife and one more lady here. It’s time for me to step down and let some new blood get in here and take it over. I think that’d be good for the business. 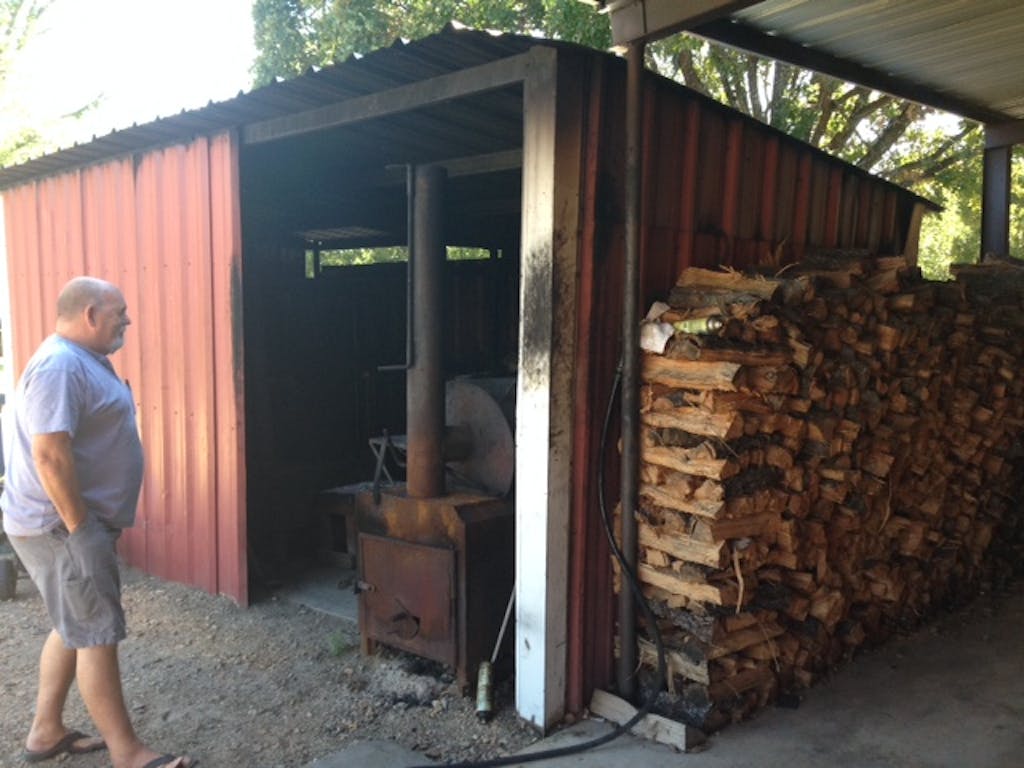 DV: Any words of wisdom for anyone opening their own barbecue joint?

RM: I got lots of words of wisdom [laughing].

RM: It’s not bad. I’ve made a good living off of it. I don’t have too many heartaches.

DV: You don’t have to have a second job, right?

DV: That’s a good thing. Barbecue is hard enough as it is.

RM: Yeah. It’s like hauling hay. It’s out there if you wanna go get it.