Rummaging through your family genealogy can be dicey. The history could be upsetting (just ask Ben Affleck), but you also might be able to confirm some royal bloodlines. And for Austin’s John Lewis Jr., what he and his father discovered was even more rewarding than any monarch. The man who built Austin’s La Barbecue into a nationally respected joint might be a self-taught pitmaster, but he has barbecue in his blood.

Lewis Jr. is still part of the La Barbecue clan, but now he spends most of his time in South Carolina. After testing the waters with several pop-ups and collaborations, the next step was to do the unthinkable—he decided to bring Texas beef barbecue into pork country, so Lewis Barbecue (opening later this year in Charleston) was born. That story bears some resemblance to the path his great-great-great grandfather Henry E. Brubaker took when he brought barbecue to southeast New Mexico over a century ago.

In 1908, the City Market in Alamogordo, New Mexico ran an advertisement for meats, poultry, fruits, vegetables, and “Barbecued Meats.” Before taking over City Meat Market in 1905, proprietor H. E. Brubaker, had followed the railroad down from Indiana. Just before the turn of the twentieth century, the Brubakers settled in La Luz, New Mexico at the base of the Sacramento Mountains. There, Henry kept hogs and cattle on a ranch until moving to Alamogordo.

That information came from the considerable research of John Lewis Sr., who has collected records on many branches of his family tree. I, however, dug in the opposite direction and found an unexpected connection between the City Meat Market and the famous lawman Pat Garrett.

The City Meat Market was established as early as 1902 by Oliver Lee, who supplied the market with beef from his ranch. Alamogordo, a book about the history of the area, noted: “At its height, the crown jewel of the southern New Mexico cattle industry was Oliver M. Lee’s Circle Cross Ranch.” Lee reportedly sold the market to Brubaker in order to focus on ranching.

He eventually become a respected rancher (there’s even a state park named in his honor), but when Lee made a business deal with Brubaker he was less than a decade removed from a high-profile pursuit by Sheriff Pat Garrett, the man responsible for killing Billy the Kid. In 1896, that part of New Mexico was still very much the “Wild West,” and when Albert Jennings Fountain, an accomplished attorney who once represented Billy the Kid, disappeared along with his eight-year-old son near White Sands, Lee was the prime suspect. But without a body he was acquitted of the murder. Some even believe he was involved in Garrett’s killing in 1908, just a few months before Brubaker ran that ad for barbecue in the newspaper.

Regardless of the founder’s reputation, the Brubakers took the market to new heights. It wasn’t without a rocky start, though. Henry’s sons, Jesse and Claude, were in the meat business with their father, and the first year in Jesse had a serious accident. According to newspaper reports at the time, his right leg was caught in a sausage mill. His coworkers were able to free him before he lost it completely, and he eventually returned to the business. 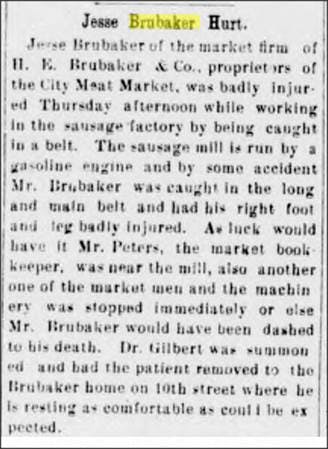 The Brubakers moved the market to a larger building in 1909, then added a second location in nearby Cloudcroft. By 1920, Jesse was out of the meat business and working as a forest ranger. His father, widowed and retired, was living with his daughter Carrie in El Paso by 1930. Claude was still listed as a retail butcher in the 1940 census, but John Lewis Sr. wasn’t sure when either of the family’s meat markets closed for good.

John Lewis Sr.’s mother, Cora Lewis (née Brubaker), did not inherent her father Jesse’s affinity for butchery. When John Lewis Sr. was just a year old, he and his parents moved from Michigan back to El Paso where his father, Lloyd, became a fireman. The family’s connection to butchery and barbecue were officially suspended, and John Lewis Sr. continued the streak by working for IBM.

Now that John Lewis Jr. is an accomplished pitmaster, Senior was happy to share the family’s barbecue roots with Junior, but the return to the family business didn’t really surprise dear old dad. “When [John Jr.] was ten or eleven we started going on these backpack trips with the Boy Scouts, and he learned how to cook over an open fire,” Lewis Sr. told me. Junior took to the task quickly according to his father. “He got so good, the adults would bring food and let him cook it for us.”

“I was excited because I now know that I have barbecue history in my family,” Lewis Jr. said. The barbecue thread may have skipped a few generations, but it’s now stronger than ever. In addition to Lewis Jr.’s role as a pitmaster, he also has a passion for pit building. Earlier this year, that resulted in the opening of Austin Smokeworks, where father and son work side by side building smokers out of 500 and 1,000 steel tanks. Their signature is a stylized meat cleaver handle used to control the exhaust dampers, the handles modeled after a meat cleaver that once belonged to Henry Brubaker, the perfect finishing touch on John Lewis Jr.’s new smoker that’s bound for South Carolina.