Juicy Pig, which opened in Denton nearly a year ago, brought together local restaurateur Ken Currin and Pam Chittenden, who was known for her roving dining events called PamFood. Chittenden was new to barbecue, but took to the pits according to early reports about Juicy Pig. She has since left the restaurant, but Chittenden left her stamp on the menu, which is far more adventurous than at most barbecue joints.

Smoked jackfruit is the new vegetarian barbecue craze. They say it “tastes just like pulled pork!” It doesn’t, but the smoked strands of this monster fruit do make for a satisfying sandwich. Unlike that “vegan brisket” in Dallas, there’s no attempt to brand it as anything other than what it is: a smoked jackfruit sandwich. I’d venture that there are some onions and garlic in there too (nobody knew at the restaurant during either of two visits), and plenty of spice. A simple white bun carries the pile, which is more of a protein-free sloppy joe than pulled pork. I’d spend money on it again, maybe as a side item to split, but then there are so many other sides to choose from. 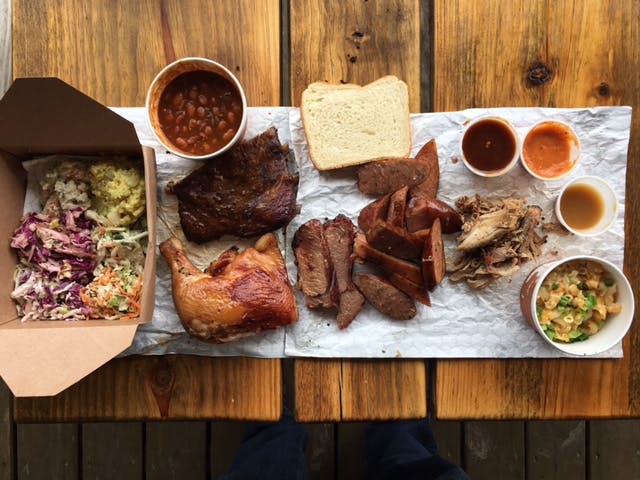 Mayo-lovers take note that all three slaw options have a little in there. The No. 3, with red and green cabbage is the most traditional. All of them have a good crunch. A spicy version tastes like an attempt at a North Carolina-style slaw without the finely diced cabbage, while the JP with cilantro is the most unique. I liked the No. 3 especially well on a pulled pork sandwich with habanero sausage. The three-component sandwich was one of their best items. It has a name I can’t remember that has absolutely nothing to do with its contents. That’s the way most of the specials are on the paper taped down to the counter, turning a simple transaction into a necessary interrogation. Who knows what a Mojica sandwich is without some accompanying description? 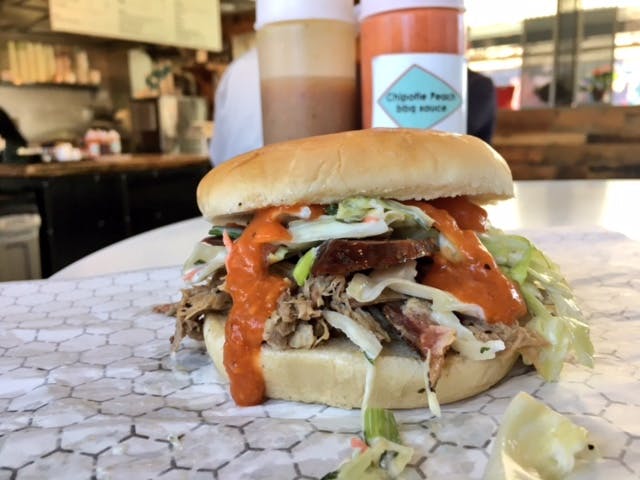 Of course there are also three sauces, all of which are fruit-based. Chipotle peach goes especially well with the pork. The Carolina vinegar sauce got lost in an orchard on its way to Texas and picked up a bunch of green apples. The original sauce used to be heavy on the tamarind, but Dentonites demanded a more “normal” sauce according to Eric, who was working the counter. What they got was a serviceable brown sugar sauce. 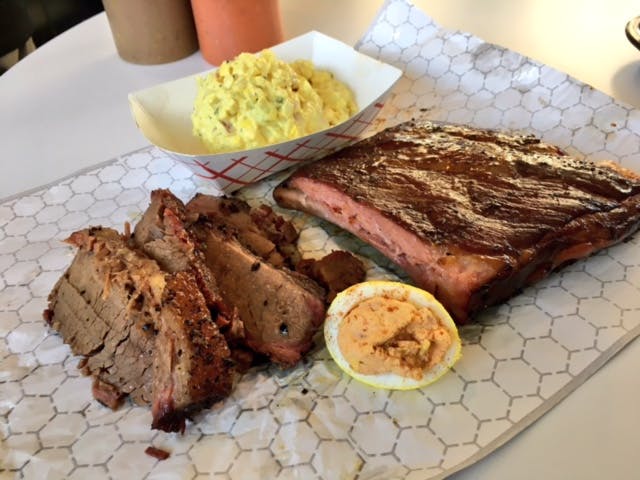 None of the sauces did much to help the ribs. A third of a rack of St. Louis ribs come to an order. It’s uncut and thoroughly overcooked, making it a DIY version of pulled pork, but there’s a moderate smokiness and the rib meat is salty enough. The brisket is about the same. They cook it fat side down, I guess to be different, but it doesn’t much matter when most of the cooking is done in a foil wrap. The result is tender roast beef better suited for a sandwich. The only saving grace on the platter was a garnish of an excellent deviled pickled egg. The early word on the Juicy Pig has been lukewarm, and I gather the staples of brisket and ribs have something to do with that. Skip them. There’s plenty more to choose from.

The smoked sausage is better than average on its own, and makes a great sandwich. The habanero version was my favorite, and it provided some stunning heat to a gumbo special. The chicken and sausage gumbo is served with a scoop of creamy potato salad, which might sound crazy, but it works. I ate the leftovers for dinner.

The desserts, temptingly displayed at the counter, and are hard to pass up. Don’t. A Guinness chocolate cake was dense, moist, and rich. There are also small pies that are still big enough for two or three, but it was the fried pies that I can’t stop thinking about. Peaches were wrapped in flaky fried dough dusted heavily with cinnamon and sugar. It was still warm at lunch, and I was sad I only ordered one.

If you enjoy variety in your barbecue menu, the Juicy Pig is your place. It’s one of the few places to give vegetarians real options (look for a black bean burger on the special board) at a barbecue joint, which reminds me to suggest the smoked mac & cheese. I applaud them for stepping outside the norm, but the meat deserves the same amount of attention as the sides. Once they get that nailed, Juicy Pig will be a Denton gem for meat-lovers and herbivores alike.