Just a year ago, Kendon and Davetta Greene began the expansion of their successful barbecue joint in DeSoto. Top 5 BBQ was in the Texas Monthly Top 50 and had just been named the best barbecue in town by the Dallas Observer. Since opening in 2015, they had outgrown their space and were readying a new location across the street from their original. They’d never have guessed then that the business would close its doors for good just eight months later.

The Greenes started construction for the expansion on July 21, 2018, and a week later, Kendon’s father and business partner had a stroke. “He had to rearrange his entire life,” Kendon said. Then Davetta’s father passed away last August, but still the couple persevered. After a successful appearance at the Texas Monthly BBQ Festival in Austin in November, they returned to DeSoto and celebrated the grand opening of the new space. Later that month, a new Oyler rotisserie smoker arrived to satisfy the anticipated influx of new customers, but business didn’t increase rapidly enough to replenish all the money they’d spent.

“We weren’t able to keep up with what we had just put in over there,” Greene admitted. They expanded too quickly, taking on too much debt. “I fought it,” he told me, but in March the Greenes announced that Top 5 BBQ was closing. Greene said he should have started looking for a job to support his family right away, but it wasn’t that easy. “Every morning I’d wake up, and all of that is gone,” he said. He would sit at home, depressed. “I was moping, man,” he admitted. “This was my passion. I really love it.”

Greene credits Davetta for helping him through the pain. “She kinda let me grieve,” he said. “But when she finally had enough, she came in with the thunder.” He needed to get over the loss of the restaurant, but they decided they weren’t quite finished with barbecue.

Kendon Greene's ribs are as good as ever.

Family friends offered help, both physical and financial. One helped pay for a trailer, another gave them a good deal on kitchen space. Jaime Cantu had helped build the original Top 5 BBQ trailer before the Greenes ever had a brick-and-mortar. He convinced them that they should work together to build a smoker for the new venture. All they needed was a location.

The Shells and Tails food truck is a popular stop outside the Grow DeSoto Market Place. They have traffic cones and instructional signs set up outside the truck to control the crowds. Greene ran into the owner, who urged him to park the new barbecue trailer, using the name KG’s Pitmaster BBQ, at the same place. KG’s now serves its barbecue for dinner Wednesday through Friday and all day Saturday.

Fans of Top 5 BBQ will find a limited menu at KG’s. Brisket, ribs, chicken, and sausage are all there, but no sides yet. Chips for the barbecue nachos are still fried fresh, and the baked potatoes stuffed with barbecue haven’t gotten any smaller. The Cantu-built smoker is parked at a commissary kitchen, and the finished barbecue is brought over to serve at the truck. Getting used to the new smoker was a challenge for Greene. “It was difficult at first. I jacked up three briskets,” he said. I sampled a half-rack of ribs during my visit. Even with a new pit, a new trailer, and a new business name, Kendon Greene has still got it. 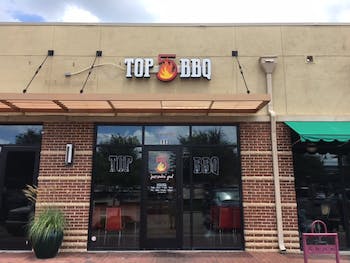 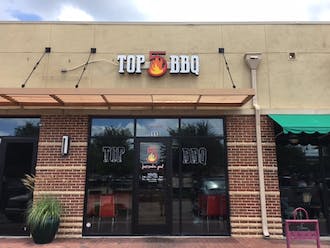