McKinney now has a barbecue truck, but it wasn’t an easy path. The suburb north of Dallas took so long to allow food trucks (they were illegal per city ordinance until last year) that the mobile food bandwagon was gone before the city had the chance to hop on. Restrictions like minimum distances between food trucks and restaurants (300 feet), and even other food trucks (1,000 feet) are still in place, which is why you might find them parked in odd locations like, say, the entrance to an RV storage facility. Or at least that’s where Local Yocal Backyard is parked.

Local Yocal is better known as a butcher shop in downtown McKinney specializing in all-natural beef. This new venture, which opened in late September, turns their raw goods into barbecue by way of a trailer-mounted Oyler smoker. I’ve grilled some excellent steaks from the butcher shop, so I was curious how they handled the smoked version when I stopped in on a gloomy Thursday for lunch. 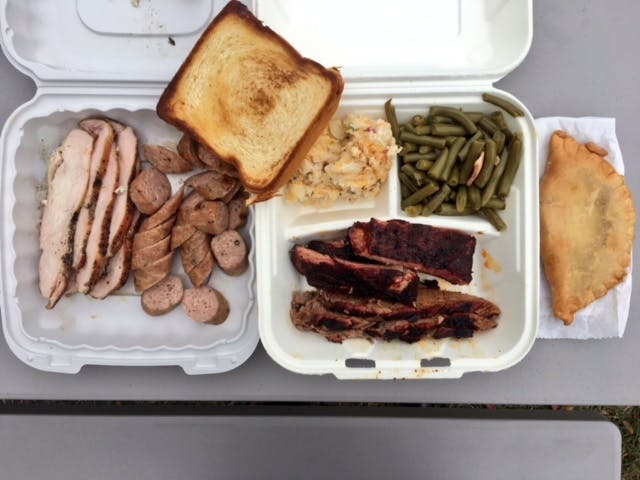 The menu includes burgers and a chicken sandwich alongside brisket and sausage. Other smoked meats—it was pork ribs and turkey when I visited—vary from day to day. I should also note that they were listed as options for the dinner menu (they stay open until eight in the evening), but had just come off the smoker at 12:30. Wanting to try all four, I added sausage and turkey to my rib and brisket combo plate. Instead of the normal quarter-pound increments, a half-pound was the minimum order here ($13 total for the sausage and turkey), so if I’d thought longer on it I would have gone with another combo plate ($15) to try a few more sides. Of the two I tried, the loaded potato salad was far better than the gussied up green beans from a can. 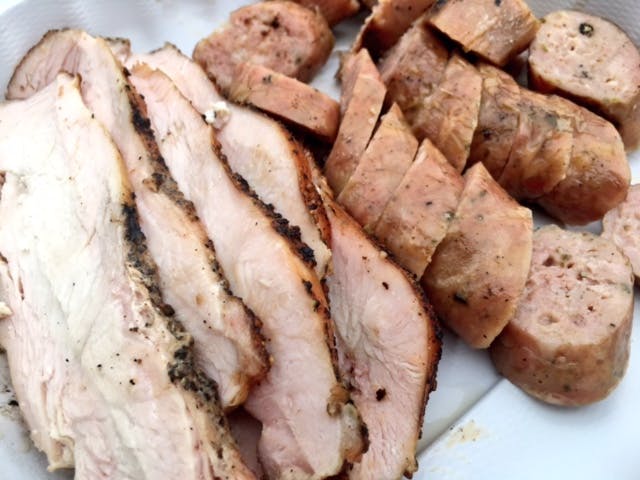 Juicy slices of smoked turkey breast were the standout of the visit. They were tender and just smoky enough with a heavy dose of black pepper in the rub. The homemade jalapeño-cheese sausage looked bland and boring in the tray. The casing didn’t have much color, and I thought the “cheese” in the description was a misprint. But the first bite erased those preconceived notions. They’re made with a white cheese, and the links were packed with plenty of jalapeño flavor and big chunks of black pepper. The nice snap of the casing only added to the great sausage. 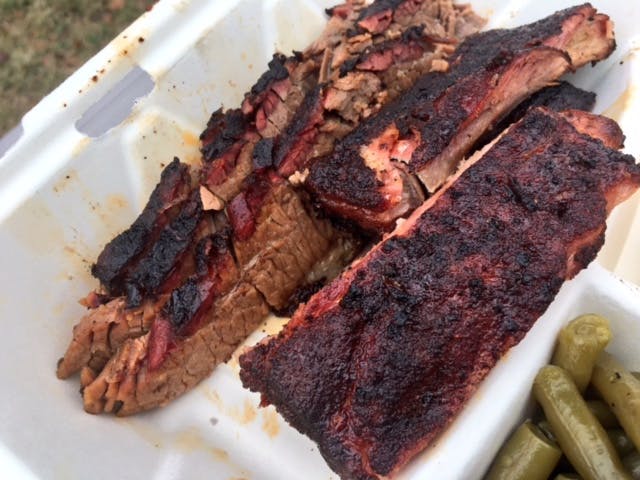 The brisket wasn’t fooling anyone. It looked overcooked, and the slices crumbled apart as I tried to pick them up. The level of smokiness gave it potential, but it took fourth place out of four meats on the day. Hefty St. Louis cut ribs had a great bark and just enough rub. The meat came away easily from the bone, but they weren’t falling apart. The only knock was that they were a tad dry, but I’d gladly order them again.

Dessert is an array of fried pies from a local bakery. I enjoyed the caramel apple version, and I saved the chocolate and pumpkin pies for the next visit. I’ll be back because it’s a promising new barbecue business from folks who have a lot more experience with the raw stuff. With a few tweaks it could be destination-worthy, even for folks not looking into RV storage.