Early retirement is the dream of many who work in the world of finance. Matt Pittman managed it at age 43, but it wasn’t thanks to any fat-cat clients or boardroom deal-making. Pittman built a barbecue rub business, Meat Church BBQ, out of a last-place finish on a televised barbecue competition. When the company launched in 2014, he ran it out of his house in Waxahachie. Four years later, Meat Church had surpassed one million dollars in total sales.

So Pittman threw himself a retirement party in February, signaling his departure from corporate life. In April, he opened a retail store, Meat Church BBQ Supply, in downtown Waxahachie. “I’ve never had less than a 45-minute commute since I’ve been sixteen years old,” Pittman said inside his storefront, which is just a mile and a half from his home. He does most of his cooking in a fully equipped outdoor kitchen in his backyard, where he also hosts barbecue classes with famous pitmasters from across the country. The latest, with Malcolm Reed of How to BBQ Right, brought students from sixteen states, Canada, and Italy to learn competition-style barbecue.

Pittman first made a name for himself on the TV show BBQ Pitmasters. Then in its sixth season, the show selected Texans to duke it out in its “Lone Star Smoke War” episode in April 2014. Pittman and his brother Josh finished last, losing to Junior Urias (of Midland’s Up in Smoke BBQ) and JD Davismeyer. But as the episode aired, Pittman’s Meat Church website was live—selling two rubs, plus Meat Church shirts and hats. Orders for the rubs, Holy Cow and Honey Hog BBQ, started coming in and didn’t stop. They’re still his top sellers.

I’d met Pittman the year before. I was in the Fort Worth area on a barbecue research tour, and I picked him up at his office so he could tag along. At that point, he had done plenty of tailgate cooking for Cowboys games but hadn’t really jumped into competition barbecue. We split a monstrous Jambo Texan sandwich at Jambo’s BBQ Shack in Rendon and met then-owner Jamie Geer. A few months later, Pittman bought a Geer-designed Jambo offset smoker, painted a Meat Church logo on it, and filmed a try-out video for BBQ Pitmasters.

Despite its cringe-worthy moments (“When you have my barbecue, it’s going to be like having a religious experience in your mouth”), Pittman’s video did the trick, and the show’s producers added him to the lineup. Pittman met with Geer for advice on competition rubs, and Geer connected Pittman to his co-packer. Pittman had entered a few competitions using a straight salt-and-pepper rub on his briskets. Geer suggested he use some garlic, then introduced him to honey powder. Soon those first two rubs were formulated and ready for the small screen.

Pittman didn’t expect much from the show, given his so-so performance. Brisket flats and Vegas strip steak were the two meats all the contestants were judged on. Of the latter, Pittman said “I’d never seen it before, and I’ve never seen it after.” As for the brisket flat, he said, “We don’t cook that,” referring to Texans. Judging by my own barbecue travels, I agree. In Texas, we smoke whole briskets.

He became a minor celebrity at the office. There was no dress code, so more than a few Meat Church T-shirts were worn in company meetings. “We had the name, and that’s all we had,” Pittman said. It’s a good name. He credits its genesis to a tweet from Alice Laussade, the CEO of Meat Fight, a Dallas charity known for barbecue events. During a Sunday lunch at Slow Bone in Dallas she used the hashtag #meatchurch, and it stuck with Pittman. Laussade gave her blessing to him to run with it.

Within a year of the show, Pittman’s side business was making real money. Online sales were strong, and USPS boxes and bags were cluttering his house. Buc-ee’s started carrying the rubs on its shelves, and Pittman expanded the lineup. Now he sells thirteen different rubs and seasonings, as well as twenty different hats and fifteen shirt designs. “I always had this vision I’d create a T-shirt company and sell funny T-shirts online,” Pittman said. He’s reached that goal and then some.

The new Meat Church Supply, which is run by Pittman and his son Christian, carries seemingly anything an aspiring backyard pitmaster could need. He carries a line of Traeger smokers. The company outbid Big Green Egg (Pittman’s former favorite grill) to have Pittman as an exclusive spokesman for the brand. He’s also an ambassador for Yeti and has a full display of its coolers and equipment. There’s wood, charcoal, sauces, and of course rubs. A freezer full of meat sits at the back of the store, just in case the owner of a new smoker doesn’t want to spend time at the grocery store on the way home.

An online customer from Kansas City recently asked Pittman an unusual question. “He had bought a ‘Brisket Commander’ shirt,” Pittman recalls. “He asked, ‘How do you get your shirts to smell like barbecue?’” Pittman laughed because the smell came along with the building. Walking through the front door, the smell of wood smoke hits you in the same way the Cinnabon aroma fills an airport terminal. It’s all thanks to his neighbor, The Vault Smokehouse, which already occupied the unit next door when Meat Church BBQ Supply opened. Asked if he’d ever enter the restaurant business himself, Pittman quickly responded, “I’m not gonna build a restaurant. Why would I?”

Pittman’s followers enjoy the ecclesiastical connotations in the name. A hat featuring a stained-glass window was his hottest seller, and students at his Sunday classes are always giddy about attending Meat Church on a day that seems proper. Pittman grew up Southern Baptist, and I wondered if anyone in his church or community took issue with the potentially sacrilegious name. “Nope. Just my grandparents,” he said with a smile. “It’s edgy. I think you can have one foot over the line, but not two.” He easily recalls the moment he knew he was fully comfortable with the name. At a barbecue event, a priest (or at least a man dressed as a priest) walked past Pittman’s booth. The man stopped and pointed to the sign. Pittman braced for the worst, but the man said, “That’s a church I can get behind,” and kept walking. 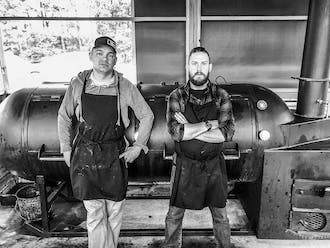 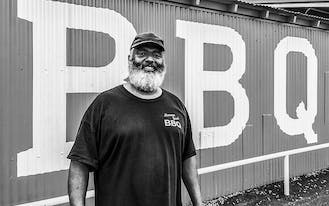