Travis Mayes, the pitmaster at Meshack’s, poked his head out through the side door to ask when he’d get his fifth star. He knows the power that his barbecue has over the locals, and he was feeling his oats today. No wonder with all of the accolades, long lines, and calls from the Food Network, who are planning a shoot in the near future. Even with that success in this far corner of Garland, the Mayes family is looking toward Dallas, more specifically East Dallas, to find the right place for a new location that is more easily accessible to the larger Dallas population. They also yearn for a place with interior seating, since on a chilly day like this one I had to bid my regards to eat in my normal spot, shielded from the wind in the driver’s seat. 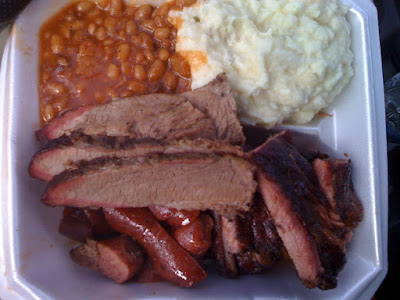 The quality of the sausage wasn’t noteworthy on previous visits, but the flavors that have been highlighted in these Smoky Denmark links by the deft hand of the pitmaster was amazing. I’ve eaten many versions of these name-brand hot links but never have they been so perfectly crisp and juicy at the same time. They even seemed to have a bit more kick than usual. What was lacking was the normal Meshack’s brisket. While these slices from the lean end looked exemplary, they were missing the signature smokiness and nicely rendered fat that I’m used to here. The meat was plenty tender and moist, but only a few choice bites, thick with crust from the narrow end of each slice, released that pecan smoke flavor. 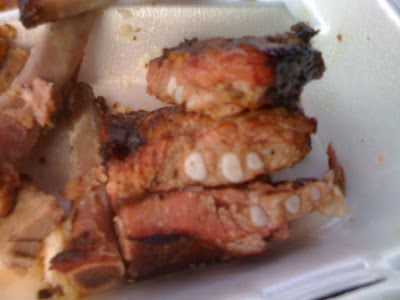 A hearty and pleasantly chewy bark on the ribs held loads of flavor. The fat had melted into the meat for a lusciously moist texture, and the seasoning and smoke had melded together to form an excellent collection of ribs and tips. Given the frequency of my barbecue meals, there is seldom a time where I’m a member of the clean plate club anymore. However, on this day, every bite was consumed.

Since my first positive review, the Mayes’s have always shown their gratitude for my coverage whenever I stop by. There’s no family I’d rather validate with a fifth star than this one, but I know Travis wouldn’t want me to just give it to him. Given the perfectly smoked ribs and tantalizing sausage, the brisket just needs a slight improvement for that coveted additional star. Since I’ve eaten far better brisket on several occasions here, I know Travis has it in him, and it will just be a matter of time before I find smoked meat perfection at Meshack’s.