I’d like to be able to say more about Mesquite Wood Bar-B-Q, but the items available from the smoker the day I stopped in didn’t allow for it. I stood perusing the menu on the small porch at the ordering window that faces Drake Street. A few blocks south the county road disappeared into the foothills. The smell of smoke surrounding the place was unmistakable. 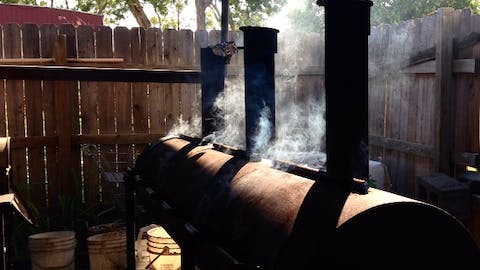 Iraan is out there. It sits a ways off I-10 somewhere between Sonora and Fort Stockton. I was about ninety miles into a five hundred mile loop that would take me back to Odessa, via Marfa, by evening. It was opening time, and a woman greeted me at the window. I asked for a little of everything, but they were behind. Ribs and chicken were still on the grill. “When will they be ready?” I asked. “Noon,” was the response without a hint of contrition. With two other time-sensitive stops ahead, I couldn’t just kill ninety minutes waiting on ribs. Brisket and sausage would have to do. 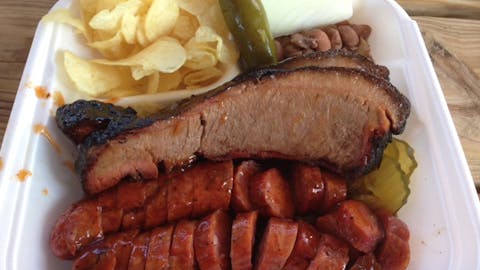 I sampled the sausage first while sitting at one of several picnic tables available for outdoor seating. It tasted familiar, and the owner confirmed that it was Slovacek’s. They add a good bit of smoke to the sausage here, and heap plenty of it on every order. Each combo also comes with flavorless pinto beans and Lay’s potato chips.

Knowing they smoke only with mesquite, I was braced for a harsh smokiness on the brisket that thankfully didn’t materialize. The smoke flavor was certainly bold, but so was the beefiness of the thick slices. Just two slices on my combo plate weighed in over a half pound. They were sliced so thick because the meat was overdone, and had most likely been rewarmed from the day before. The fat was nicely rendered, but the meat was dry. It was best suited for their brisket wrap, which contained another thick slice of beef along with onion, pickles, and plenty of sauce. It would’ve made a good meal on its own. 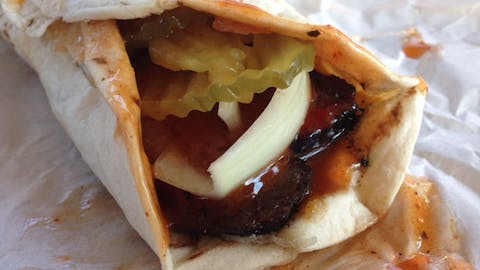 After the meal, I walked around out back. The same woman who took my order was placing raw chicken into direct-heat grill. That explained why it wouldn’t be ready for a while. They cook the ribs and chicken both directly over coals, and the ribs still had a ways to go. I guess you have to take whatever they’ve got ready when you stop in Iraan, and I was also warned to phone ahead before making a long trip. They’ll close down the storefront if they have a big catering job to attend to.

Later, I asked the owner, Nancy Beck, if I’d missed any good barbecue in the vicinity of Iraan. “There are some decent barbecue places in Midland.” It was a reminder that in West Texas, ninety miles away is considered just down the road. Beck then bragged a bit, while also revealing her understanding of the limited options that surround Mesquite Wood Bar-B-Q. “If you want it any better you’ll have to make it yourself.”