Mike Anderson Jr. runs one of the most popular barbecue lunch spots in Dallas, but when he opened it with his dad back in 1982, they really didn’t know what they’d gotten into. “We started it together the week after I got out of high school,” he told me while we sat at a booth in the dining room. It was a rare break from the cutting block for Anderson, but at 1:30 p.m., most of the customers were gone. The frenzy of office workers, hospital employees, and construction workers who form the lunch line that usually stretches out the door was over, and closing time was just an hour away.

When Anderson and his dad bought the building, it was an the old Epp’s Smokehouse. They ran it for a few years under that name to try and keep the loyal customers, but in 1985 they realized their mistake: “It didn’t have a very good reputation,” Anderson said. Thus, Mike Anderson’s Barbecue House was born. They were open for lunch and dinner back then, but times were tough. “We were lucky to survive the first few years,” Anderson said. Some days brought in just $500. “Over a ten or twelve hour day, that’s pretty sluggish.”

Once business was built up enough, Anderson turned his focus to catering and his own quality of life, something we rarely hear as a priority from pitmasters. “We had built our catering up enough that we could get some of our life back without the business suffering.” This pragmatic approach let’s Anderson have some fun in the evenings. He was planning a trip to the lake in his convertible Mustang after closing up shop. 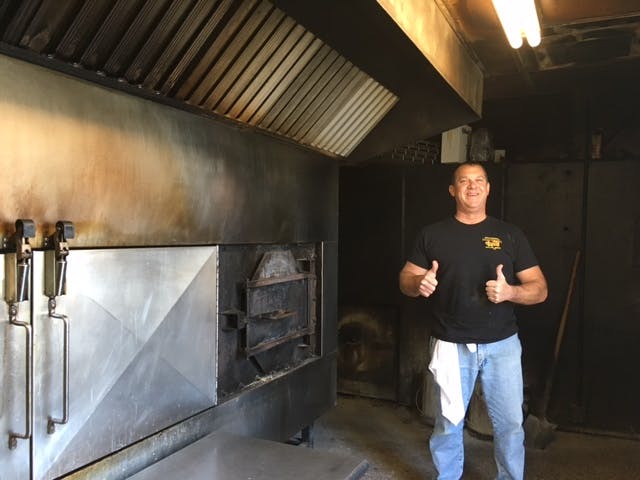 He also doesn’t need to feed wood into the pits overnight thanks to his rotisserie smokers. While an old Bewley pit (nicknamed Hades) came along with the building, Anderson uses it sparingly. He likes the Ole Hickory smokers back in the pit room. “I prefer the modern day stuff.” He still gets good smokiness on the meat from these pits thanks to his preference for fresh cut hickory wood, “The greener the better.” Green wood produces more smoke. 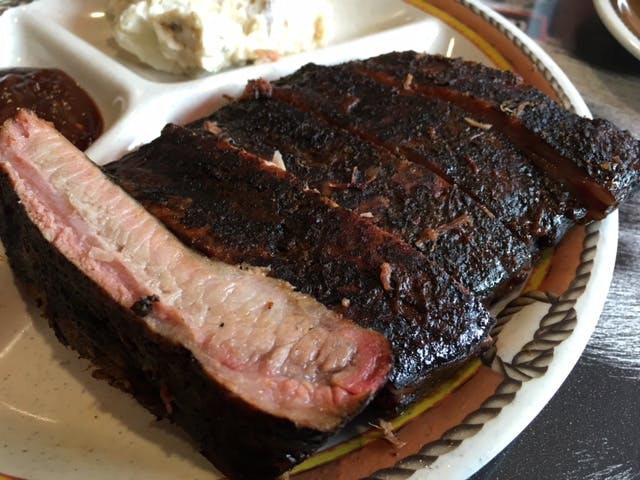 These smokers are well suited for pork ribs, a popular dish here—and for good reason. He uses two-and-three-quarter and down St. Louis ribs, which means each rack weighs less than two-and-three-quarter pounds. They’re meaty, smoky, and just a little sweet. The come off the bone nicely, and don’t need any sauce. I’d call them the highlight of the menu, while being an underrated local rib option. 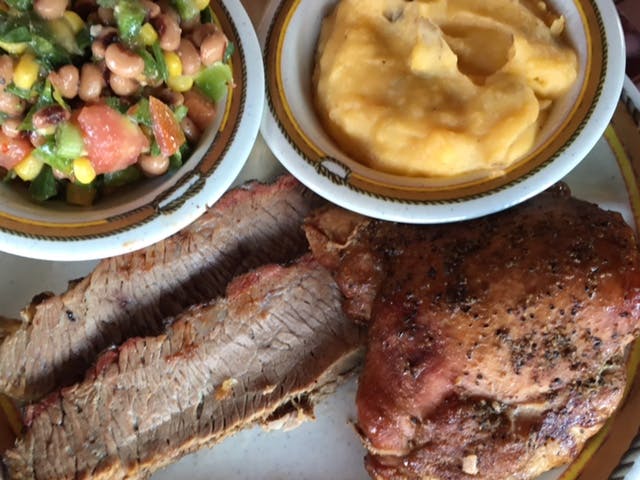 We’ll agree to disagree on the brisket. He prefers a lighter seasoning and no fat. His dad didn’t even salt his briskets. Of Central Texas-style brisket, he told me, “Those guys just beat the s*** out of the meat with salt and pepper down there. I don’t like it.” Anderson says the richness from the fat keeps people from eating it more often. I think I’d eat more of his sliced brisket if he added some salt and fat, but it’s plenty good in the chopped form. 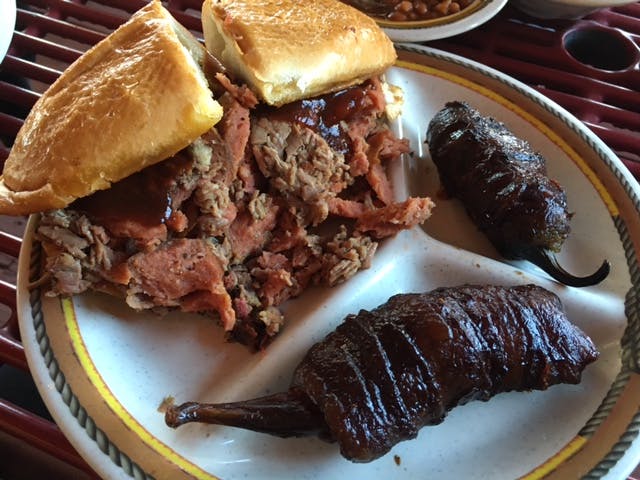 A giant potato stuffed with brisket and all the trimmings was fantastic. Starting with a fluffy potato certainly helps, and that butter pooling on the plate might have something to do with it. I also loved the two-meat po-boy. He’ll chop the sausage (Rudolph’s polish sausage or hot links from Smokey Denmark) along with the brisket if you’d like. A well seasoned boneless smoked chicken thigh was also a nice surprise. 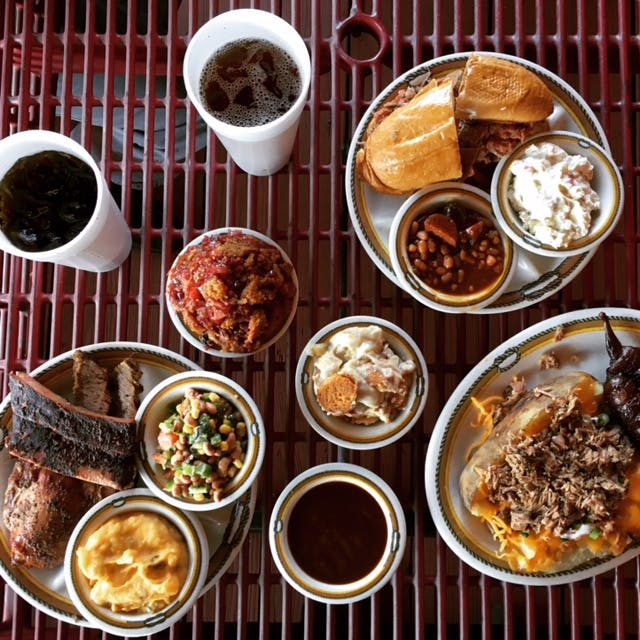 My favorite menu items are one you might not even notice. At $3 a piece you can get brisket-stuffed jalapeños wrapped in bacon, or a half quail in bacon. Get both. They look similar, but look for the tiny quail leg sticking out the top instead of the jalapeño stem if you want to tell them apart. The best part about them is the crisp bacon that surrounds the whole package. Anderson says the key to getting them crispy is freezing them after they’re wrapped. “As long as you’ve stretched your bacon properly before you wrap it, the entire product behaves in the smoker as if it’s all one thing.” A dunk into their thick, but not-too-sweet sauce is the final flourish. 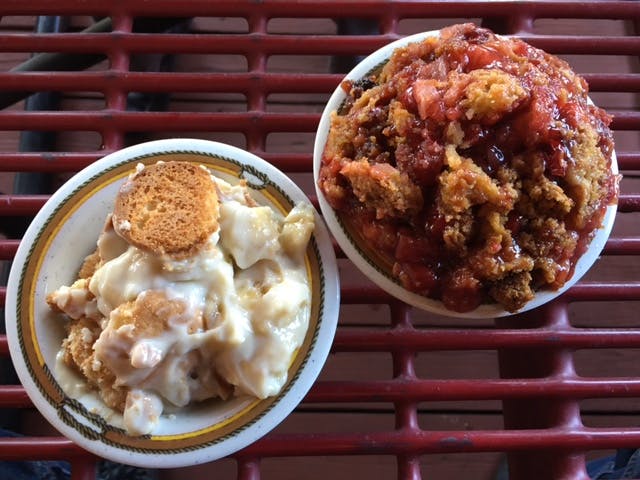 Thirteen sides, not including taters and salads, are “all fresh every day.” The set-up here will be familiar to Dallas diners who are regularly confronted with a long line of those self-service sides and soft serve at the end. Grab a tray, ask Mike what’s good today, and load up with a well-made lunch. Don’t skip the banana pudding either. 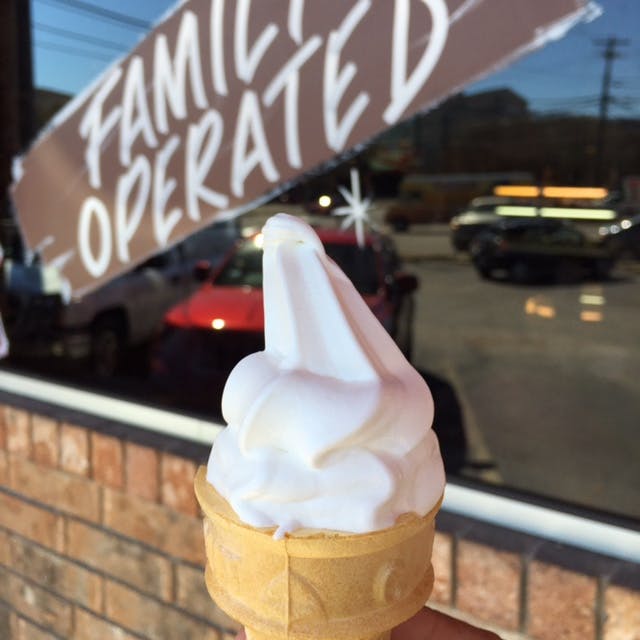 Also, don’t forget to say hello to Mike’s mother at the end of the line. Mike Sr. passed away five years ago, but 92-year-old Ruth still drives in from Allen three days a week to run the takeout register. A lot has changed at Mike Anderson’s in 34 years, but the letters painted on the window still ring true: “Family Operated.”