The transition from competition barbecue to commercial barbecue can be challenging. Restaurateurs generally have to cook more than once a week, there’s more meat to smoke, and a lot more people need to be pleased than one table of judges. In my experience, shelves full of competition trophies don’t often translate into good barbecue from the menu, which is why Pappa Charlie’s Barbeque in Houston is so remarkable. Owner Wesley Jurena doesn’t exactly have room for any trophies in his small barbecue trailer that can usually be found parked outside Jackson’s Watering Hole, but he’s had plenty of success on the competition trail. Now he’s poised for success of a different kind – restaurant success.

Jurena has been making do as Houston’s favorite barbecue vagabond, but when I visited early this week he made no bones about his search for a permanent home of the brick and mortar variety. Dealing with the limited prep and storage areas in a trailer is wearing him down, not to mention the frustration of being forced to turn his custom painted Jambo pit from a show pony into a work horse. Despite the challenges, the barbecue is some of Houston’s best, and as his popularity continues to grow, his capacity will have to as well.

This past weekend Jurena smoked only twelve briskets over three days. Based on the slices I got, that number should be higher. The meat is more peppery than smoky. It’s also juicy with a tenderness closer to a good steak than to pot roast. The fat could have been rendered a bit more, but that has more to do with his hot and fast cooking technique than his skill as a pitmaster. This was some great eating brisket. 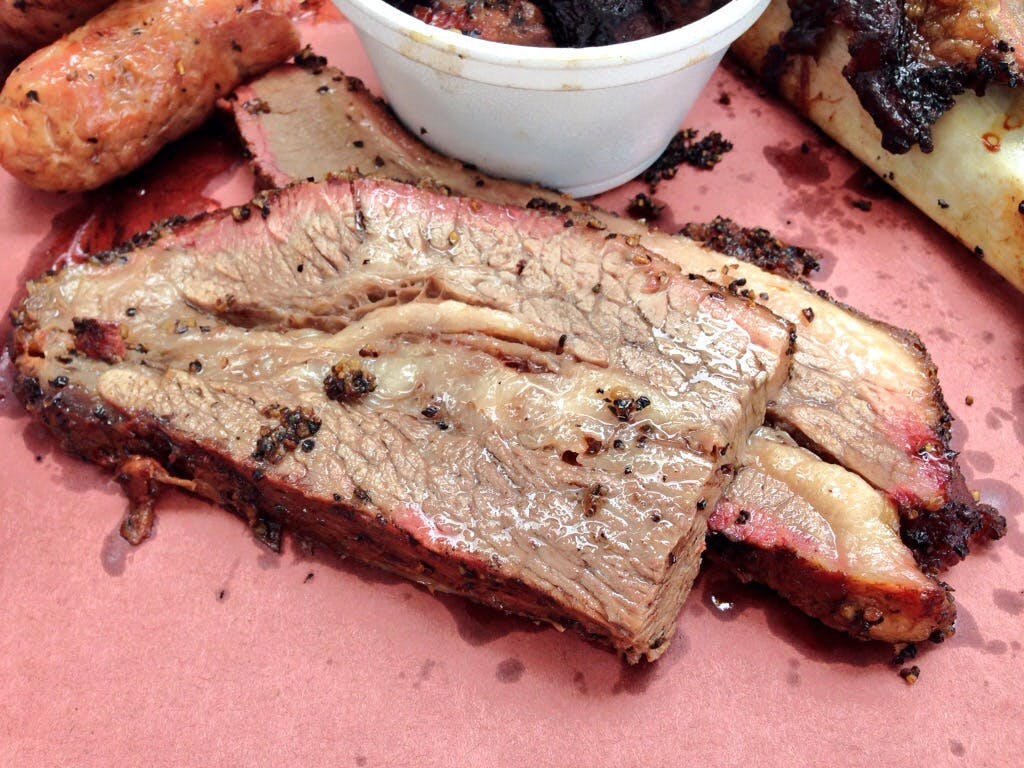 When I say hot and fast, I mean that everything cooks at 350 instead of the mid-200’s. “When it gets over 350, I get a little nervous,” Jurena tells me jokingly. The window of doneness is tighter using this method, so you can’t let items hang around inside the pit lest they burn up. Still, explaining Pappa Charlie’s cooking method can easily come off as an infomercial sales pitch. What if I told you that you could cook a brisket in five hours? What if I told you there’s no need to light a match before you leave for the day? What if I told you that you could load your smoker just before sunrise, and still make great barbecue?

That’s right, five hour brisket. The big beef short ribs take just four, and meaty spare ribs are done in three. Funny thing is, Jurena started out doing the usual low and slow method in competitions. “At the Texas competitions I realized I was one of the only ones lighting a fire in the evening. I kept seeing all these older guys getting up at 4:00am and building a big fire,” Jurena remembered. Then his pit went haywire during a competition. “My pit ran up high and I was in the middle of the competition and I couldn’t get it back down,” Jurena said. He had to cook in the hot smoker, or he wouldn’t have been cooking at all. Since then, there has been no going back. As Jurena puts it, “If I can get what I believe is a similar quality of doneness and render the fat, why would I want to spent 12 or 18 hours doing it?” 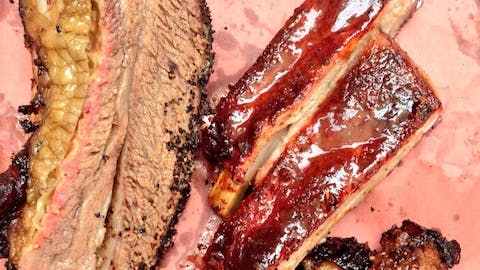 Hot and fast seems to work exceptionally well with ribs. Pork spare ribs had some heft and not a bit of sag. The meat was taut on the bone, but was still plenty tender. With a sweet and spicy glaze, this was the closest Jurena got to a competition barbecue recipe, and it served a welcome counterpoint to the bevy of peppery meats.

Just like most every meat on the menu, the beef ribs get a heavy slathering of salt and cracked black pepper. It’s reminiscent of a Louie Mueller Barbecue rib, but with less rub cohesion. It was pulled from the fire early enough to keep from turning to mush, and the meat easily tore away into tender chunks. It was good enough to make me wonder if short ribs were made to pair with these elevated cooking temperatures.

Beef ribs find their way into another menu item of beef rib burnt ends. The thick coating of sweet barbecue sauce on smoked beef would typically make me cringe, but the crispy edges and sweetness coupled with black pepper made it work. This will raise the hackles of any Kansas Citian, but the uniformity of the beef rib marbling makes for better (and also more expensive) burnt ends than fatty brisket. 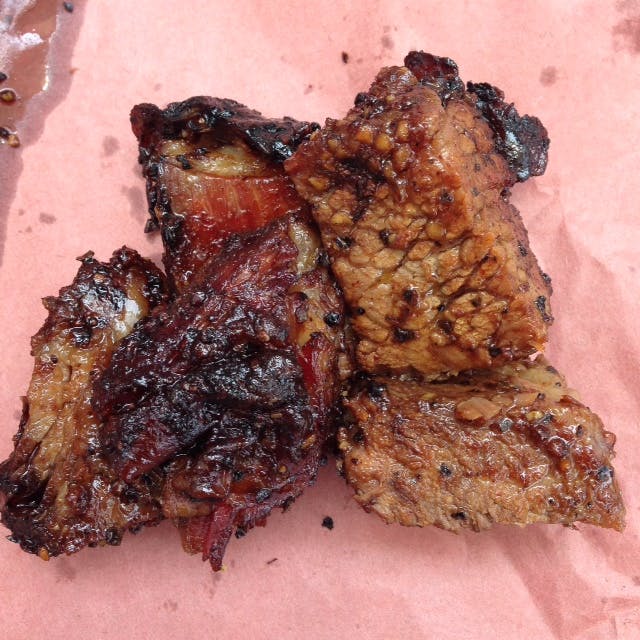 After cooking with Austin’s John Mueller at an event in Houston, Jurena decided that the heavy black pepper rub could become his signature on all of his meats. In the beginning, the idea of a salt and pepper rub was foreign to Jurena, and his early experiments weren’t convincing. “My competition rub is very complex with all kinds of crazy stuff. I think I tried just table salt and plain old ground black pepper. I was like ‘This sucks. I don’t know what everybody’s talking about!'” Then he found the cracked black pepper and the Kosher salt, and we’re all better for it. 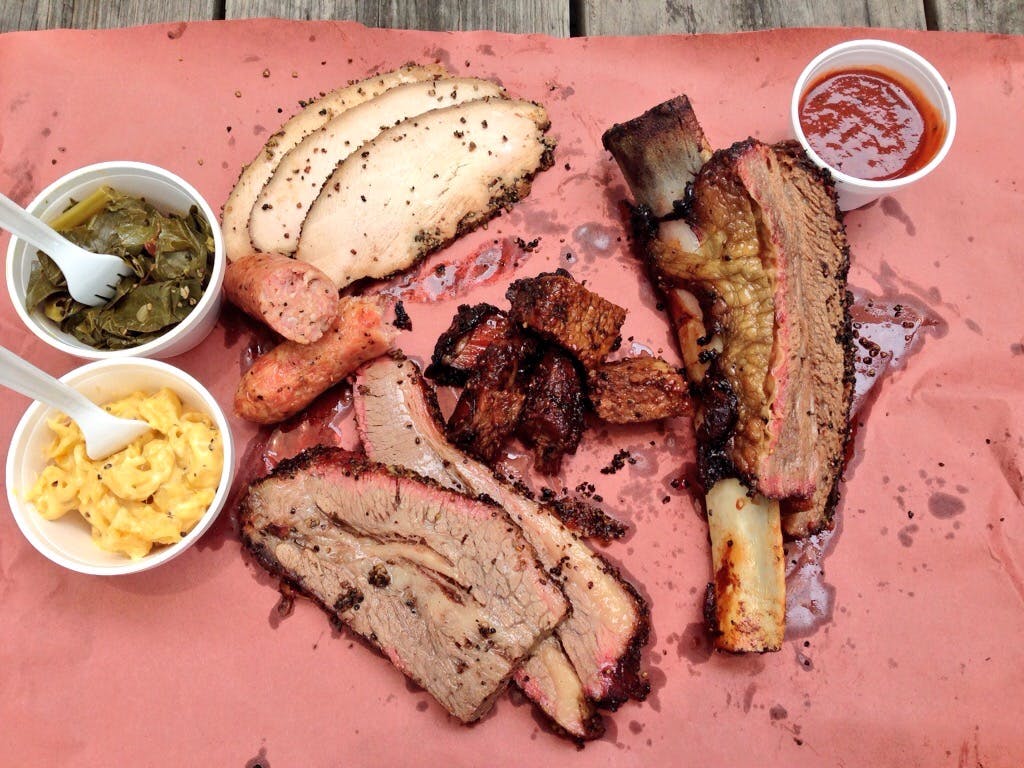 The heavy rub works great on the sliced turkey breast which is moist and tender. A sausage made by an area meat market wasn’t as inspiring. I appreciated the effort, and the link had good seasoning, but the casing was limp and there wasn’t any smokiness to speak of. Side items rotate on and off the menu, but the creamy mac & cheese is a mainstay for a reason. Spicy collard greens were a nice complement as the only other side option.

It doesn’t much matter if he’s cooking hot and fast or low and slow, Jurena is still working hard to put great barbecue on your tray. Lest you think his is the easy way out, remember that the day I visited he was on site at 4:30am prepping the meat for the day and lighting the smokers for a 1:00 opening. When you visit, you’ll be too thrilled with that first bite of beef rib to blame him for finding a way to make great barbecue happen a little quicker.