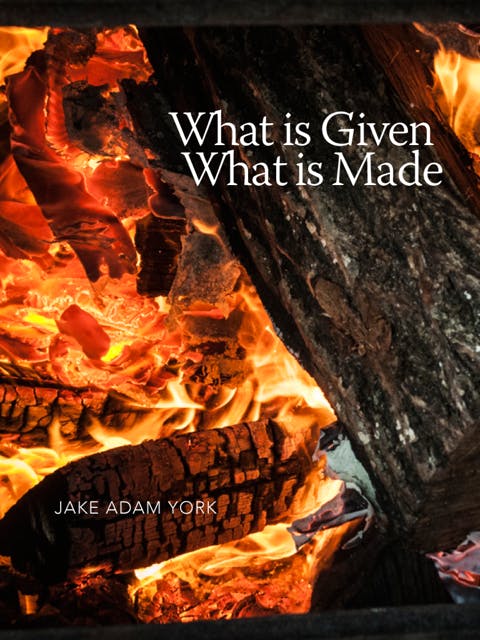 It was a Sunday morning and Jake Adam York was preaching. Poetry was his scripture as he read his own work to a mostly hung-over crowd of Southern Foodways Alliance symposium attendees. Through the mental fog we were captivated. “I know that good poetry shares a spirit with barbecue,” he told us. After he closed with Grace, through tear-filled eyes, we felt the spirit.

That was two years ago, and just two months later Jake Adam York was gone. He died suddenly from a stroke at just forty years of age. It was a tragic loss, but his work and his voice remain.

Shortly after that SFA symposium, Pableaux Johnson worked with Jake to record his poetry in his own voice. Now an iPad book, What is Given, What is Made ($5.99 on iTunes), has been released with Jake’s barbecue related work. Along with the text of ten poems is a recording of Jake reading each one.

The symposium was the first time I met Jake, but I’d been introduced to him years before through his writing. In 2003 he penned and eloquent barbecue journal on storySouth. Looking back at that article now after reading through What is Given, What is Made I see that it formed the foundation of this collection. Today it’s like looking back at the sketches of Picasso.

The collection begins with a discussion of barbecue, barbacoa, and their many meanings in What Is Given, What Is Made. Barbecue sparks plenty of opinions, and that is the subject of To the Unconverted:

The great chain’s links
are live and hermetic as bone,
and where cue burns hotter than politics
every month’s the forge of change,
all scholars temporary and self-proclaimed.

It’s an indictment of my own profession, but I don’t mind a bit because he reminds us immediately in Fire why we love what he calls “this long, sweet business.” Then, in Cookin’ With the Miles Davis Quintet York lets the smoke linger:

the air become music,
become smoke, became a history
of flavor, a book
of memory waiting to be read.

Barbecue infidelity couldn’t be ignored by York who grew up eating pork in Alabama. He likely identified with the stalled out Memphian and pork connoisseur in Otis, His Forbidden Cue, Helotes, TX. Otis found himself fresh out of the pork sandwiches he’d packed for a road trip when he smelled beef smoking at a gas station in Texas. He happily succumbed.

Only memories of good barbecue are present in Rolling Stones, Twix-N-Tween. “The good stuff’s gone” laments the narrator. A fire swept throughout the restaurant and destroyed the pits that once made great barbecue “before the ovens go in.” Memories of my own barbecue road trips, often led by instinct and the specter of smoke, are echoed in Pilgrimage:

we follow
the turns of rumor far beyond
the interstate’s shoulders, the travel
like prayer, so far gone
from any place we know.

Just as that Sunday morning sermon in 2012 closed with Grace, so does this collection:

A touching epilogue written by Jake’s brother Joe York recalls the words he read at Jake’s memorial service. Joe spoke of Jake’s work, promising that “his words were not symbols, they were not mere stand-ins for an idea or an emotion. They were not even words. They were him and as long as they live so does he.”