Update: This joint is permanently CLOSED.

2013: A meat cutter stood next to a cutting block loaded with smoked meat. It was all illuminated by a heat lamp. This was where the cafeteria line commenced. A plate was stacked with sliced brisket, pork ribs and warm, buttered Texas toast. I placed it on my tray and slid down the line. If you’ve eaten at an old cafeteria style joint like this one before, you know the rest. There are warm vats of sauce and beans and various other hot sides followed by the cold sides. A condiment table is stacked with pickles, onions, jalapeños and more sauce. Just before the register there’s a fountain drink machine and a couple cylinders of iced tea. The only thing missing at Raymond’s was the free soft serve ice cream. 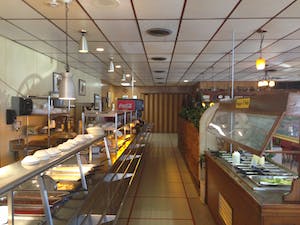 Back in 1964 this building was opened as an Underwood’s Bar-B-Q, and remained that way until Raymond Erwin bought the business in 1981. My first visit five years ago was unimpressive, but they’re under new management now. The meat didn’t look any different. It took only a few bites to assess that the sliced brisket lived up to the visual. It could have been cardboard adorned with a few lines from a Sharpie. Roasted pork was the primary flavor of the ribs that tasted much older than they should have during the lunch hour. If either meat had been sprinkled with seasoning, it was scant. The smokiness was similarly fleeting. The vinegar kick in the thin red sauce provided the only jolt to the tastebuds. A few token jalapeño slices masked the tinny flavor of the beans and the potato salad was a bowl full of give-up. Here’s to warm Texas toast. 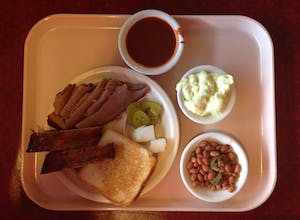 It would have been a thoroughly disappointing meal if I hadn’t ordered an old standby – a chopped beef sandwich. It’s barbecue comfort food, and Raymond’s does it right. You won’t find pre-sauced meat of sloppy joe consistency glopped onto a cold white bun here. No. When the order is placed a bun is buttered and placed on the griddle. Brisket is portioned out on the chopping block and a rhythmic “thwack-thwack” fills an otherwise quiet dining room until only pebble-sized pieces of beef remain. The mound of beef is formed on the now warm bottom half of the bun, but the generous portion can’t be contained. It spills out onto the plate as the top half of the bun is put into place. As the plate is passed over to me I reached for the sauce ladle to bath the meat in the thin red barbecue sauce. After adding a few chunks of onion for texture and dill pickle slices for acidity, I had a lunch I could look forward to during my stroll to find a table. I was about to be reminded of what Aristotle was eating when he said “The whole is greater than the sum of its parts.”At this point it didn’t matter that the beef wass dry and flavor-challenged. Barbecue sauce, butter and squishy bread were here to help. 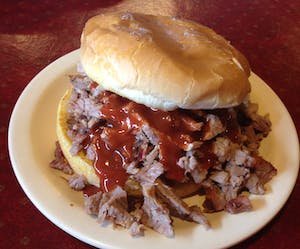 Raymond’s is never going to win accolades for their sliced brisket, and they’ll probably never be recognized for something so seemingly mundane as a good chopped beef sandwich, but they should. A well made chopped beef sandwich is a beautiful and satisfying thing. It is also a secret weapon, or sometimes the only weapon, when dealing with a sub-par barbecue joint. You might be here at Raymond’s or at any of dozens of joints like it in the Texas where it’s understandable to be dubious about the smoked meats, but you must always remember Texas barbecue’s ace-in-the-hole.