It was 10:00am and I wanted ribs for lunch. A good rack of pork ribs takes anywhere from four to six hours in a smoker. The low-and-slow method is pretty foolproof for making them tender and juicy, but I figured I could get the job done quicker. A lot quicker. The solution needed some real thought, so I just went to a local barbecue joint and ate some of their ribs while I mulled it over. I was mid-meal when I remembered El Machito.

In April, I reviewed El Machito in San Antonio, where they cook their ribs over an open fire. They threaded a rod through the rack and placed it diagonally over the flame to create a sort of direct/indirect heat hybrid. Even though they cooked them to tenderness in just two hours, they remained incredibly juicy. I credited it to the overnight brining of the meat, so that’s the first step I took with my rib experiment. (Well, after buying the meat—I started with three racks of the H-E-B St. Louis cut.)

I have an offset smoker, and many of you do as well, but I wanted to adapt this recipe for a charcoal grill. Rather than trying to indirectly smoke ribs in a makeshift grill set-up, I think it’s important to suggest the use of a grill for grilling meat, and a smoker for smoking it. I knew from past experience that grilling meat the normal distance from the fire (eight inches up to the grill grate in my 22″ Weber kettle) would scorch them, so I used the same six-inch extender ring that I used to cook direct-heat beef ribs a few months back. This essentially replicated the direct heat cooking method of barbecue joints like Big Boy’s Bar-B-Q in Sweetwater or Snow’s BBQ, in Lexington. 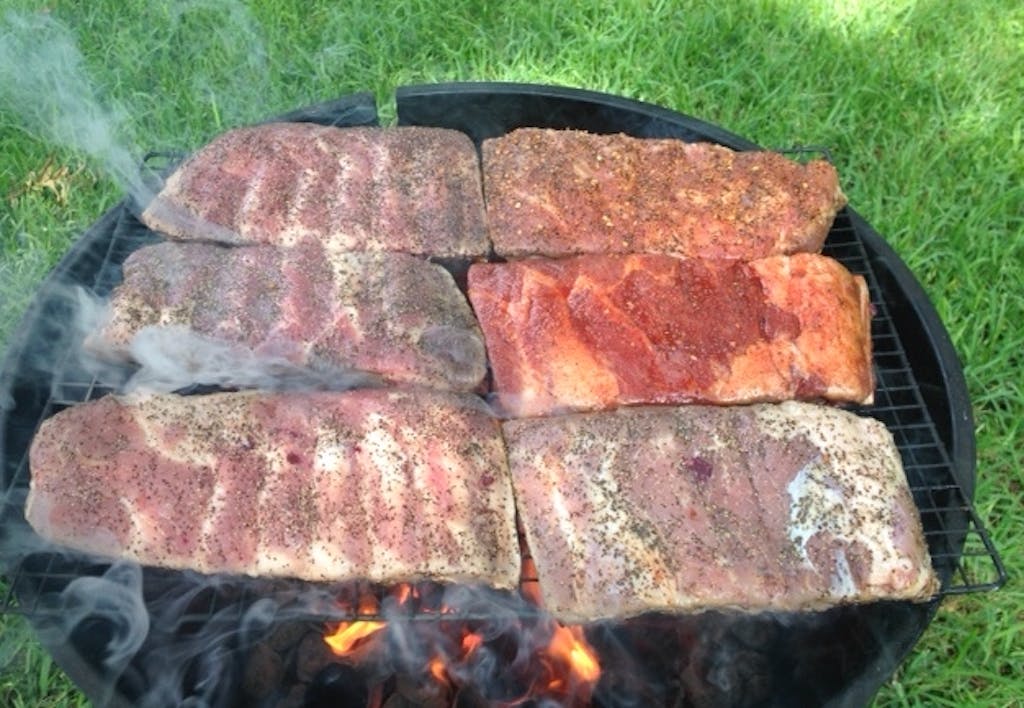 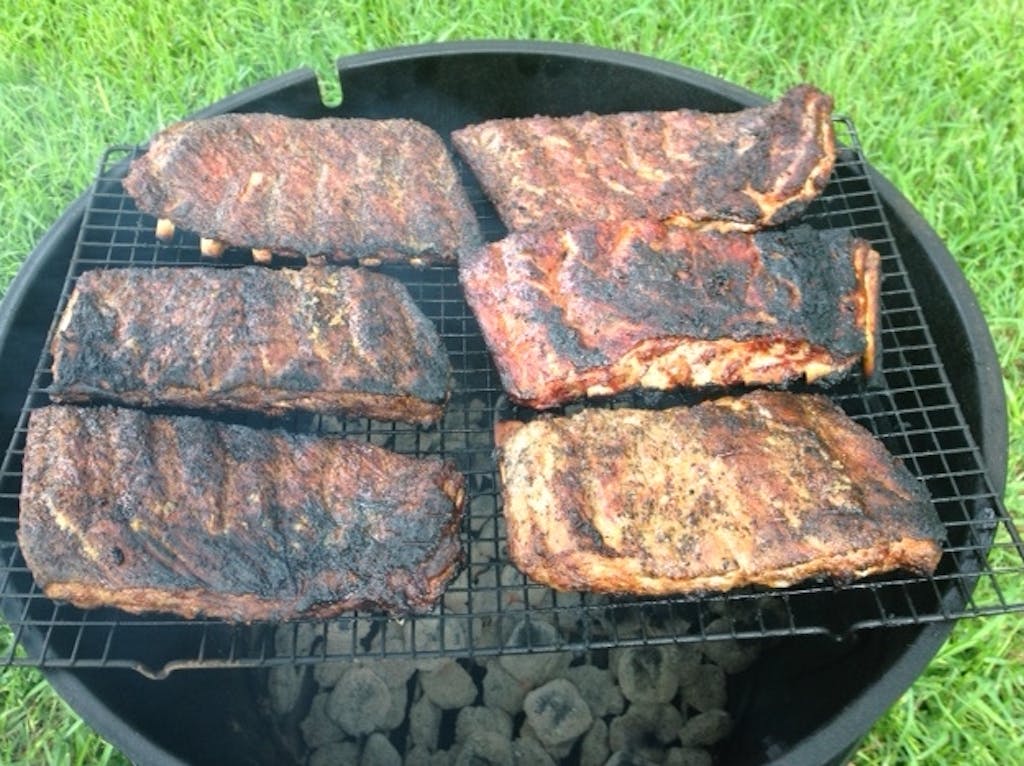 After getting the grill fueled with a large chimney full of charcoal (I started with briquettes, but also tried lump charcoal later on), I was ready to cook. In addition to the brined ribs, I figured I’d try out a few more variables while I had the grill fired up. I won’t go into all the variations in detail because I have a confession to make—I screwed these ribs up royally. First, I left the lid off too long when they started, and the resulting flare-up was enough to scorch the bone side. Then I committed a mortal sin.

If indirectly cooking ribs took about five hours, I assumed this version would take at least ninety minutes, so I left them unattended. I had to pick up my son from daycare, and I wanted him to get a bite of the finished version fresh off the grill. When I returned, there wasn’t much worth eating. With a smoker, if you leave it unattended with a fire that’s under control, the worst that can happen is the fire goes out. With direct heat cooking, you end up with ribs that break apart like a Kit-Kat bar.

What I did learn from that initial cook is that a sugar-heavy rub burns easily (of course), and that pretty much any heavy rub is going to get severely singed. The brined ribs seasoned lightly with black pepper were the only (nearly) edible ones on the grill. The most embarrassing part? I’d invited former Texas Monthly staffer and co-author of the Franklin Barbecue cookbook Jordan Mackay over to witness the pitiful results. At least the beer was cold.

In the next round I bought four more racks of St. Louis ribs, brined two of them, and simplified the seasoning. On a whim, I also bought a rack of thick Berkshire baby-backs ($8.99/lb) while at Central Market (check here for more on pork rib anatomy). The first test was to cook two St. Louis racks simultaneously on a motorized rotisserie on the grill. One rack was brined and other just with salt and pepper, and both were great after a two hour spin. Because of all the water content, the brined rib took a lot longer to develop color, but both were still very juicy. I was beginning to question the need for a brine, but also thought two hours was still too long to not just fire up the smoker.

Immediately after dismantling the rotisserie, I shoveled onto the grill some wood coals that I’d been burning down in a fire pit, then I threw on three more rib racks on the grate. Two were brined while the Berkshire rack was not. To check seasoning levels, I rinsed one brined rack of ribs, and left the other unrinsed (unless you’re a salt fiend, rinse). Both brined racks got a dusting of cracked black pepper. The Berkshires just got a dusting of Kosher salt and cracked black pepper, then went straight on the grill. To keep flames from developing, the lid went on immediately with the vent closed. Twenty minutes later, I checked on them, sprayed them on both sides with a mix of apple cider vinegar, water, and Worcestershire, then flipped them bone side up. The lid went back on, another flip and spray at the forty-minute mark, then bone side down for the last twenty minutes. After sixty minutes on the grill, I took off two racks, and they were beautiful. 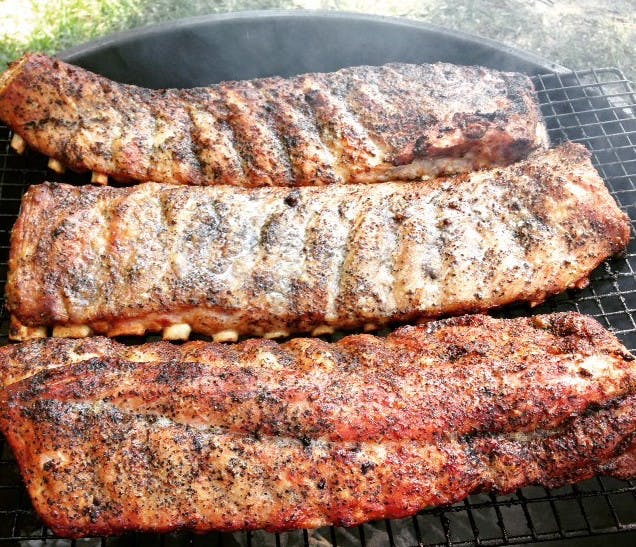 These were great ribs. Nobody would call them “fall-off-the-bone” tender—they required a bit of a tug—but they were by no means tough. The smoky flavor from the fat dripping on the coals was intense, even after just an hour, and the simple rub brought the flavor of the pork through with a force. I had found success, but learned a few lessons. Say what you will about baby-backs, but they get tender a heck of a lot quicker than St. Louis ribs. The meat on a baby back is basically of the same structure as the adjacent pork loin. It is lean muscle that doesn’t have to work much, so it will naturally be more tender than the belly meat attached to a St. Louis rib. Both were good eating, but I ended up with clean bones only from the rack of baby backs.

While I was eating, I left one of the brined racks on for another fifteen minutes just to see how well the brine would protect them. It was fifteen minutes too long—they were already dried beyond even a point that sauce could save them.

To check the timing, and to try out another type a fuel, I cooked another batch of three racks. They were all fresh out of the package without any brining. I see plenty of briquette haters in my Twitter feed, so the next batch used an equal amount of lump charcoal (a large chimney full). It wasn’t enough, and only gave off intense heat for about forty minutes, at which time I had to add another half chimney to finish off the cook. If you’ve got to have lump charcoal, plan to have another half chimney of charcoal fired up to finish the hour long cook. As for the flavor, the difference was imperceptible.

A note on selecting baby backs: Every rack has a line of lean meat running down the center of the top side (see image above). This is meat from the pork loin which sits on top of the baby back ribs. When the two cuts are separated, some of the loin is left behind. The further they cut into the loin, the wider this line of lean meat will be, and therefore the thicker the meat on the bone will be. Basically, a wide pink line of meat means thick ribs, and a skinny line means thin ribs. Thicker ribs work better for this quick cook.

My final cook was just to make sure I could replicate what I thought was the ideal cook. It was a single rack of baby-backs, unbrined, and seasoned with salt and pepper. I loaded the grill with one large chimney of charcoal briquettes, sprayed them a few times with my vinegar mixture, and peeked in every fifteen minutes. They actually cooked a little quicker (fifty minutes), but the end ribs were a bit dried out. I bought the rack on a Sunday afternoon, and the meat case was pretty bare, so I didn’t have my pick of the litter. This one was a little thin, but I won’t make that mistake next time.

After cooking twelve racks of ribs over six days (my family has asked for anything but ribs for dinner for the next few weeks), I’ve learned plenty about how to cook them over some pretty intense direct heat.

1. Brining helps, but isn’t worth the trouble. If you do brine the ribs, be sure to rinse them off before cooking or they become too salty.

2. True wood coals provide the best flavor, but making them defeats the purpose for quick and easy ribs. A large chimney full of briquettes will last the entire hour, while the same amount of lump charcoal will get you about forty minutes.

3. Simple seasonings like salt and pepper work better than a heavy rub. Sweet rubs and sauces will burn.

4. Spraying the ribs with apple cider vinegar and/or Worcestershire provides some extra flavor and surface moisture. Just don’t add a sugary liquid into the spray.

5. Keep the grill lid closed tight and vent closed to keep out oxygen and to keep the flames at bay.

6. Thicker baby backs work best because it keeps from drying them out. A thinner St. Louis rib is best to get it more tender. Thick cut Berkshire ribs would be my preferred cut, but you can’t find them everywhere.

Who says you can’t have great ribs on a weeknight? If you watch your fire closely, keep the seasonings simple, and place the grate a little higher than normal, you can be eating great ribs in just an hour on a simple kettle grill. You might still prefer your smoked variety, but you’ll be stunned at what you can do with pork ribs in just sixty minutes.