I ate a lot of lamb around the state a few months back, but it’s a protein I had never cooked in my own smoker. Given that the most common cut found at Texas barbecue joints is the bone-in lamb breast, that’s what I went searching for. While the cut isn’t easy to find in grocery stores, Walmart Supercenters should carry it (or, at least, my local one in Dallas is selling it for $2.56 per pound). I opted instead to order a few directly from Superior Farms in Northern California, though I wouldn’t pooh-pooh meat procured from other places.

The full lamb breast, which includes the belly and the brisket, is what’s left after the chops and shoulder are removed the front end of the animal. It’s a fatty cut of meat with bones, gristle, and sinew, but it’s relatively easy to cook. The meatiest part of the cut is sandwiched in between the bones and a thick layer of fat just beneath the skin. As it cooks it basically becomes a confit of lamb meat surrounded by fat. Overcooking it or drying out the meat is nearly impossible. 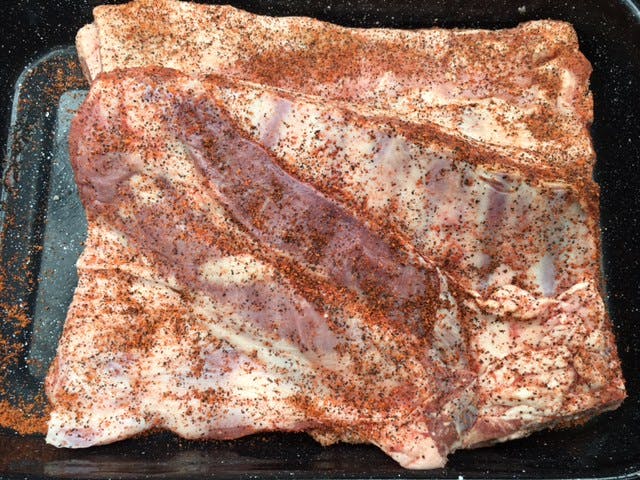 I began by smoking a couple of full lamb breasts, and hanging a couple more in my Pit Barrel Cooker. There was no need for a thermometer since the tenderness at its thickest part gave away the doneness. About six hours was required in a 250-degree smoker (fueled with oak and pecan), and five in the hotter barrel cooker (fueled with charcoal and mesquite chips). When they were done, I first tried cutting off a few individual ribs, but it was hard to follow the bones as they took a sharp turn near the breast bone. After a few sloppy cuts, pulling the meat seemed like a better option. (Another issue was the skin that didn’t get crisp enough to use from either method.) 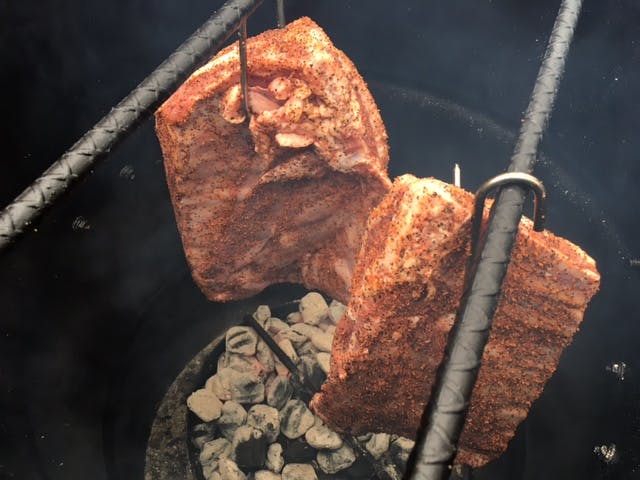 More fascinating was the stark difference in the gaminess in the meat. The lamb breast in the smoker, that cooked slower while sitting horizontally, was far more gamey. The lamb flavor was strong, and a few neighbors winced a bit when they took a bite. But the ones that had hung in the barrel cooker tasted a bit beefy. The gaminess had been tamed. 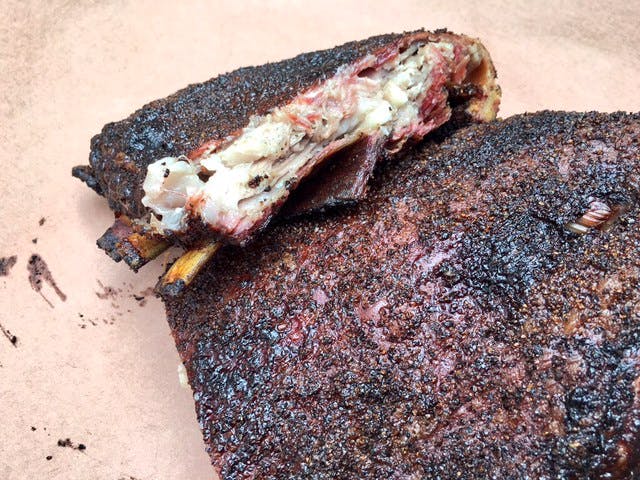 The flavor of cooked proteins come primarily from their fat–or the absence of it. The flavors of the food they eat are stored in the fat, which is why meat from carnivores like bear tastes so much different than herbivores like steers. Lamb often tastes grassy, and mutton is even stronger, but when the fat is allowed to render and flow out of the meat, it loses some of its signature gaminess. Hanging the meat vertically and allowing the fat to literally drain out of the cut as it cooked made for milder lamb.

From the first round, using the Pit Barrel Cooker was the obvious choice for the next experiment. I cooked two more lamb breasts a little hotter. The barrel cooker has a few vents that can be opened further to create more heat. I didn’t used a thermometer, but I’d guess they were cooking at about 300 degrees. To crisp the skin, I cracked the lid open toward the end of the cook to let in more oxygen to create more heat. They were done in three-and-a-half hours. 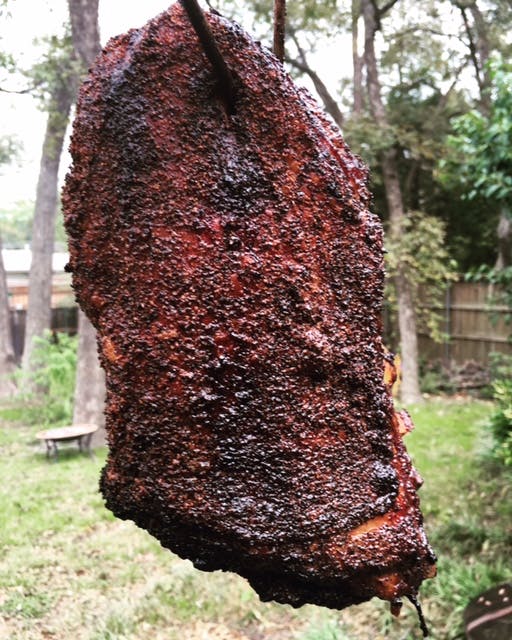 With the many layers of sinew, meat, and fat, it can be challenging to navigate when eating a couple ribs. Pulling the meat away from the bone and fat from the the outset was a better direction. First came the crispy skin which I saved and chopped. I then scraped away the thick layer of fat that remained, saving some of the buttery goodness for the mix of chopped meat. A layer of sinew was then exposed to be easily peeled away revealing the juicy, tender meat beneath. That meat was easy to separate from the bone, and even easier to pull into bite-sized chunks. 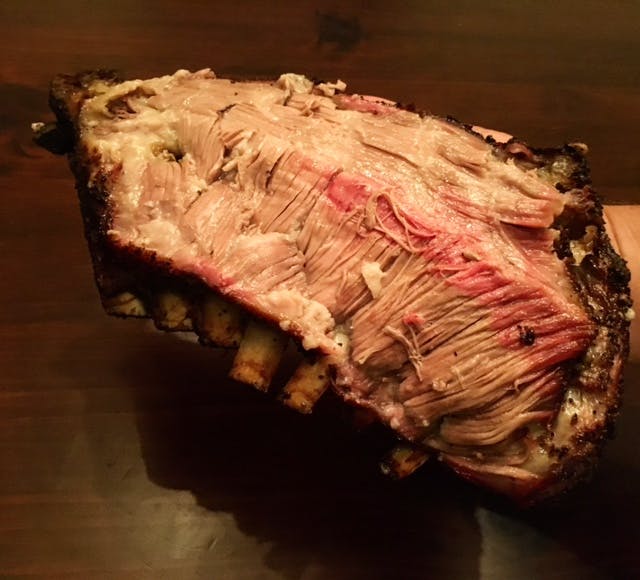 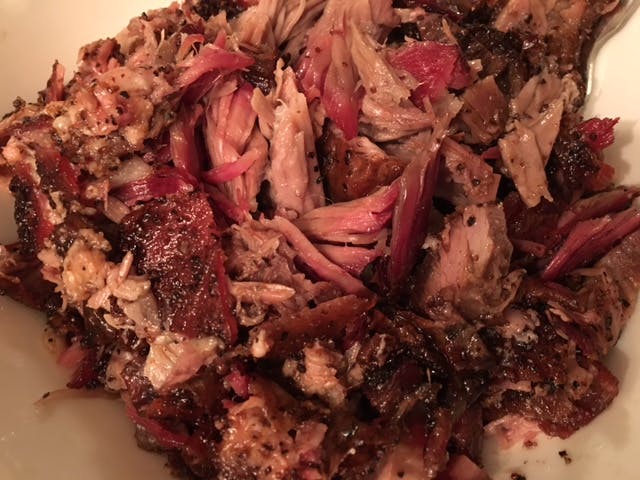 All told, for the entire two-pound lamb breast I was left with three-quarters of a pound of edible meat. That alone will barely feed a hungry family of four, but it makes several great tacos. 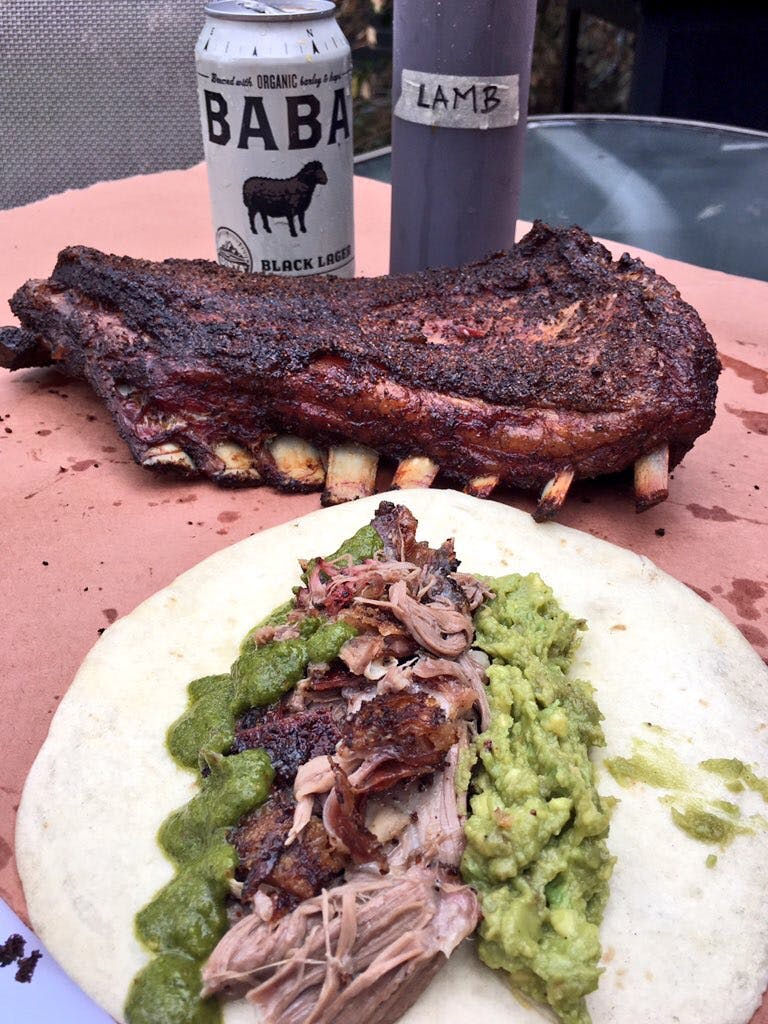 An acidic salsa made a great complement to the fatty meat. A spicy chimichurri also worked well, and some guacamole added some heft. A final drizzle of a vinegar and Worcestershire-based lamb sauce brightened it up. I may be a bit biased, but it was the best version of smoked lamb breast that I’ve eaten, and one of the easiest cuts of barbecue that I’ve cooked.