Big cities in Texas all seem to have a beloved barbecue retreat outside of town. It’s a joint far enough away that you really need to leave the city to get there. For Dallas it is Clark’s Outpost in Tioga, San Antonio has the original Rudy’s BBQ in Leon Springs, Austin has the Salt Lick, and for Houston it’s the Swinging Door.

The thirty mile drive to Richmond from downtown Houston was once a jaunt largely through rural landscapes. Nowadays there’s not a whole lot that’s scenic about the drive given the encroaching subdivisions. The country roads are now concrete streets lined with newly planted trees and sprinkler systems. The now drab drive might keep some Houstonians away, but Swinging Door was still packed on a Wednesday night when I visited. 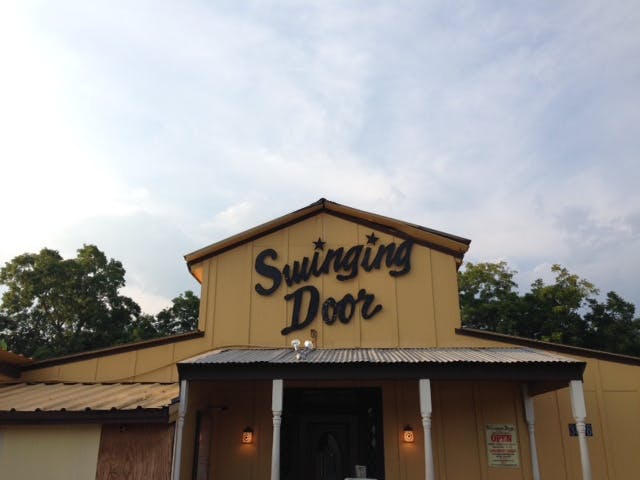 The rustic interior of dark wood walls and tables with green and white checkered tablecloths betrayed the joint’s age (the timeline of the Swinging Door history on their own website stops at 1979). Families and big parties dining together was the norm, so the hostess led me to an open two-top near the bar. A single bulb illuminated the table which was just enough light to read the menu. Besides a garden salad, the choices were obvious – barbecue on a plate or a bun. The “Super” came with three meats and three sides for $18.50. My server swore by the pinto beans and nodded knowingly when I asked for fatty brisket. 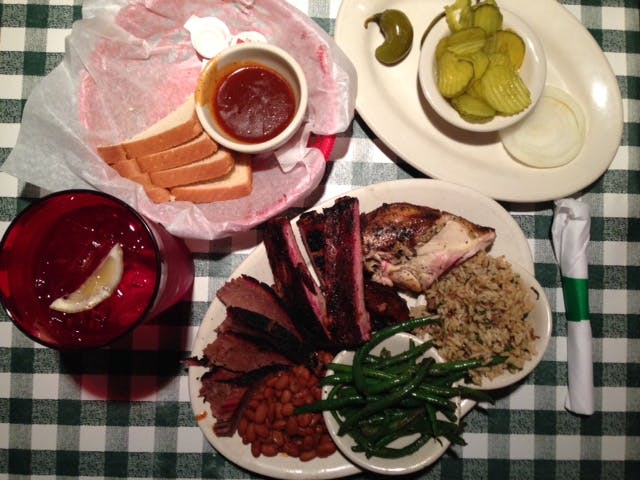 The slicers must not have gotten the message because three generous slices of dried out lean brisket found their way onto my plate. With a bold smokiness and good seasoning, it was brisket with potential. Out of curiosity I ordered some more brisket to-go with a more emphatic request for fatty, and that’s what I got. Albeit devoid of bark and covered in their sweet sauce (note: if someone asks for the fatty brisket, it’s highly likely that they want the bark too). The sauce is fine for dipping bread into, but it has the consistency of pancake syrup and nearly as much sugar. 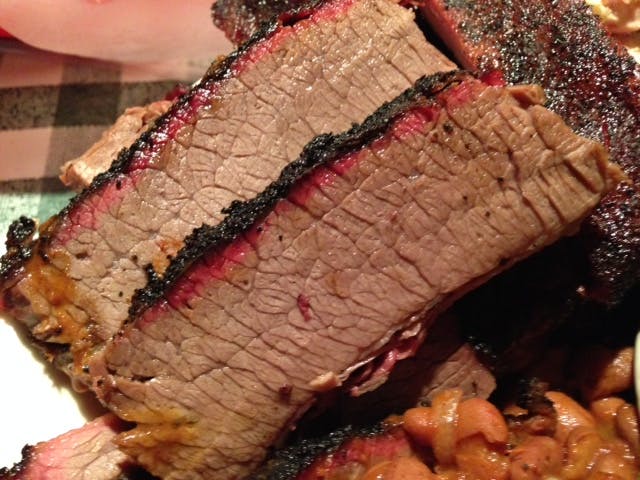 When I mentioned that I was visiting the place on Twitter I got some excited responses wondering if it was still any good. One person wrote “[T]he BBQ of my youth. I’m afraid to go back!” This brisket may have either confirmed or completely dashed their feelings of nostalgia. I guess a trip back here for some with fond childhood memories is taboo in the same way that a current day screening of Crocodile Dundee would be for me. I loved it so much the first time I saw it as a kid, but I just know I wouldn’t be able to muster a genuine laugh at “This is a knife!” if I saw it today.

Those folks who view a return trip to Swinging Door with trepidation need not be worried if they stick to the ribs. They were some of the best and simplest ribs I’ve had in a while. The meat coming off the bone was the epitome of perfect texture. The rub was simple, mainly salt and pepper, and the smoke was subtle but adequately present. These were exemplary ribs. 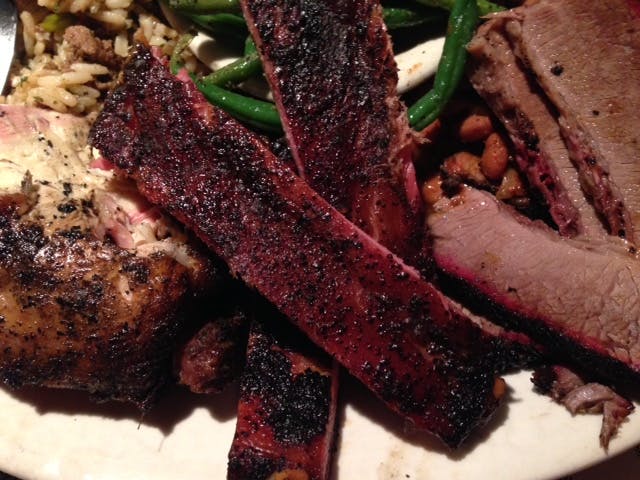 A piece of smoked chicken breast had similar potential, but was served too dry. The smoked turkey was a better option, but needed some smoke flavor. The excellent sides quickly made me forget about both. Green beans were fresh and well seasoned. Flavors in the dirty rice reminded me of turkey stuffing, and the pinto beans had great spice. I tried the sweet, raisin-flecked slaw and creamy potato salad in the to-go order, but preferred what I enjoyed at the table. 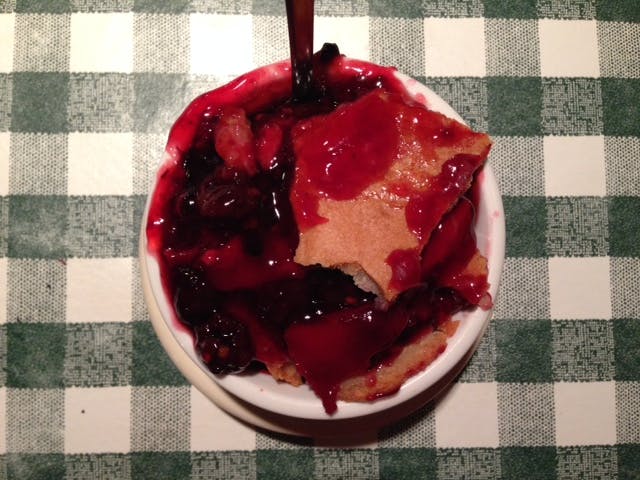 There are plenty of desserts to choose from, including three cobblers during my meal. I opted for a blackberry cobbler that was a bowlful of desirable simplicity. It was sweet, but allowed the tart flavors the berries to shine through. There wasn’t anything fancy about it, and there shouldn’t have been.

There’s also nothing fancy about Swinging Door which is exactly why I liked it. The service was good, and the pitmaster working the evening shift was even polite enough to give me a tour after I barged into the pit room. With so many good options for barbecue popping up in Houston, you don’t have to drive out this far, but there’s just enough good stuff on the menu to make it worth the trip. You might as well do it now while you can still (barely) call it drive out to the country.