It was pouring outside for the third day in a row. “We’re not in Texas anymore,” I thought to myself, despite the fact that sitting before me was a plate of sliced brisket, hot links, potato salad, and pinto beans. I was south of Nashville at Martin’s Bar-B-Que Joint in Nolensville, Tennessee. I was in the area for a week, tasked with caring for my two kids while my wife attended a conference. At Martin’s, owner and pitmaster Pat Martin had brought a tray out to my kids and me for lunch, and Martin and I talked as we ate. He wanted to showcase the variety on his menu and how he took barbecue traditions from all over the south including Texas. This is commonplace with newer barbecue joints opening in well-populated areas. They feel pressure to provide a little of everything—even burgers and chicken fingers—instead of focusing on one or two specialties. I don’t know if a shop that exclusively sells great pork sandwiches could survive in the Nashville area, but during my travels, I certainly didn’t find any brave enough to risk that business model. 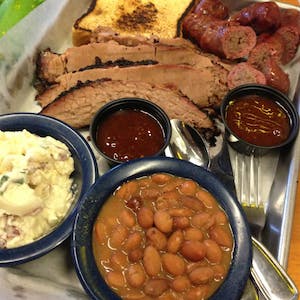 I was puzzled when I saw that Martin’s serves brisket. My general rule is to eschew brisket in states where residents argue that the very definition of barbecue doesn’t include beef, but Martin’s was better than expected. This wasn’t smoked brisket to make a Texan switch allegiances, but it was smoky, tender, and well-seasoned. The hot links were also spectacular.

After we finished our meal, we spent the next twenty minutes watching a hog carcass get prepped and ready for a long night on the smoker. My four-year-old daughter demanded that we stay until it was done cooking, but we had more barbecue to eat.

Just down the road from Nolensville is Jim ‘n Nick’s Bar-B-Q in Smyrna. This is just one location in a chain that spans seven states—none of which are Texas, so this was my first visit. They too had brisket on the menu, but I kept it to the regional specialties and got baby back ribs and pulled pork. It was certainly the best barbecue I’d ever gotten from a drive-thru (the kids were napping at this point). The baby backs were served dry and had plenty of smokiness. They also had a more subtle seasoning than I’d expected. The pork was less smoky, but there was a nice mix of dark and light meat in my serving.

Jack’s Bar-B-Que has been open in Nashville since 1976, and it’s a joint that proclaims itself to be the “Bar-B-Que King of Nashville.” I didn’t visit Jack’s Bar-B-Que on this trip, but I’ve been there a few times before and remember the sauce selection (there are six) being more notable than the smoked meats, which I had higher hopes for because they use a Dallas-made Bewley smoker. Jack’s menu tips its hat to regional items, like Texas brisket and Texas sausage, Boston smoked turkey, and St. Louis style ribs, as well as the expected Tennessee pulled pork. As I said earlier, this nod to other styles of barbecue is fairly common at Nashville joints. Even places with names like Top Hog and Hog Heaven feature brisket on the menu.

But there are still some places that unabashedly celebrate pork and turn their noses to other meats. Nashville’s newest joint, Peg Leg Porker, is one example of this. Owner and pitmaster Carey Bringle grew up eating pork barbecue in Tennessee, and his menu of ribs and pulled pork reflects that. I was lucky enough to visit Peg Leg as a Tennessee Titans home game was playing, and Bringle had done a whole hog for the occasion. There was a crowd gathered around the pit as Bringle passed out chunks of meat pulled straight from the hot hog. Long strands of belly meat were as moist as fatty brisket. A few of us vied for the few bites of rich jowl meat. It all had a clean pork flavor with a very subtle smokiness and almost no added notes from seasoning. Back in the dining room, a slab of ribs couldn’t have been more different. They almost glowed with a thick coating of Bringle’s signature dry rub. They looked like something you’d find in Memphis, but tasted better than most of the ribs I’ve had there.

On Friday afternoon, after my had wife finished up with her conference commitments, we headed out to the western side of Tennessee. My ever-supportive wife encouraged me to take in as much barbecue as I cared to eat on our way back to Dallas. That was her first mistake. It would take us the rest of the day just to make it to Memphis, a trip that should take no longer than three hours. The first stop was Scott’s Bar-B-Q in Lexington. There were three menu options: pork by the pound; a pork sandwich; or a large pork sandwich. We went with a trio of pork sandwiches with slaw and sauce, which is a rust-colored thin vinegar sauce with red peppers. It was similar to the sauces I’d found in eastern South Carolina, and I liked it. So did my wife who doesn’t normally like barbecue or barbecue sauce. She ate a whole sandwich on her own without stopping. So did I. The smoky pork with the piquant sauce and the cool mayo slaw came together so well on the soft white bun that I didn’t bother setting mine down before it was gone. I’d have gotten another one immediately, but we had more stops lined up. 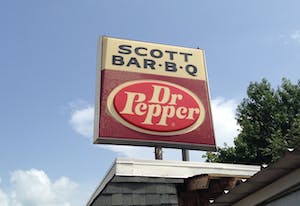 I’d gotten a tip about Jack’s Creek eponymous barbecue joint, located at the town’s only corner. A series of wood-fired pits out back were in disrepair, and according to the owner they hadn’t functioned in a decade. It seems the health department isn’t keen on wood cooking, or having a detached pit room. Instead Jack’s used an electric cooker, and it tasted that way. The only flavor was from the sauce.

Just down the road was Siler’s Old Time BBQ. Apparently they hadn’t gotten the same treatment from the county health department because they were cooking with wood in a detached-pit room. The pork was roughly chopped with a sauce that had a hint of sweetness and it was topped with a red slaw with a heavy vinegar flavor. It was a bit surprising to have the pork provide the sweetness and the slaw to bring the tang, but it worked.

The afternoon was turning to evening, and I had a carload of people who’d had enough barbecue, but I had been wanting to make a stop at Helen’s Bar-B-Q in Brownsville since I’d seen her in Joe York’s film “I am the Pitmaster.” I met Helen briefly during the Southern Foodways Alliance symposium where she won the group’s annual “Keeper of the Flame” award. At the restaurant, I ordered a chopped shoulder sandwich, which I ate while sitting on the trunk of my car. It was loaded with meat, mayo slaw, and a thicker, sweeter sauce than the rest I’d eaten that day. It was late in the day so the meat wasn’t at its best, but it was still a great sandwich. I’m happy to go back around lunch time to find out what I might have been missing.

After a night in Memphis we tried Interstate Barbecue. They’re known for barbecue spaghetti, which is nothing more than a novelty. All you need is a a couple of bites to get the idea. Beyond that, and you’ll likely tire too much of the porked-up spaghetti loaded down with barbecue sauce. I didn’t want much of the sandwich of dry pork either. We hurried over to Cozy Corner for some of their famous cornish hen. The meat was moist, the skin was crisp and the flavor was play between the subtle seasonings and the kiss of charcoal smoke. There really wasn’t a better way to say farewell to Tennessee than this dish. 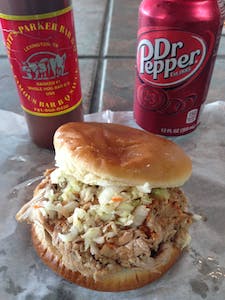 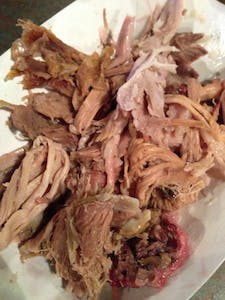 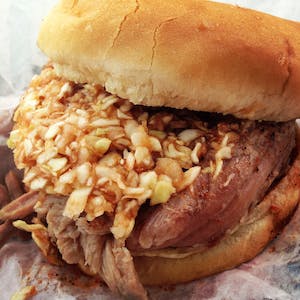 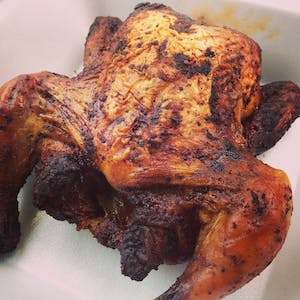 Food I wish I was eating right now: 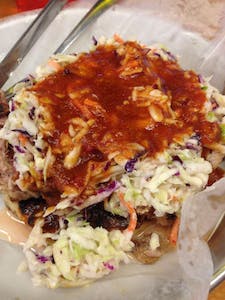 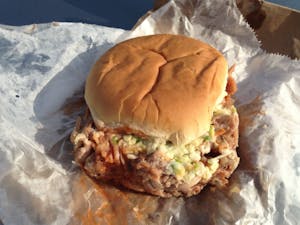 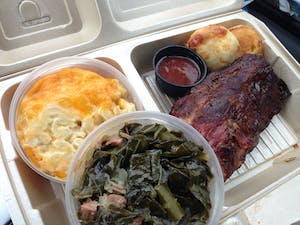