The smell of manure hit me when I broke the seal of the rental car door in Farwell, Texas. Just a mile and a half south of town is a sprawling cattle feedlot, and traveling the ninety minutes from Amarillo I drove through towns like Bovina and Hereford. Just by the names you now they’re not growing tulips out here on the Plains. This is cattle country.

You can see New Mexico while standing in the gravel parking in front of The BBQ Shop on the east edge of Farwell. It’s not a place you just happen upon, unless you’re driving from Lubbock to Clovis, New Mexico. Chances are you’d be disappointed if you came here unplanned anyway. By the door, a bold sign with red letters explains it all. “Open Thursdays 7:00am until the food is gone! Cash or checks only.” Yes, that’s one day a week, and the barbecue is usually gone by noon. Call it the Snow’s BBQ of West Texas. 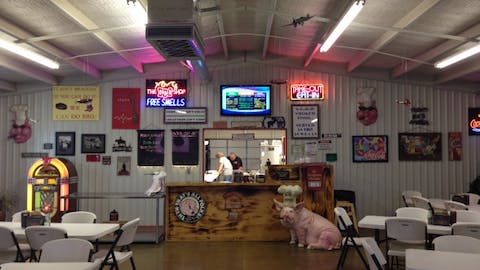 This is a second career for Kelly Mimms. He and his wife Judy have run the place since 2010 with minimal help. Call in orders are a big part of their business, and Judy wears an ear-piece all morning while labeling and filling a stack of styrofoam trays. She pauses for an introduction and smile, but gets right back to work. Kelly is the talker, and works the front counter which is dwarfed by the expansive dining room it sits within. The size of their kitchen would make most every-day operations jealous, and there’s even a separate space just for storing wood and housing the two Oyler rotisseries. They’ve got more than enough infrastructure for more than one day a week, so I asked Mimms why he limits the hours so much. “I’m old, and I’m tired, and it’s a forty hour a week job. We spend three days every week just getting ready.” 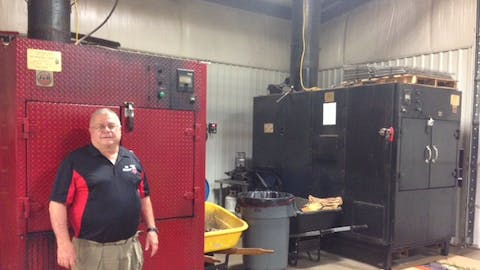 I started with half the menu and sat alone at a plastic table. It was 8:00am, but the “lunch” rush doesn’t build steam until 9:00. By 11:00 Mimms says customers will start to get disappointed when their favorite menu item is gone. It’s even harder for folks in Clovis, New Mexico who run on Mountain Time. It’s just a few miles west, but The BBQ Shop will be out of food by the time their lunch break hits. When I went back to the counter for the other half of the menu, Mimms asked if I was that guy from Texas Monthly. “Nobody orders that much food to eat here,” he tells me. 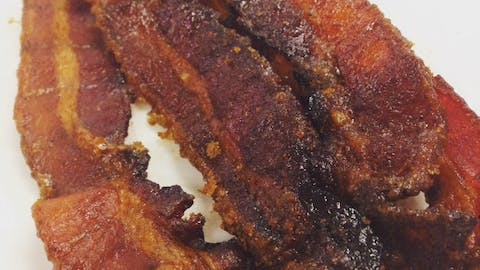 I felt fortunate to get some of the much coveted pig candy and one of the fresh baked pork rolls. Pig candy is thick cut bacon rubbed with sugar and spices, then smoked until crisp. It’s packaged like a bacon jerky and served at room temperature, but with the description you don’t need me to tell you that it’s good. The pork bun looks promising, and the fresh bread surrounding the pork is great. It’s the filling that fails. Pulled pork is apt to dry out just sitting in a warmer, so the heat of the oven exaggerates the issue. Without a sauce in the filling, or really anything to keep the pork juicy, it turns to a tangled web of pork yarn. The juicy pulled pork sandwich is a better way in which to enjoy it. 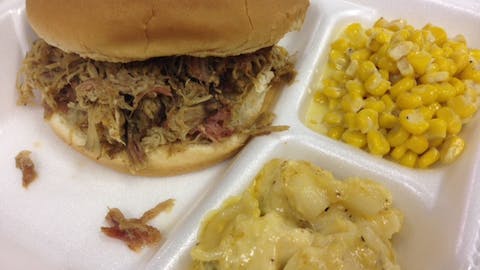 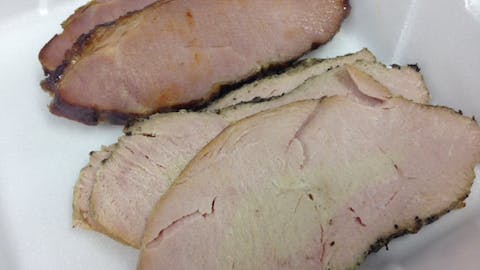 The ham and smoked turkey are both admirable in that they use whole muscles at The BBQ Shop. Most of the barbecue joints in Amarillo and Lubbock are happy to warm up deli ham and turkey in the smoker (just look for slick surfaces pocked with air bubbles), the boneless ham here eats like a steak. The flavor of the sweet rub comes through more than the smoke, but it’s worth ordering. A generous amount of black pepper gives the turkey some pop, and it’s just moist enough.

The brisket is the most impressive, especially given the geography. Tyler’s in Amarillo smokes a good one, and Evie Mae’s just south of Lubbock is a solid newcomer, but the Panhandle isn’t exactly a honey pot when it comes to smoked beef. At The BBQ Shop, they take a page out of Aaron Franklin’s book and wrap the beef with butcher paper part-way through the cook. The beef is smoky and juicy with a pleasant salty rub. It’s a bit overcooked and falls apart too readily, but I’ll take that over tough brisket anytime.

If you’re craving smoked beef, stick with the sliced brisket and don’t bother with the sauce covered burnt ends. Instead of fatty end cuts, you’ll just get sauce covered cubes of lean beef. Mimms smokes only brisket flats. They might be good bites of brisket, but you’d never know after the assault of thick, sugary commercial barbecue sauce. 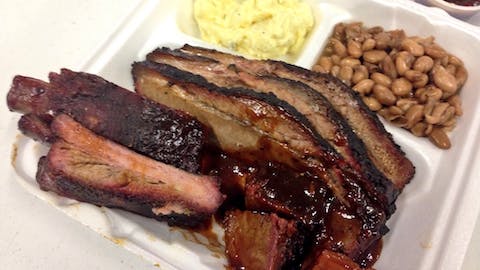 The ribs show off Mimms’ competition barbecue streak. He said he only ever entered two, and decided not to spend any more money on playing the game after finishing near the bottom in his second contest. These sweet ribs would have fared well with a exemplary tenderness and good smokiness. 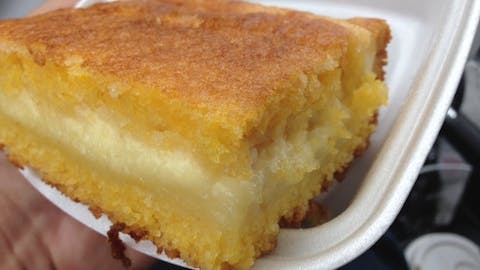 The sides veer wildly between boring – mass-produced potato salad and lifeless beans – to lively with a rich mac and cheese and zesty creamed corn. There’s also a filling and sweet corn bread filled with custard. It’s hard to tell whether it’s a side item or a sugary breakfast option, but it was good nonetheless.

The BBQ Shop was an enjoyable reward on a rainy Thursday morning. It’s a pain to get to, open only about five hours a week, and only takes cash. It’s hard to imagine that many barbecue fans with a day job will have the opportunity to seek it out, but it’s worth the trip, especially if you find yourself in West Texas craving barbecue for breakfast.