Barbecue in the Carolinas means pork, but it’s not just any pile of pulled pig that’s revered in eastern North Carolina. Whole hogs cooked over wood fill the legendary pit houses in this part of the state. It’s the traditional route, but it’s harder to execute than pork shoulders, which are popular on the other side of the state. For years there was a move away from the old standard and even wood cooking altogether. When old traditional joints would close, there weren’t any new whole hog cookers to replace them. Thankfully, those whole hogs cooked over wood are quickly coming back in style thanks to a few pitmasters who have found other ways to compromise.

Samuel Jones knows he’d have been laughed out of North Carolina if he’d switched to pork shoulders or gas cookers. He’s the third generation of Skylight Inn, a legendary joint in the small town of Ayden that’s been serving chopped whole hog since 1947. When Jones announced that he was opening a new restaurant under his own name ten minutes north, in Winterville, people started talking. Rumors swirled that Jones had bought gas cooker for the shiny new restaurant, and that he wouldn’t bother with whole hogs. Some even speculated that he’d just bring the cooked hogs up from Ayden. “I had a good mind to put up a sign on the smokehouse out here that said ‘Ayden,'” Jones joked. “Because everybody just said, ‘Well, you know they’re just cooking everything in Ayden.'”

But Sam Jones BBQ opened in late 2015 without gas grills or imported hogs. Maybe folks assumed Skylight Inn skated by health department codes thanks to its longevity; there’s a common belief that grandfather clauses are the only way that joints can continue to cook with wood, a myth that has been thoroughly debunked. That isn’t to say that opening a new spot with all-wood cookers is easy. Jones, a fire chief himself, had to convince the local fire marshal that an expensive fire-suppression hood system wasn’t required in his detached smokehouse. He made it a little easier on himself by switching away from wide-open brick pits to enclosed cookers by BQ Grills. Jones collaborated with Melvin Whitman, BQ’s owner, on the design of the cookers when Skylight Inn needed a traveling rig for festivals. Jones liked them so much that he bought a fleet of them for the new restaurant. They can each cook two hogs at a time with far fewer coals than Skylight Inn’s brick pits. It’s a touch of modernization that allowed Jones to cook more efficiently, and helped him eliminate the need for those hoods.

Jones downplays the influence of his design, but he helped set a modern precedent for other barbecue joint owners to point to when arguing for all-wood cookers in their restaurants. Elliott Moss brought in a pair of BQ Grill hog cookers when he opened Buxton Hall in Asheville, North Carolina last year. He wasn’t keeping up a family tradition, or even a local one. The mountains of North Carolina have as much whole hog history as the plains of Iowa, but that didn’t matter to the native of Florence, South Carolina. He wanted to cook whole hogs in his own style, which is heavily influenced by barbecue in the Pee Dee region of South Carolina. “I call it Carolina-style,” he told me during a visit to the restaurant. “I don’t call it South Carolina or North Carolina, just Carolina.” 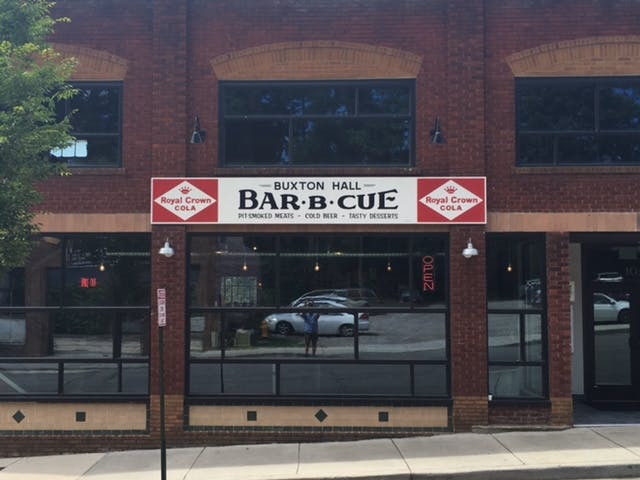 To Moss, the quality of the hogs is just as important as the cooker and the fuel. Buxton Hall sources theirs from a couple of farms in the area, and on the day I visited it was from Carolina Heritage Farms. The hogs can be massive, so a half a hog is a common site on Moss’s pits. He also piles catfish and half chickens in with the hogs so the smaller meats can soak up the flavor of hog fat hitting the coals. Both the chicken and catfish are then breaded and fried, the former doused with spicy mop sauce before hitting the plate. Both were as good as the whole hog sandwich ($10.97 with a side) that came piled high with lightly sauced pork and rough chopped slaw.

The menu at Buxton Hall is eclectic for a barbecue joint. The hog, chicken, and catfish are joined by South Carolina hash (made from pig offal), ribs, and even mussels. Dining here was the first time I tried chicken bog, another South Carolina specialty of chicken and sausage mixed with rice. This one had plenty of black pepper and green peas, and if it was any indication of the quality of other versions around the state, I plan to become a bog booster. The sides were also fantastic, including green beans cooked in the pit and flavored with hog fat. Buxton Hall shows how to honor tradition while letting the chef go beyond pulled pork. It’s this wide yet well-executed menu that has helped earn them early accolades, including being named one of the ten best new restaurants in the country by Bon Appétit. But how their review failed to mention the peach pie, I’ll never understand.

After the meal at Buxton Hall, Moss directed me to Old Etowah Smokehouse about forty minutes south of Asheville. His old buddy Mike Moore took over the place in June, and they shared a hog supplier. On my quest to find new whole hog joints, I didn’t expect to uncover one so new, and especially didn’t expect one serving smoked brisket.

Along with the building, Moore inherited a brick offset smoker built back in 1981 by original owner Gene Miles. Miles cooked a whole hog on the pit every week for the Sunday special, but Moore figured the pit hadn’t seen one for fifteen years when he took over. Now he smokes seven a week, big ones supplied by the same farm Moss is using. Whole briskets cook alongside the pigs under a mixture of oak, hickory, and maple wood smoke. It’s an oddity in these parts (as is whole hog), but Moore, who’d never cooked a brisket until he opened the joint, was hooked on the idea after reading Aaron Franklin’s brisket manifesto. He even grinds beef and pork into a homemade spicy hot-link sausage. The Texas barbecue influence is hard to escape, even in North Carolina.

When I saw some pork shoulders on the pit, I thought Moore was cheating a bit by supplementing the whole hog meat, but he quickly corrected me. You’ll find both chopped and pulled pork on the menu ($6.95 for a sandwich with slaw). All the chopped pork is done in the eastern North Carolina style with the skin mixed in along with a vinegar sauce. As for the shoulders? “A lot of people here only want pulled pork from the shoulder,” he told me, and he aims to please. Trying both side-by-side, I’d go back for the chopped version.

You don’t get an option for chopped pork at Picnic in Durham—it’s all pulled. “I think the prevalence of chopping increased as the quality of the pigs themselves went down,” Picnic pitmaster Wyatt Dickson told me. In his mind, chopping the meat is a way of hiding toughness and dryness. Picnic’s hogs come from Dickson’s business partner and farmer Ryan Butler. They’re a cross breed that comes in big and fat, and the meat is plenty juicy right off the smoker.

Half hogs weighing in at 115 pounds cook skin-side down in two smokers built by BQ Grills. They’re a different design than Jones’s, meant to cook the hogs slower in their own fat. The skin is burnt up during the process, so it doesn’t get chopped into the meat like the other joints mentioned here. That also means Dickson’s pork is more mild in flavor, and any smokiness is subtle. The strands of meat are doused with Pig Whistle sauce to liven it up. Dickson calls the sauce recipe “The Great Carolina Compromise,” because it blends traditions for the eastern and western sides of the state. It’s appropriate here in the middle of North Carolina, and it works well on the pork. The shredded mayo-dressed slaw (an eastern North Carolina touch) tops the sandwich nicely.

Like Buxton Hall, the menu at Picnic is more diverse than most barbecue joints. There’s excellent fried chicken dredged in smoked buttermilk, blackened catfish, and a burger topped with pimento cheese. There’s a little something for everyone, and lots of menu items that help offset the cost of those heritage breed hogs. The generously stuffed sandwich is still a good deal at $8.95, which includes a side. I’d go with the greens.

Back in Winterville, Sam Jones had to wrestle with bridging the gap between tradition and the future of barbecue. He couldn’t sustain a restaurant that was fully reliant on whole hog to make a profit. A sandwich of chopped pork and slaw on a warm potato bun is $8.25, and Jones still gets plenty of complaints on price. It doesn’t help that a joint up the road cooking with gas is selling sandwiches for $3.45 (without a side), but I can tell you from experience that I’ll happily pay extra.

Jones and his business partner, Michael Letchworth, have composed a menu that offers a lot more than chopped pork. Sam Jones BBQ isn’t a roadside shack run by a couple folks. It’s a new restaurant with 50 employees. When you’re building from the ground up, you can’t do it with whole hog alone anymore. While I alternated between chicken wings and a slow-smoked spare rib, Jones told me, “I don’t want to be everything to everybody, but if there’s a market for it, why not?” There’s certainly a market for their 1947 burger, orders of which backed up the drive-thru in the early weeks of the restaurant. It’s an homage to the early days of Skylight Inn, when burgers were just as big a part of the menu as the barbecue. Saying things are coming full circle might be a stretch, but Jones is close enough to his own family’s tradition to be comfortable.

These joints represent a modern path for barbecue expansion in North Carolina. Big menus that can please a crowd and bring back regulars more than once or twice a week are necessities for a joint that’s just opening. But they’ve also been smart to make whole hog barbecue a focus. I’m not sure if it was calculated by every owner, but cooking whole hog is like a cloak of traditionalism that helps protect them from the skepticism that always comes along with new methods and unfamiliar menu items. They’ve found a way to keep a North Carolina tradition alive, even if it means breaking from it a bit to keep their businesses healthy.