After construction delays on a restaurant renovation and a pitmaster switch, the Pit Room opened a month ago in Houston. They’ve brought old-school, wood-cooked barbecue to the Montrose neighborhood, but the rest of the menu shows a chef’s touch. I liked it so much, I ate lunch at the Pit Room twice in one day. 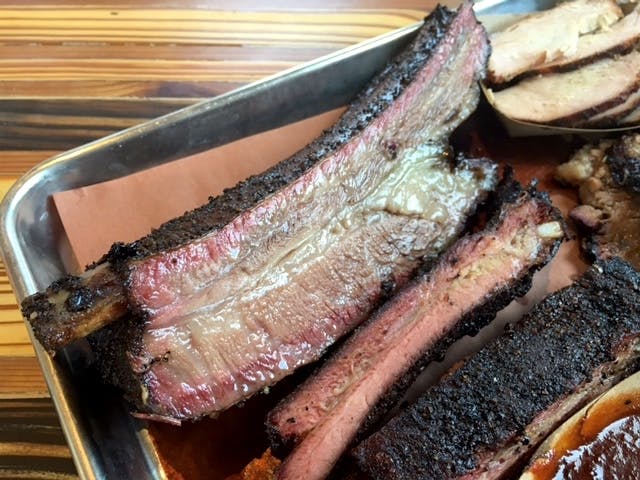 I had just finished a spectacular beef short rib and the best slice of cherry pie I can remember (sorry, Aunt Susie), when chef/pitmaster Bramwell Tripp told me about the house-made jalapeño and vinegar potato chips and the hot-sauce drizzled chicharrones that I had skipped over during my first meal. I had already tasted half of the menu, but listening to Tripp describe the rest of the dishes as we stood between the restaurant’s two oak-fueled, offset smokers, I felt compelled to go back out and order the other half. I don’t regret that decision.

Tripp took over in the kitchen after Michael Sambrooks, the Pit Room’s owner, parted ways with his first pitmaster, John Avila, late last year. Tripp came with a pedigree that included stints at Coltivare and Revival Market, two of my favorite non-barbecue restaurants in Houston, but he didn’t have any barbecue experience. Now, just a month in, the Pit Room can be counted as one of the most promising barbecue joints in Houston.

I generally wait six or eight weeks after a restaurant is open to write a review, but I view my job’s primary purpose as connecting people with good barbecue, and you’re going to find it at the Pit Room. Standards like the brisket, especially the fatty side, were excellent. The Prime beef was smoky, but not overly so. The same goes for the pork ribs, which are just tender enough without falling off the bone. The spice rub has more to it than salt and pepper, and the bark is stout. I pulled the meat from the top of one rib just so I could dunk it in the thick, glossy sauce. The barbecue sauce is the color of adobo, and is as thick as a long-simmering marinara. It tastes a bit like a marinara too, but gets plenty of barbecue flavor boost from the smoked, rendered brisket fat. It’s the kind of sauce I wish they’d use in Memphis for their overly sweet barbecue spaghettis. 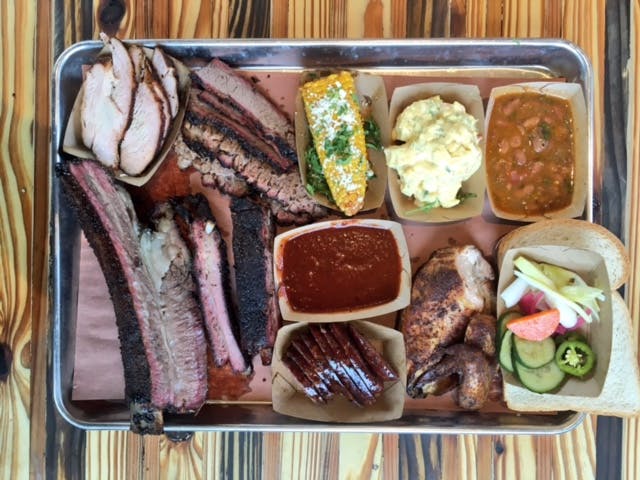 The smoked turkey is also great with the sauce, although it doesn’t need it. Slices of lean turkey breast were juicy and smoky. The chicken was nearly as good, but the skin could have been more crisp. You can check to see if the chickens are to your liking before you order. They hang, Chinese-barbecue style, under a heat lamp along with the sausages above the cutting block. All the meats are cut in front of you as you order them, so it’ll be hard to decide between the homemade sausages. I’d say get them all, but they force you to buy a whole link, so it’s hard to sample. The garlicky Czech sausage was studded with mustard seeds, and the jalapeño-cheese sausage had chunks of peppers that were glowing green. I preferred the denser venison sausage that was heavy on the black pepper, and they’re all house-made. “It took us about seven months to get the sausage where we wanted it,” Tripp told me. 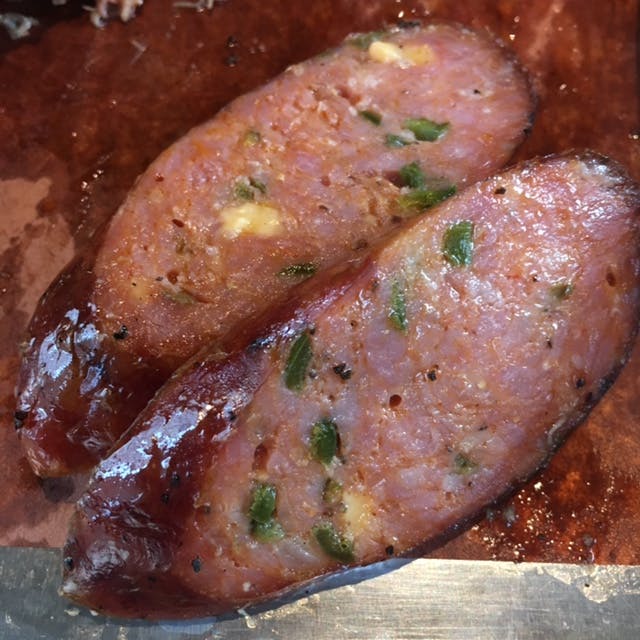 The chef’s side of Tripp shows in the quality of the sides and garnishes. Pickled green onions come alongside the crisp pickles. Four salsas are available for tacos (we’ll get to those), including a habañero version that doesn’t mess around. The corn on the cob (called an elote on the menu) covered in butter, cotija, and herbs is fresh, sweet, and savory all together. They cure their own bacon just for the scratch pinto beans. (I joked with Tripp about all the work he’s doing just for beans and he promised a BLT was coming.) The mustardy potato salad and creamy cole slaw were fine versions of the standards, and the creamy mac-and-cheese was impressive in its richness.

After my first lunch, I talked with Tripp in the pit room. The city required an expensive hood and ansul system above each of the two smokers, steel offsets made by Allout Fabrications in Stafford, Texas. It’s an expensive set-up not required in other Texas cities, but it was important to the group to use all wood-fired smokers. So was making most of the items on the menu themselves. “We make everything except the bread and the ice cream,” Tripp told me. That includes the flour tortillas. 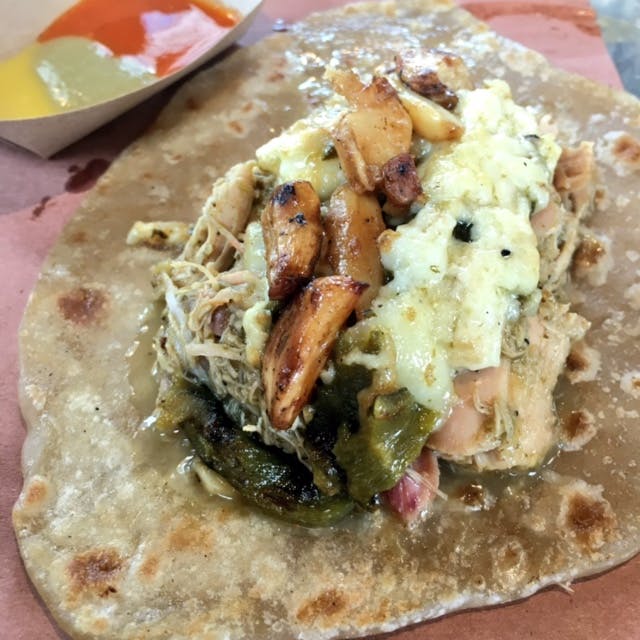 Tripp’s description of the tortillas sent me back to the ordering line. Instead of lard, Tripp saves the fat they trim off the raw briskets. “I put it through a meat grinder, then put it back on the pit and let it smoke into lard.” It gives the tortillas a depth of flavor unlike any I’ve eaten. They could work on the dense texture and the shaping, but these tortillas make one heck of a barbecue taco. At Tripp’s suggestions, I went with my last choice: the chicken taco. It was a flavor torpedo. Pulled chicken topped with green chiles, whole cloves of roasted garlic, and griddled cheese made for a big taco. There were so many intense flavors, it was hard to finish—though that may have been because I’d eaten too much already and I still had a pulled pork sandwich to go. Pork shoulder from a Berkshire/Duroc cross had been pulled and mixed back in with its juices. It was a bit wet, but the grilled bun was stout enough to hold up to the behemoth sandwich. 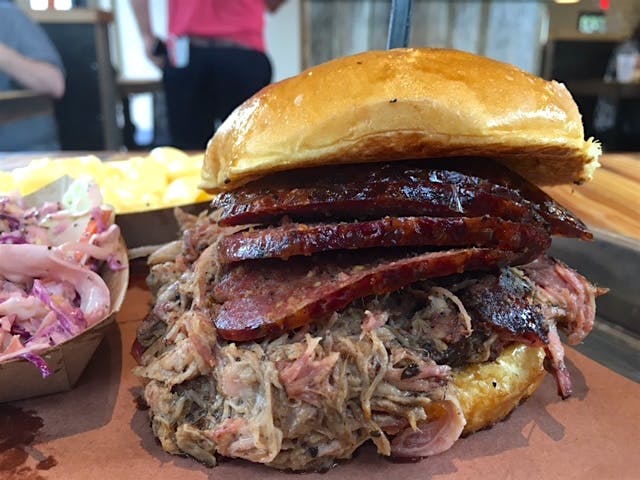 The Pit Room is still in its early phases. They plan to add dinner hours soon, and the menu will continue to grow. Look for some of the items next door at Jackson’s Watering Hole, which Sambrooks also owns. You might remember that name as the bar where Pappa Charlie’s Barbecue trailer was once set up. When Pappa Charlie’s left for his new brick-and-mortar near downtown, this neighborhood lost a great option for smoked meat. Now, with the Pit Room, the neighborhood and Houston has one more great barbecue destination.