Regular readers know that I review a barbecue joint every week. I highlight places that have an interesting story, or that serve one particularly good barbecue item, and when I can, I review new joints. As I travel around the state I usually have a few targets on my itinerary, but, considering barbecue restaurants in Texas are as much a staple of the small town landscape as the Dairy Queen and the locally-owned donut shop, I like to leave enough time to stop in random joints. The hope is always to find that hidden gem—this tactic is, after all, how Texas Monthly‘s Katy Vine found Snow’s—but obviously enough, finding the hidden gem is about as common as finding a real one in the parking lot of the joint I pull up to. More often, I find middle-of-the-road barbecue, but sometimes it’s just plain bad.

There’s this one memory I get in my mind when asked about the oddest thing I’ve seen eating barbecue. I went to this barbecue joint (now closed) looking to try their garlic-stuffed brisket. I imagined thick slices of brisket studded with big cloves of garlic, like you might find in a leg of lamb roasted Sardinian-style. What came out looked like wounded flesh. Instead of whole cloves, they’d used some heavy gauge injector to squeeze in that oil-soaked, pre-chopped garlic that comes in a jar. It tasted of beef marinated in rancid oil, a flavor I never wanted to taste again. Here are a few other places that I’ll likely never return to:

Lubbock was forty miles behind me when I passed the newly opened Wagon BBQ in a converted Post gas station. It looked promising, but they had closed up early. Just a few blocks away was George’s Restaurant with “BBQ” written prominently on the sign. I drove around back and found the door to the pit room wide-open. I got my hopes up seeing the wood-fired offset smoker and a large stack of wood. 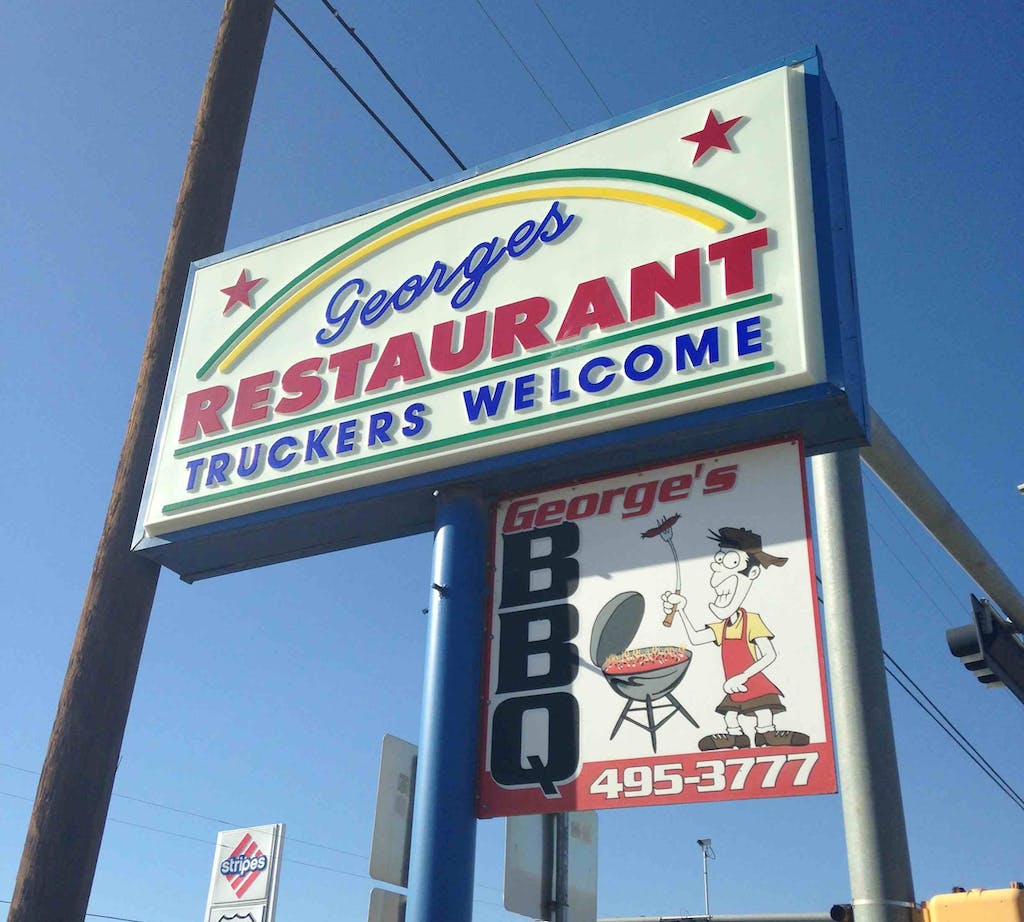 The menu was varied, and the back page was all barbecue. Ribs had been crossed out with a Sharpie so I went with sliced brisket and German sausage. Cigarette smoke wafted by as I waited for my order at a table near the door. There wasn’t a smoking section so much as a few smoking tables. I was happy to take my order to the car. 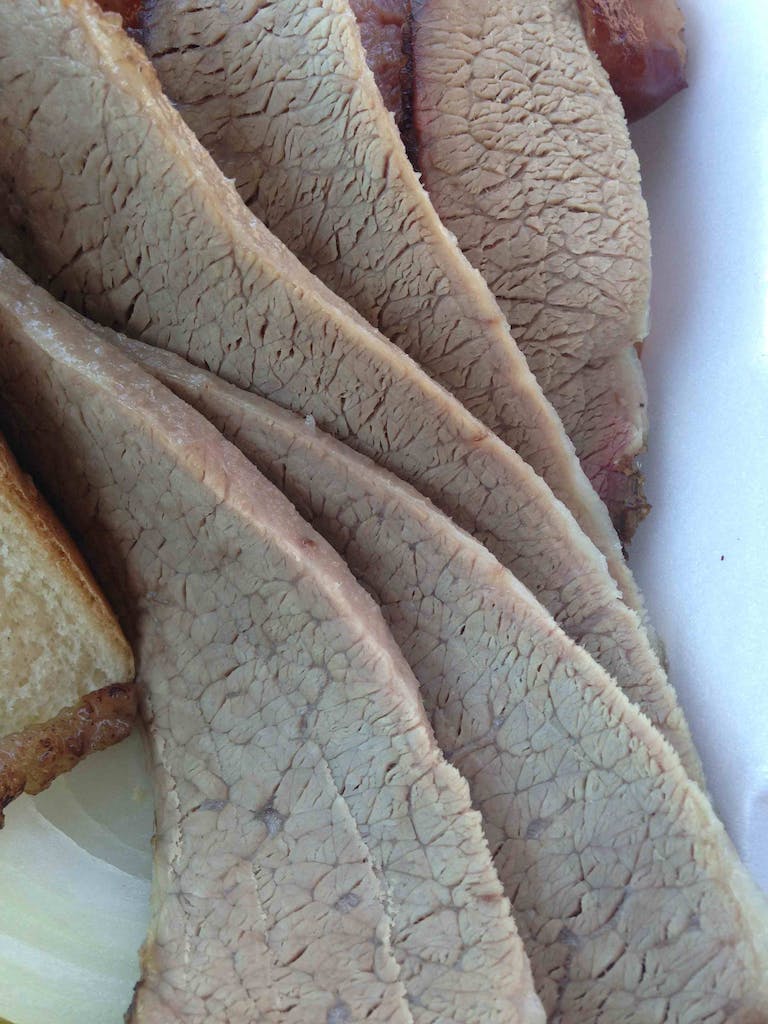 The German sausage was an insult to Germans. Cheap commodity kielbasa has no German provenance, but it seems to pervade the menus of West Texas. Stop calling it that. I took one glance at the brisket and knew I wouldn’t be finishing it. It looked more like wood trimmings than brisket. I braced for my first bite, but it didn’t actually taste like much. It was like the sensation of picking up an empty jug of milk that you think is full. The flavor was so completely empty it was jarring. 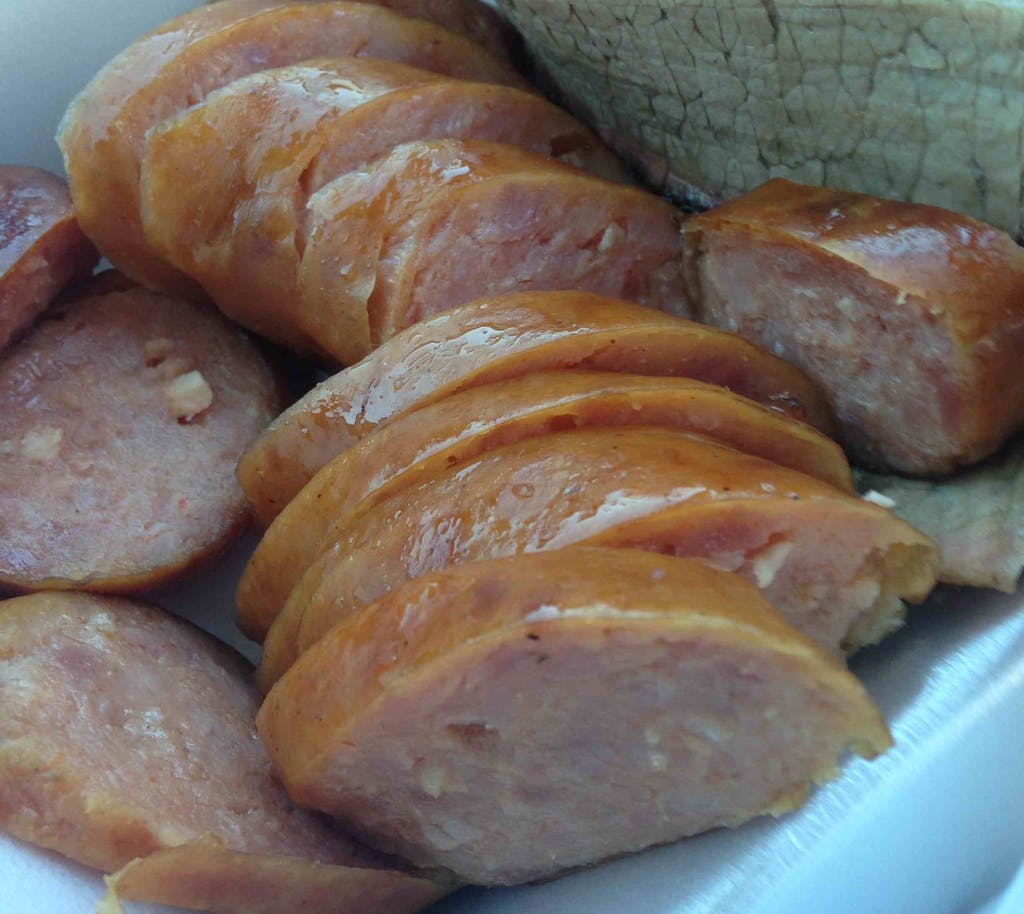 This new entry among Waco’s barbecue options could have really made an impression in a town without a lot of quality barbecue. I may have been the first customer of the day when I went by at 10:30 a.m. I was traveling to Austin, so I took the meat on the road. Before I opened the boxes, I smelled smoke, which is normally a good sign. This time it just meant meat with way too much smoke on it. 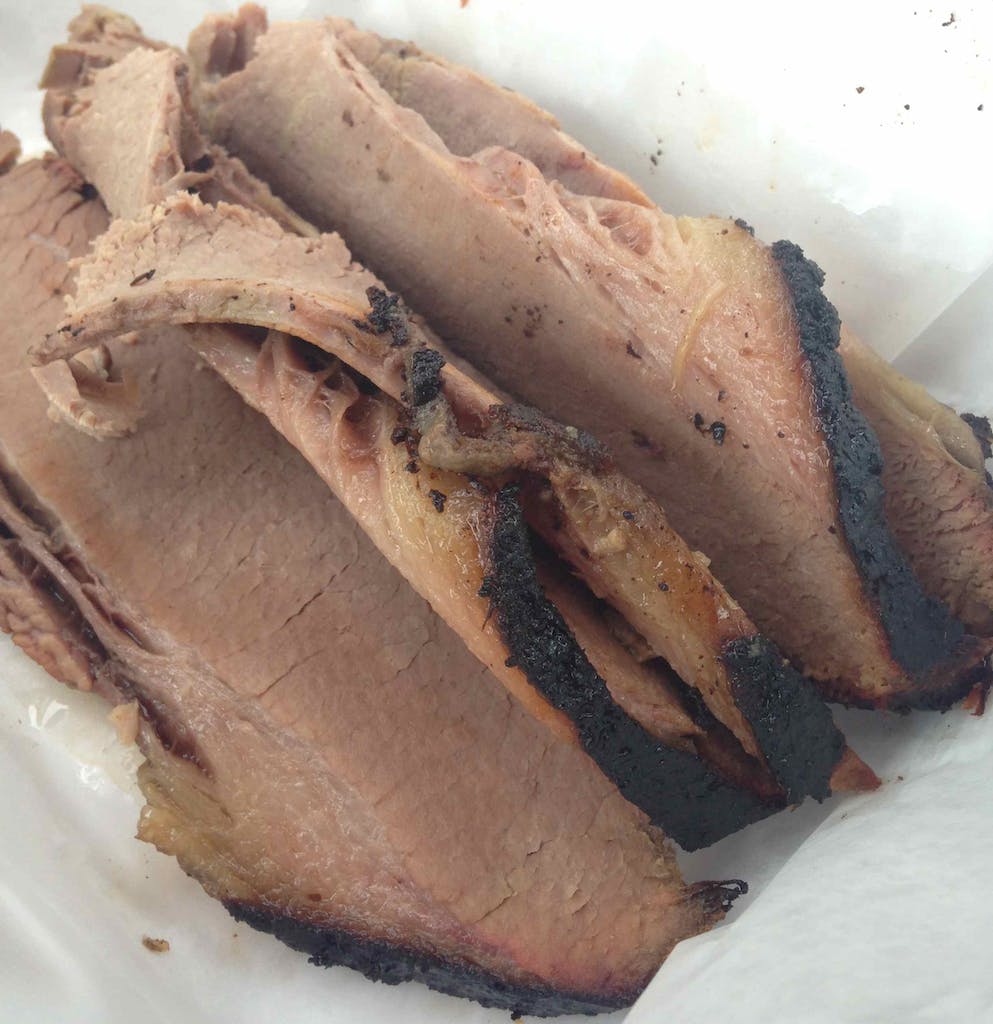 The day I had it, I tweeted that it tasted like dirty smoke. Some people were confused about what I meant. It’s simple. Wood that is actively burning produces clean smoke that is white or blue. If you choke off the oxygen to the fire it will smolder, and you’ll see thick, dark gray (dirty) smoke. This poor quality smoke carries flavors like creosote, and the meat ends up tasting like it was brined in a dirty ashtray. 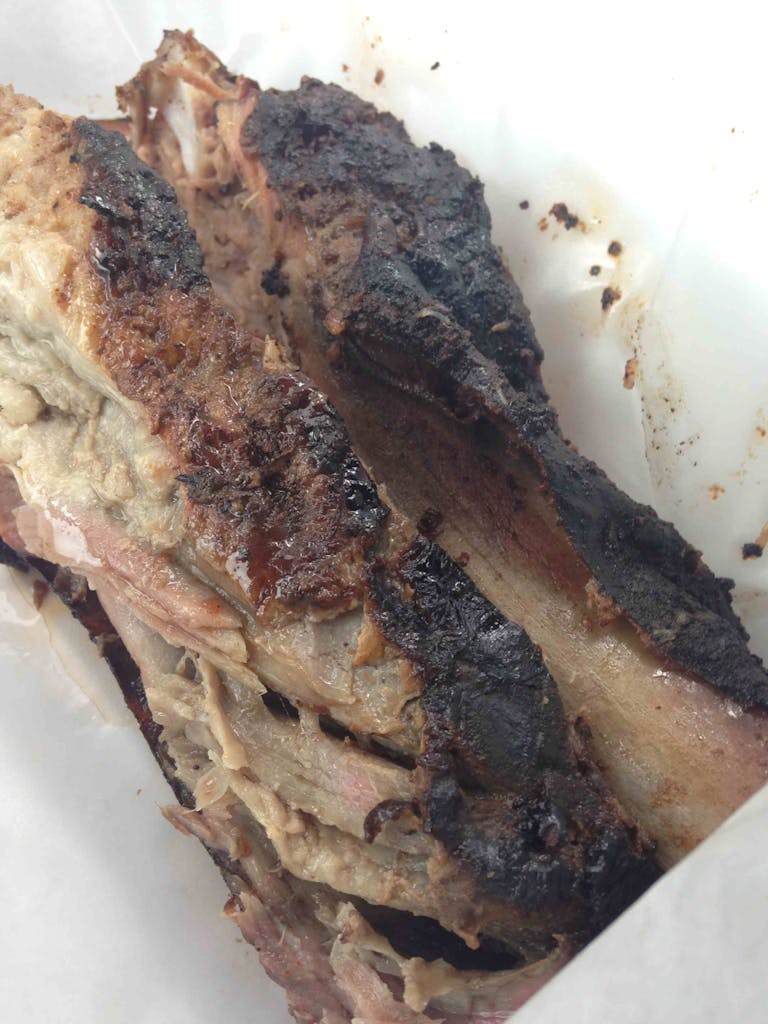 In fairness the most popular menu item here is probably a chopped beef sandwich. I went for a combo plate of brisket, ribs, and sausage. A thick layer of unrendered fat had to be peeled off the ribs before I wanted to take a bite. The end cuts of brisket were dry, undercooked and chewy. The sausage was bland, but at least the sauce was good. You’ll need it. 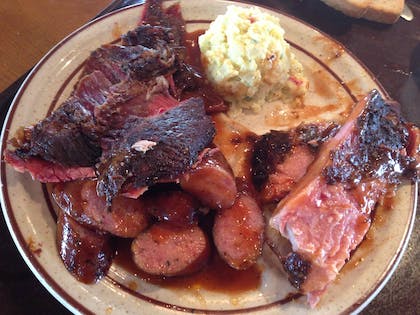 It’s pretty easy to recognize when you are not eating fresh barbecue. The meat is drier, and the texture degrades. It was a Friday, but it might have been Monday’s brisket and ribs at the Mesquite Pit. 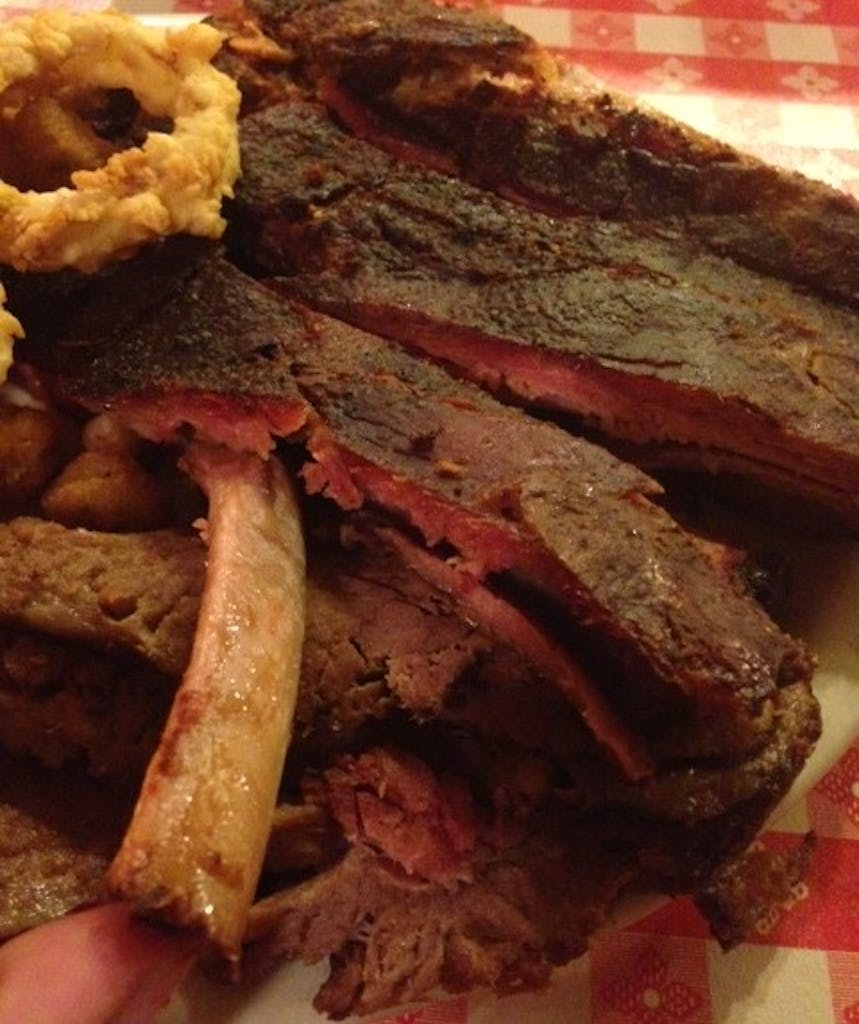 I tried to pick up a spare rib, but the bone slipped out. A few bites of the pork tasted like burnt spices and heavy smoke. The meat was so dry, it flaked away from the massive ribs, and it seemed like the chewing never ended. Brisket had the texture of a wet sponge, and the flavors were washed out. I didn’t need more than a couple bites to realize I should just be happy with the corn muffins and onion rings. 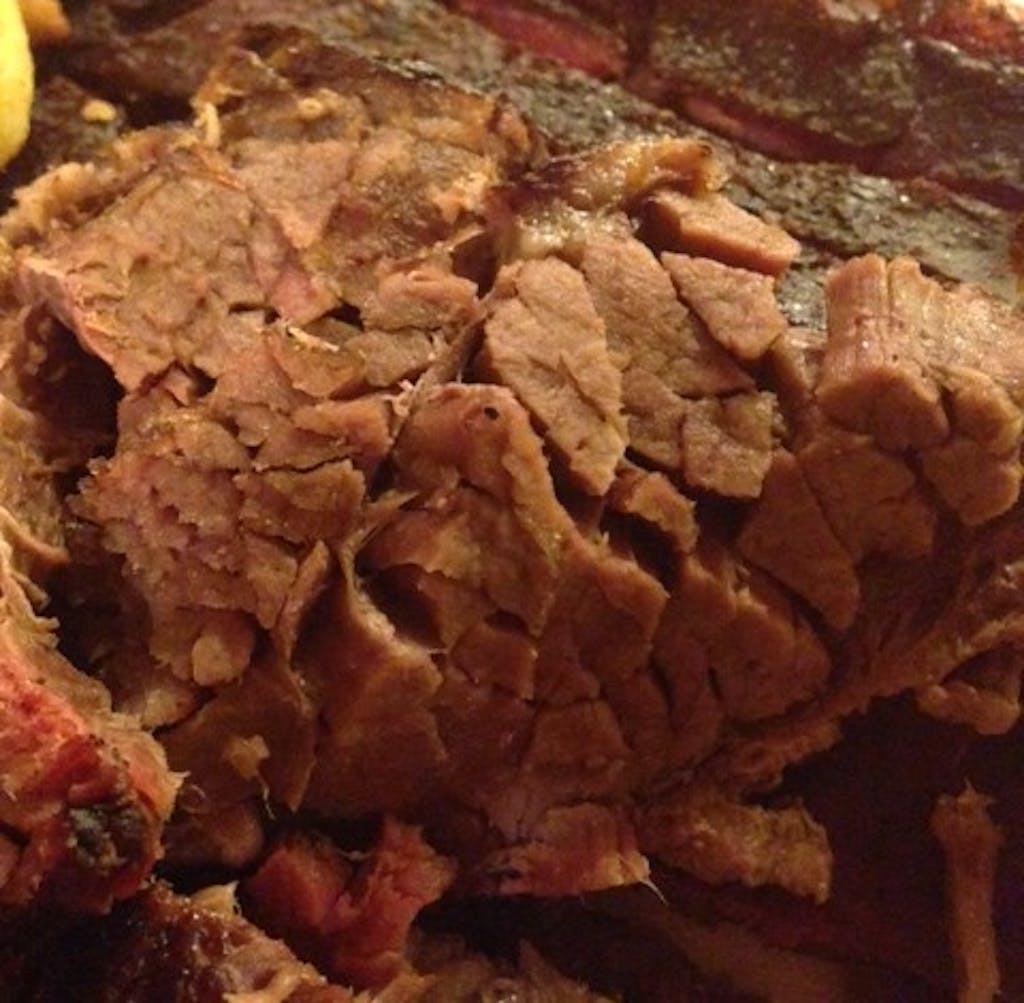 If I’m going to make a barbecue discovery, chances are it will have to be a new barbecue joint. Event though Blanco BBQ had only been open for a few weeks when I visited, the word was out. Online reviews were split, but the parking lot was full. The multiple cash registers, “moist” and “lean” brisket, and creamed corn on the menu were all reminiscent of Rudy’s. I took in the immaculate interior as I waited for my order, and the order coming out looked promising. 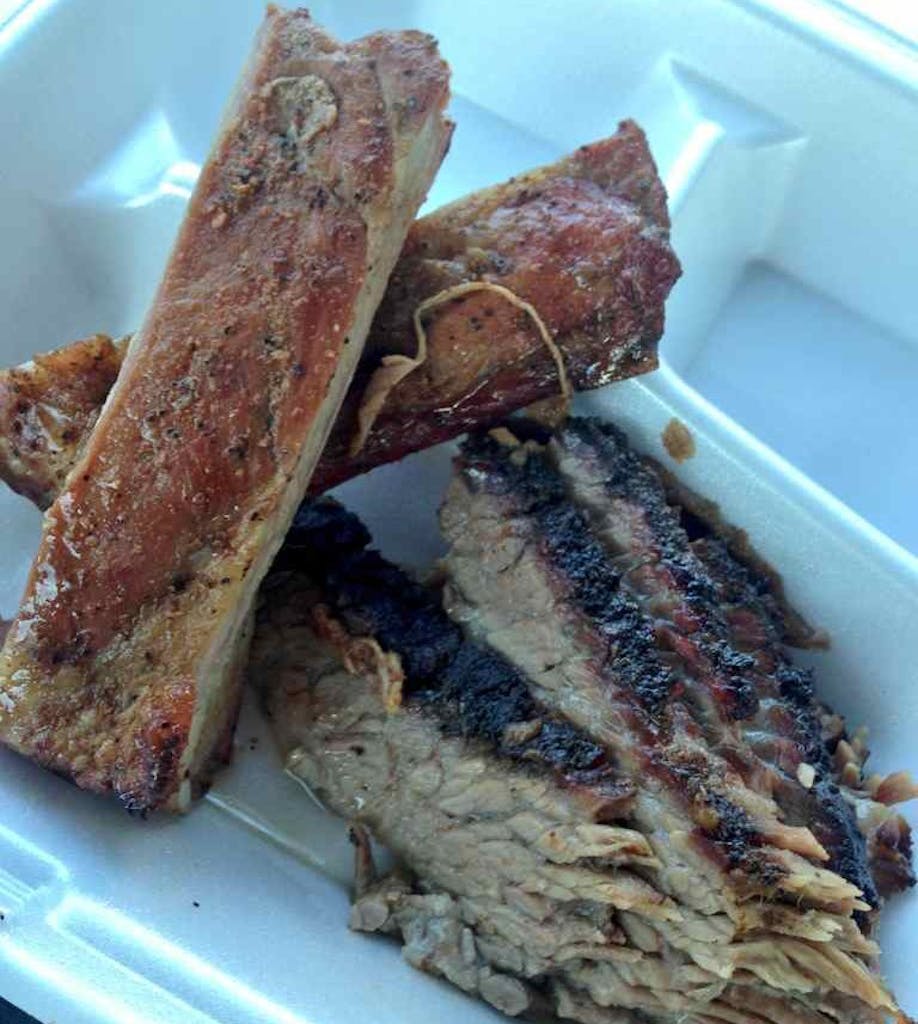 The ribs and brisket I got looked decent; then I took a bite. I like my ribs to require a little tug to get the meat off the bone, but these needed a stronger jaw than mine. It would have taken another couple of hours on the smoker to make them edible. The brisket suffered from the same issue. They were so undercooked the slices sprung back into shape when I tried to tear them apart. They have plenty of mouths to feed here, but they need to be a lot more patient with the meat.

I love writing about great barbecue that I find, and it’s not rewarding to write a negative review. But knowing where you might find disappointment is just as relevant to my readers. And maybe singling out a few places that aren’t doing things right will help prod them into tweaking or changing the operation. With so many great options for smoked meat in Texas, there’s no need to settle for bad barbecue.