A tattered banner hangs on the side of the small building that houses Tons of Fun BBQ. The restaurant sits on a gravel lot along the main drag of Bartlett, a town of just over 2,000 residents that’s midway between Temple and Taylor. Inside there’s just a counter and a cash register. Takeout is the only option.

All that to say that it’s not a business that spends big money on marketing or furnishings. So it’s ironic that on my two visits, it was one high-dollar item behind the counter that has been their downfall: a stainless steel cabinet warmer. 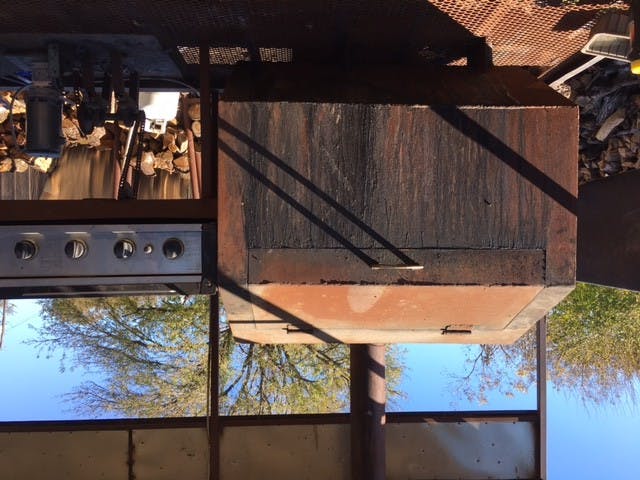 Pitmaster Paul Concho pulled all of the meats for my orders from the warmer, its gleam standing out from the grease-stained trio of custom steel rotisserie smokers mounted on a trailer out back. His unique smokers provide a distinct cooking method, and thus flavor, of the meat; indirect smoke provides most of the smokiness, but for a short part of rotation, the meats are directly above the fire, dripping fat onto the coals. A bite makes one question if the meat is smoked or cooked with direct heat, but given the construction of Concho’s smokers, it seems fair to say it’s a little of both. That flavor lingers—even from meat served past its prime.

The meat probably isn’t dry before it goes into the warmer, but it sure comes out that way thanks to the cranked thermostat of the warmer. Instead of holding right around the health-department-required minimum temperature of 145 degrees, at Tons of Fun they push it to the limit of the machine at 190. The difference makes for overcooked meat that dries out a minute after it’s sliced. 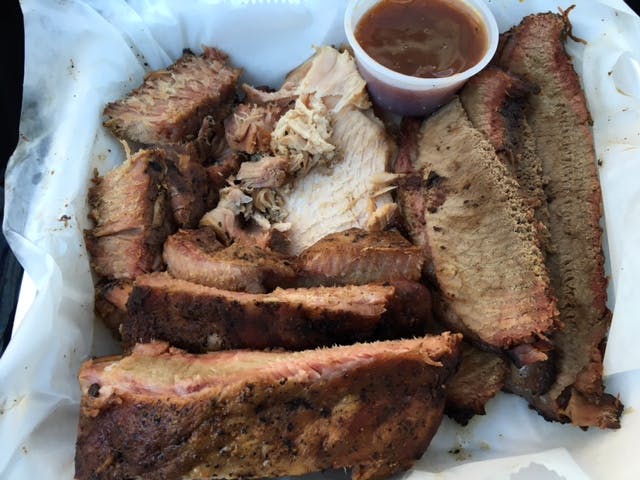 We’ve discussed the importance of resting, of getting the meat back down from its steady climb toward 200 degrees. What’s also important is not to continue the cooking process. Not only does a warming temp of 190 not allow the briskets to cool enough so they won’t release steam (moisture), when they’re sliced, that elevated temperature is also continuing the release of moisture through sustained cooking of the meat.

I watched meat fibers curl up and shrivel on a slice of pork steak. Steam wafted out a large brisket on the block, and the slices went from moist to bone-dry by the time I got to the car. The ribs and turkey weren’t much better. Again, the flavor wasn’t the issue. It all tasted like great barbecue in need of tall glass of water. At least they didn’t douse it in sauce, as that would go against the company motto: “We’ve got nothing to hide, so we serve our sauce on the side.” 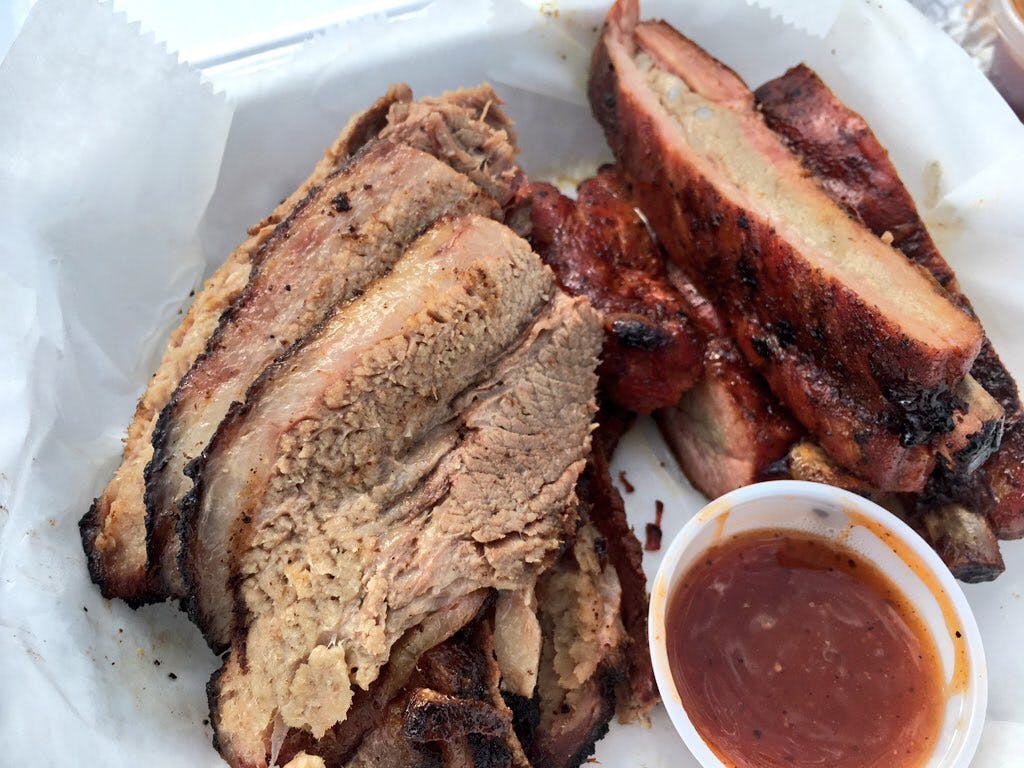 My first visit was just after the lunch hour, so I went early the next time. At just after 11:00 in the morning, items hadn’t had so long to continue cooking in the warmer. It was a far better experience, in spite of the expensive electric warmer. 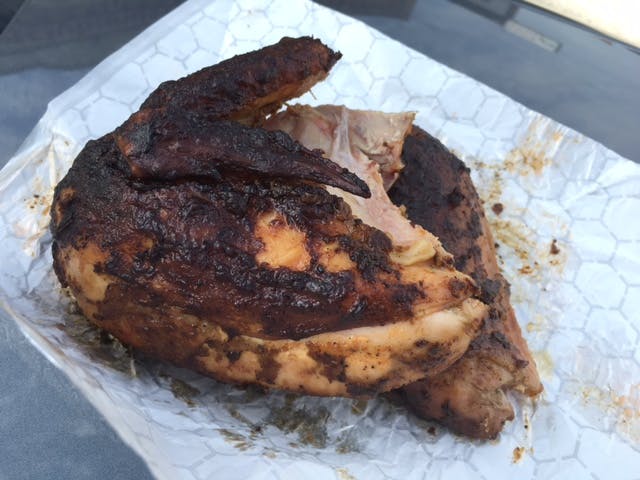 The half chicken, the special of the day at $7, was the smokiest of the bunch. It was a sweet, sticky, smoky layer on the browned skin. With the added moisture on the skin it was dang near impossible to get it crispy, but the meat beneath was juicy. The ribs also had good smoke and bold seasoning. They needed a little more effort than I’d like to get meat from bone, but they were enjoyable. The lean brisket showed some signs of dryness, but slices from the fatty end were just juicy enough. 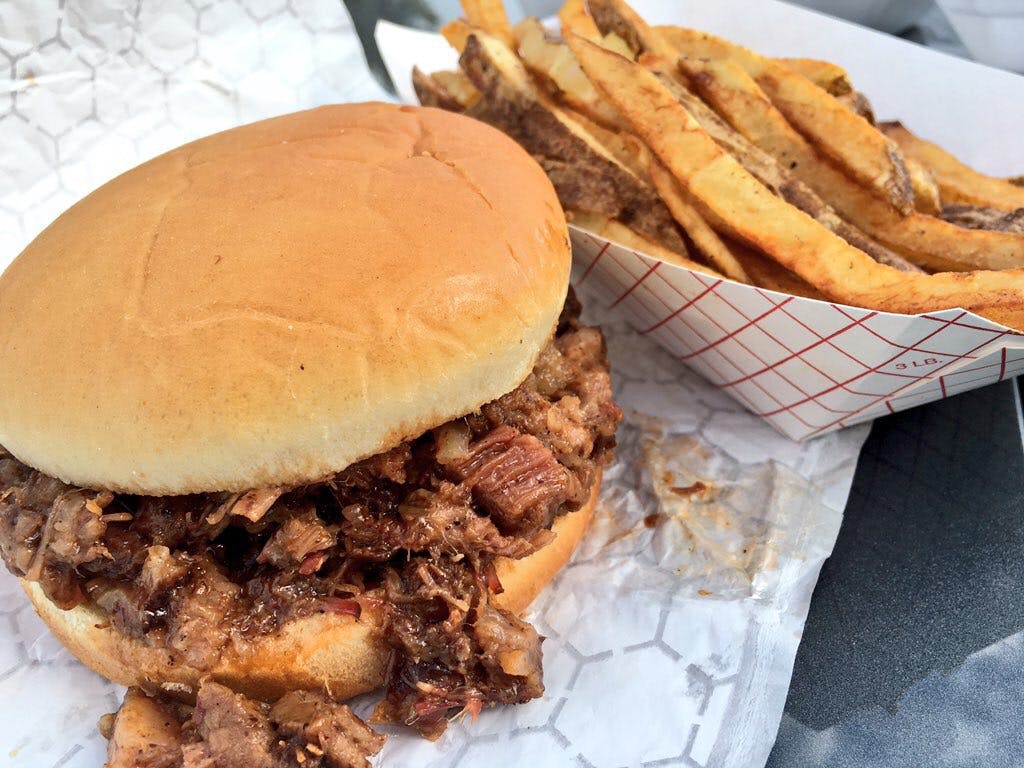 Maybe the best combo on the menu was the chopped brisket sandwich and a side of fries. The fries are fresh cut and fried twice. They’re salty and crispy, and go perfectly with the saucy chopped beef. Rather than chopping the beef vigorously, Concho cuts it into large chunks, squeezes sauce overtop, then kneads the whole things together with his fingers. It forms a cohesive mass of smoky, sweet beefiness on the squishy white bun. It’s great, and is one menu item that doesn’t suffer much from overheating in the warmer.

They’ve got a good start here in Bartlett. All-wood cooking, good smokers, and a guy who knows how to use them make for a pretty solid foundation at any barbecue joint. If they found a better way to hold the finished product—or just turned down the temperature—Tons of Fun BBQ could be serving great barbecue instead of just tons of potential.