A Denison newspaper described Al Hall as “a magnificent specimen of physical manhood.” When a local alderman pistol-whipped him during an argument at Hall’s barbecue joint in 1891, Hall retaliated with two swift punches to the face, sending the alderman home in a carriage. “Blood flowed quite freely,” noted The Sunday Gazetteer*. But that’s not what got Al Hall arrested. He found himself on the wrong side of the law a month earlier for “violating the Sunday law by barbecuing and selling meat on the Lord’s day,” according to the paper.

If you’ve ever enjoyed barbecue on a Sunday in Texas, you can thank Hall for helping to break those barriers of Sabbath smoked meats. His first trial ended in a hung jury, but he was vindicated in the second. The editor of the The Sunday Gazetteer provided his support for the acquittal:

It is a great convenience to tired housewives, who need Sunday rest as much as any class of people in the community, to be able to get cooked meat already prepared for the table and smoking hot at meal time, and the spirit of the law is most assuredly not violated in making this possible.

The following year, the Moton Bros. City Market advertised “choice barbecued meat” available every day of the week. So it seemed Lem Moton, who had turned in Hall to the authorities, had changed his tune about smoked meat Sundays.

Hall was an unlikely villain, anyway. He was a Denison pioneer and had served as a policeman in town starting n 1877, just five years after its founding. Hall caught horse thieves and broke up illegal gambling rings, which were a common problem locally, but he just missed collaring the local dentist turned infamous gambler, John Henry “Doc” Holliday. His gambling got him kicked out of town for good in 1875.

The city was growing fast, but money was still tight. When the taxes could only support one police officer, Hall was let go in 1879 and took a temporary job as a night watchman before opening a lunch stand later that same year. The son of a preacher from Missouri was serving “oysters, wild game, chicken, and sausage” inside Boland’s Saloon, which at one time housed a live buffalo and two bears as visitor attractions.

Food service seemed to be Hall’s passion. From an elegant oyster supper and the Brunswick Bay soup he served at the Southern Methodist outdoor social to a fish fry on the Red River, Hall’s cooking prowess always received rave reviews. The smoked meat business was in Hall’s future, but he first had to overcome his complicated relationship with barbecue. In the late 1870s, a cholera epidemic struck Denison, and it spread rapidly after a big July Fourth barbecue in Forest Park presided over by Hall. After the outbreak, he was convinced that the meat was somehow tainted. When as many as 200 residents perished from the disease, Hall blamed himself for infecting the town with cholera-infected barbecue, even if the doctors didn’t.

It took fifteen years before he jumped back into barbecue with a joint at the corner of Rusk and Chestnut in 1891. It was described by the paper as a “barbecued meat and soup establishment,” an unlikely pairing. It was popular, especially on Sundays—much to the chagrin of his barbecue competitors like Moton, but also to the church ladies who had previously cornered the market on Sunday meals that they had prepared ahead on Saturday nights. After tasting Hall’s hot barbecue, “cold Sunday dinners have ceased to be in demand,” The Sunday Gazetteer reported.

The accolades didn’t keep Hall settled long. He was off to Greenville on a railroad contract. He would reappear in a call seeking buyers for “a quantity of dressed ‘possums,” and again in a report that he had one hundred hogs ready for slaughter just before the Christmas holiday. He tried again for a spot on the police force as chief of police, but after losing the election, Hall travelled to Chicago for the World’s Fair in 1893. He was back in Denison by late summer planning the resurrection of his barbecue stand.

Beef, pork, and mutton received equal billing on the new menu. “Mr. Hall uses only the best meats and understands all the mysteries of barbecuing,” the local paper promised. But Hall had bigger aspirations than a little barbecue stand, like a Chop House on Main Street serving wild game and oysters. It didn’t last long, so he headed to Dallas where he ran a saloon. Maybe he got word from Denison that McMillin & Co. claimed that their “barbecued meat and chickens have no opposition,” or that Tom Williams was boasting about his own barbecue back home. An ad on June 7, 1896 claimed that the barbecued meats at of Mr. Williams were “conceded to be the best cooked in Denison.”

A week didn’t go by before Hall announced his third foray into barbecue, and the local paper was happy to remind everyone what they’d been missing for the last few years. “There has been plenty of imitations, but no one has been able yet to give beef that delicious flavor and crispiness like Hall,” they promised. “Al’s barbecue beef is a joy and revelation.” Twenty-five head of cattle were “cooked to the Queen’s taste” by Hall the first week back open, and he was serving it with something called French gravy. This iteration proved to have staying power. John Smith, a protégé of Hall’s, opened his own place a couple blocks away using the same cooking style and French gravy. It seemed Hall was now an influential pitmaster.

In late 1896, Hall promised a new addition to the menu. It was the latest fad that “will make the sick healthy and strong.” On September 20, he revealed the miracle item to be “ox-marrow stew.” Yes, the latest health fad in North Texas over a century ago was bone broth prepared by a pitmaster. Despite his claims that it was a miracle cure, the ox-marrow elixir didn’t save him from the bowel inflammation that killed him a month later.

Hall was gone, but his barbecue legacy lived on, at least for a while. Smith returned to run Hall’s restaurant, vowing to keep the “renowned ox-marrow soup, barbecued lunches, celebrated French gravy.” A year later, John A. Gray would take over the stand and the recipes. He called himself “The Barbecue Man,” in weekly newspaper advertisements as late as 1902. Harry Fatum would be the town’s next pitmaster. In 1906 he promised “the nicest, most delicious barbecued meats in Denison.” The ad had no mention of ox marrow or the French gravy—the recipe of which we can only guess at—but hopefully the folks in Denison could still get their Sunday barbecue fix without Hall.

* Most of the details mentioned in the article come directly from the digital newspaper archives on The Portal to Texas History. 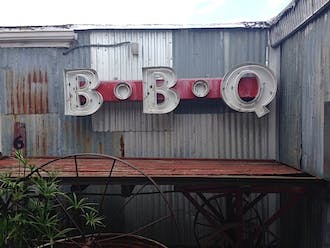