Yesterday afternoon Dan Patrick, the lieutenant-governor, effectively announced that Texas will not proceed with plans to make drastic cuts to the Medicaid Acute Care Therapy Program.

That’s my interpretation, anyway. Technically, what happened is that Patrick and Jane Nelson, the Senate Finance chair, sent a letter to Health and Human Services Commissioner Chris Traylor elaborating on the legislative intent behind the budget rider in question and emphasizing the imperative for HHSC to take a closer look at how the cuts will affect access to care. Only at that point would the new plan become official.

And awkwardly enough, yesterday’s news reports offered conflicting updates. The Texas Tribune reported that Patrick had offered a “sternly worded defense” of the cuts in his statement accompanying the letter. According to the Dallas Morning News, though, Patrick and Nelson had told Traylor that the budget’s call for $350 million in cuts was a goal, not a requirement. I can see a case for either interpretation. The ambiguity is in the letter itself. The rider proposing the cuts, Patrick and Nelson say, “was purposefully written” to allow HHSC some flexibility: “If there are vulnerable citizens in need of services we expect you to assess and address them as vigorously as pursuing cuts in waste, abuse and fraud.” Several months from now, then, HHSC officials might report back that they can make some cuts without jeopardizing access to care; that would depend on whether they can find any ways to whittle away wasteful spending while preserving access to care.

On examination, though, I believe Patrick has tabled the issue. That was the right thing to do, under the circumstances, and although he realized the problem belatedly, Patrick is the kind of person who would react to such a realization by doing the right thing. I can’t read his mind, and politicians are politicians; maybe I’m missing something. But for all my problems with his budget math, this is consistent with my longstanding understanding of his character. As a state senator and a private citizen, Patrick has always been a vocal advocate for Texas’s children. His rhetoric sometimes strikes me as schmaltzy and he’s come up with some pretty half-baked schemes to help them, but I don’t doubt the sincerity of his intentions, which he has expressed repeatedly and passionately over the years.

A couple of details in the letter corroborate that view of things. First, Patrick’s co-author is Nelson. She sent her own letter to Traylor last week, emphasizing the Lege’s expectation that HHSC consider access to care before proceeding. When I wrote about the controversy a couple of weeks ago, I noted that I found her contribution particularly telling. The cuts came from the Senate; if the Senate’s chief budget writer was having second thoughts about them, that was a pretty clear sign that the cuts might be avoided. And since this letter is consistent with Nelson’s first one, it stands to reason that Patrick and Nelson are on the same page there. Second, the letter says that the rider gave HHSC a chance to achieve “$100 million in savings.” That figure refers to the state share of spending. If Patrick and Nelson were defending their cuts, they’d include the federal matching funds; $350 million in spending cuts is more impressive than $100 million, unless you’re feeling queasy about the cuts.

If it’s not too persnickety, I’ll note that it really wouldn’t be unreasonable for Texans to expect their elected officials to think about the potential implications of spending cuts before they pass the budget. There’s no guarantee that such situations can be fixed after the fact; if not for the legislators, reporters, advocates and families who spoke out, HHSC might already be implementing these cuts. I hope the Lege takes that lesson to heart. For my own part, I can say that Emily DePrang’s reporting on this story helped me learn not to be so completely cavalier about Medicaid cuts. To be clear, I still don’t like Medicaid. If HHSC can substantiate waste or inefficiencies in the program, cruel conservatives of Texas can count on me to help make the case. But the need for substantiation is non-negotiable when there’s little kids at risk; even us “cold-hearted” fiscal cons should be able to see that.

A number of politicians can learn from Patrick’s example here, too. Ideally everyone would get everything right the first time. But if that’s not possible, correcting course is better than doubling down. As a powerful statewide official with a talent for getting embroiled in controversy and with plenty of critics, Patrick would have had to weigh the benefits to the vulnerable citizens against the costs to himself. It’s a sign of character that he made the right call.

UPDATE: While I was finishing this post, as it happens, Traylor was sending a response letter (PDF here) to Patrick and Nelson, confirming that he had received the message: “I understand your letter to direct HHSC to preserve access to care even if it means the full rate reductions contemplated by Rider 50 cannot be achieved.” In other words, it’s official: Texas is holding off on its plans to gut funding for therapy for poor and disabled children. 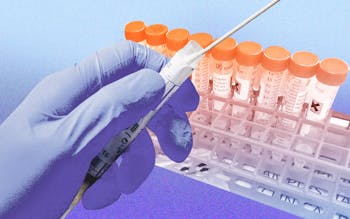