Questions over four paper ballots in the Dan Neil-Donna Howard squeaker prompted Special Master Will Hartnett to order a recount of about 250 paper ballots in the West Austin state representative race. An official recount in December put Democratic incumbent Howard 12 votes up over Neil, but testimony in a hearing this week has dropped her lead to 6 to 8 votes. (Depending on whose lawyer you believe.) Howard attorney Buck Wood believes that the Travis County recount in December properly subtracted the votes of the four paper ballots from Howard’s official total, but testimony from former Travis County Judge Bill Aleshire failed to convince Neil’s attorney, former State Rep. Joe Nixon.  Wood argued that a recount of three boxes would resolve the issue with finality — in his client’s favor. This afternoon, Hartnett agreed to recount the three boxes. Both sides have called voters to testify about their ballots in an attempt to secure the District 48 seat. More voters are expected tomorrow morning, and more may be called Monday, according to Wood. Hartnett will issue a report of his findings to a committee, which will report to the full House, which will make a final determination of the contest. Given the closeness of the race, it is hard to imagine a Republican-dominated House declining to seat Howard — as they say, the “optics” of the situation would not be good. If Hartnett’s report favors Neil, however, it seems likely that a new election will be ordered. Is that a win for Neil?  Back in November, he almost rode an anti-Obama wave from near anonymity to  a seat in the Texas House. But in a few months, in a special election, will he fare so well at the polls? Howard will have a different set of issues to talk about with voters: school budget cuts and school closings will motivate a lot of parents to get to the polls. Wood, who has served as an attorney in lots of contested elections, says a re-do rarely benefits a challenger. Voters are especially unhappy with candidates who require voters to get on the stand and reveal their private voting booth decision. I asked Nixon about the political strategy behind Neil’s challenge. “We want the Legislature to confirm and seat the winner,” he said. Beyond that, he noted, the integrity of the process requires that close attention be paid to close races. “We can’t just say we are not going to look because it is uncomfortable,” he said. 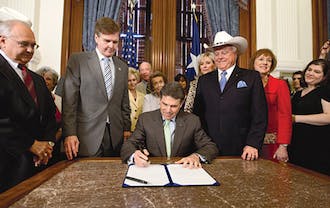 I spoke too soon

The fight from the right againt Straus