If the current political rule of thumb in Texas were “as goes the Republican primary, so goes the state,” then local cities, counties, and school boards are in trouble. Republican voters hold significantly more positive views of the state government than their local governments, and don’t look askew upon the state overruling local entities, as we found in our most recent University of Texas/Texas Tribune survey.

Politicians for years—Republicans in particular—have been invoking “local control” as the antidote for what they describe as an over-reaching federal government. If the state government wasn’t the answer, then the local school board was. But our survey found that the invocation of local control so familiar to Texas politics doesn’t carry much weight with voters. The principle appears to have little gravity with voters beyond an abstract appeal that is easily overruled by the more powerful dispositions in the universe of political attitudes, like partisanship, ideology, and material interest.

Perhaps this is why Governor Greg Abbott, at a recent conservative forum in Corpus Christi, felt free to sweep away the idea that local government knows better what the people want than state officials. Specifically, the governor said, “A broad-based law by the state of Texas that says across the board, the state is going to preempt local regulations, is a superior approach.”

Abbott’s comment might be the harshest admonition yet to local authorities struggling to defend their autonomy during a legislative session that seems to be hearing bills on a daily basis that would decrease, rein in, or circumvent “local control” over many issues. In some of the most prominent legislative fights currently underway—from sanctuary cities, the regulation of transgender people’s access to public and school restroom and changing room facilities, to increasing checks on local tax rates—the forces of state sovereignty are mounting an offensive on issues that revolve around the axis of conflict between the authority of state and local governments.

In an effort to assess attitudes about legislative attempts to impose statewide structure on local decision-making, in our February 2017 survey, we asked about the Legislature’s attempts to overturn the actions of local entities. We decided to focus on two scenarios devoid of specific issue context. We used a split sample so that half our respondents received one version of the question and the other half received the other.

The first question was: “Generally speaking, do you approve or disapprove of the Texas Legislature passing laws designed to override measures adopted by local governments?”

Less than a third—29 percent of Texas voters—approved of the Legislature passing laws that would override measures adopted by local governments, 39 percent disapproved, and 32 percent had no opinion. Democrats were more likely to disapprove (57 percent) than were Republicans. That’s not a particularly surprising result given that any restrictions on local control under current circumstances would be enacted by the Republican Legislature and governor. Inversely, 42 percent of Republican voters approved of the state government overriding local governments. Lest you think that self-described conservatives or tea party Republicans might be more likely to defend local autonomy, they didn’t: 43 percent of conservatives and 51 percent of Tea Party Republicans approved of state control over local. 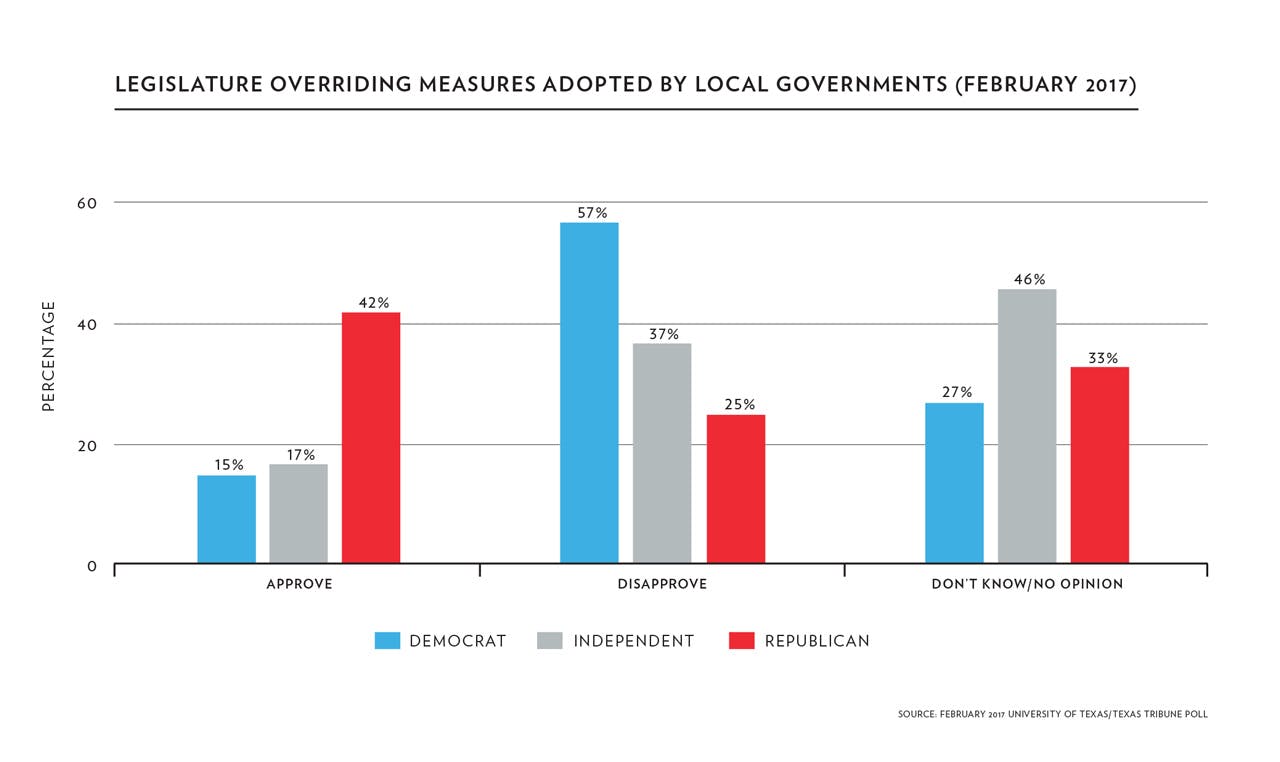 In the other version of the question, we asked: “Generally speaking, do you approve or disapprove of the Texas Legislature passing laws designed to override measures adopted by voters in city and county elections?”

This time, the entity being overturned isn’t a local government, but local voters. Replacing government with voters produced significantly different results in the other, randomly selected half of the sample, with 56 percent expressing disapproval at the Legislature passing laws that override local voters. Only 15 percent of Texans approved in these situations. Among Republicans, 42 percent expressed approval of the Legislature overturning the actions of local governments, only 23 percent approved when the voters themselves were being overturned, with 48 percent disapproving. Among Democrats, only 8 percent approved of overturning the actions of local voters, 63 percent disapproved. 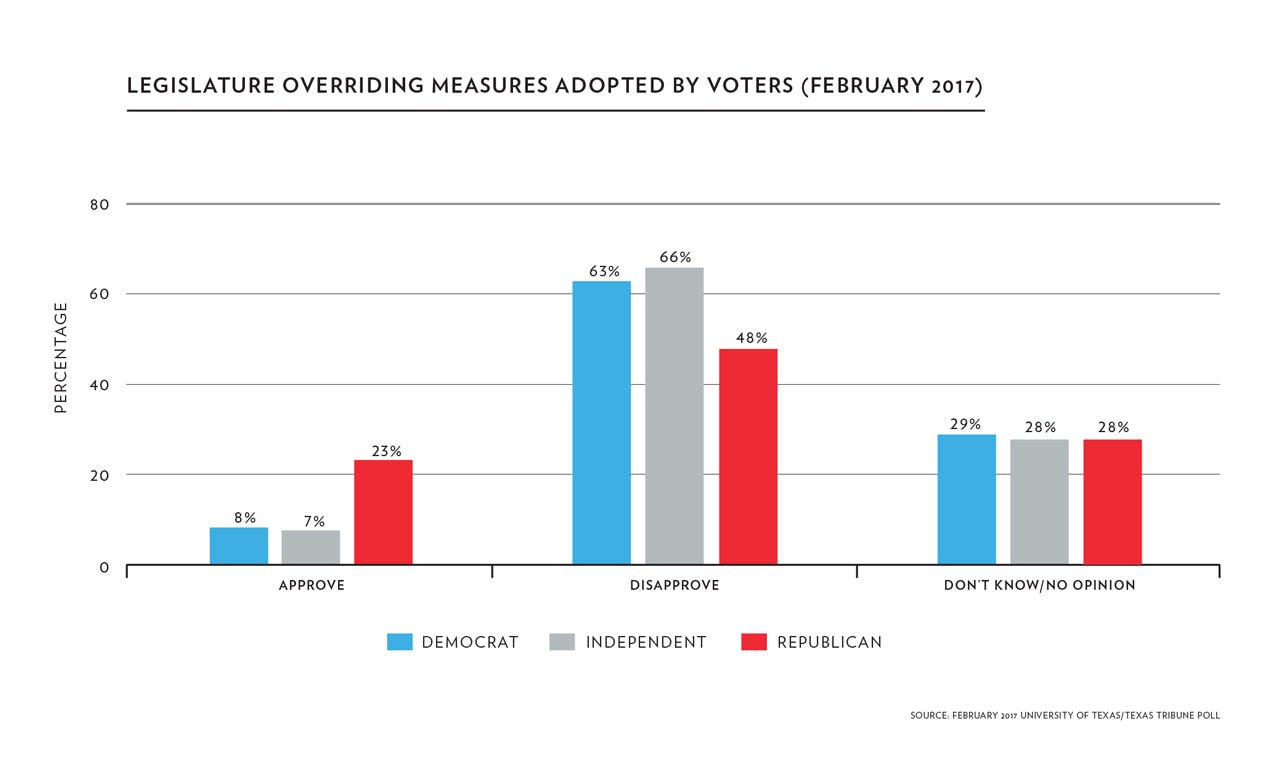 Deploying the principle of local control as political rhetoric depends at the very least on there being enough of an audience for such an appeal. Among voters, at least, the principle of local sovereignty appears to have shallow cognitive roots: people attach value to it in the abstract, but it is easily crowded out by other more established attitudes. So “local control” can be both readily applied when it’s consistent with what people already prefer, yet easily discounted when it conflicts with other, more deeply formed attitudes. It’s unlikely that all but a small handful of voters have a strong opinion about what level of government is best for administering government functions, let alone the even more arcane judgment as to what level of government should make decisions on particular issues.

As always, patterns in public attitudes inevitably get incorporated into the strategies of interest groups in state politics. The absence of deep-seated attitudes supporting a principle of “local control” gives organizations and interests promoting a stronger hand for state government room to provide scaffolding for state leaders’ impulses to overrule local decisions. If Republican voters think Uber and Lyft leaving Austin was just another instance of Austin liberals inhibiting free enterprise and innovation, the principle of local control won’t stop them from embracing statewide rule-setting by the Legislature. When Republican voters feel the pinch of rising property tax bills, they are that much more likely to favor the state limiting the locals’ ability to raise tax revenues without voter approval, all things being equal.

Some ideas have longer shelf lives based on more durable appeal than others. Local control as we once knew it has passed its expiration date.